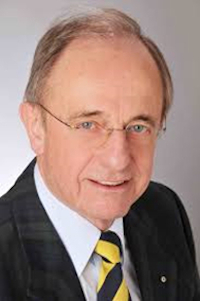 Düsseldorf, Germany—"Comments on the Legacy of Stephen Hawking" was the topic of a webinar presented by UPF.

Dr. Joachim F. Reuter, an author and leader of the Rotary International service organization who for many years has been interested in quantum physics, gave the main talk in the June 15, 2020, online meeting.

Participants were invited from different cities in the state of North Rhine-Westphalia.

Anja and Sergio Brina of UPF, who have organized regular Monday events in Düsseldorf over the past several years, welcomed the participants and skillfully moderated the program. Christina Partuschke of the Bonn chapter of UPF introduced the speaker.

After studying political economy, Dr. Joachim F. Reuter did research at the Technical University in Berlin and the University of Mainz, worked in heavy industry, was the chief financial officer of an engineering enterprise, and a member of supervisory and leadership committees in the field of economy and unions. His great interest in ethics and values increased after he recovered from a serious and seemingly incurable illness. Since that time he has pursued ethics and values in many positions (especially in Rotary International). This is attested to by his many lectures and publications. He is especially interested in quantum physics and the conflict between natural science and religion.

Dr. Reuter started his presentation with an overview of the most important stages in the life of Stephen Hawking, who was born in 1942 in Oxford and who, already while he was at school, was given a full scholarship for physics, chemistry and mathematics at Oxford University. Like Albert Einstein, he had an IQ of 160. In 1963 a diagnosis of amyotrophic lateral sclerosis (ALS) saw the beginning of a long and suffering course. Nevertheless at the age of 24, he gained his doctorate and was given the renowned chair as Lucasian professor of mathematics at Cambridge University.

To his legacy belong his theory of the melting of black holes, the proof that black holes emit a weak radiation, and the M-theory, with 10 to the power of 500 equations, the only candidate for a complete theory of the universe, a universe that created itself – without a creator.

Dr. Reuter dealt with statements such as “Spontaneous creation is the reason why there is something and not simply nothing” and questions such as “What happened before the beginning?” “What was God doing before He created the world?” and “Were there natural laws before the creation?” as well as Hawking’s thesis that an afterlife is probably wishful thinking or that the probability of life emerging on the earth was slight.

Dr. Reuter pointed out that Hawking had not taken into full consideration developments in the field of quantum physics. Hans Peter Dürr published a very widely esteemed book, Physics and Transcendence (with contributions from Niels Bohr, Max Born, Albert Einstein, Werner Heisenberg, Pascual Jordan, Wolfgang Pauli, Max Planck, Carl Friedrich von Weizsäcker and others), in which these “seasoned physicists” deal with metaphysical findings. Dürr is of the opinion that Hawking represents a quantum theory that is reminiscent of the quantum mechanics of 1925. He stressed that a quantum field is able to learn; it does not function with the speed of light, but is instantaneous. Einstein spoke here about a “ghostly work from a distance.”

The speaker continued with further points such as: the relationship (spiritual connection) between observer and subject, that observation causes reality, superposition and parallel worlds, instant teleportation and the phenomenon of indeterminacy, global relationships of everything with everything (quantum net, quantum foam, morphic nets), the separation of physics and spirit/soul, the end of the demand for falsification (evidence instead of proof) and the new challenges of the courage to recognize truths.

Dr. Reuter drew attention to his writings on the topic and offered to send on request to the participants, free of charge, Alice and Bob: Quantum Physics and Belief, First Talk.

His presentation was followed by a lively question-and-answer session.

Anja Brina closed the session by announcing a further webinar with Dr. Joachim F. Reuter, planned for August 22, 2020, on the topic: “Contemplation and Meditation – Self-Suggestion and Illusion?”

(Translated from German by Catriona Valenta.)