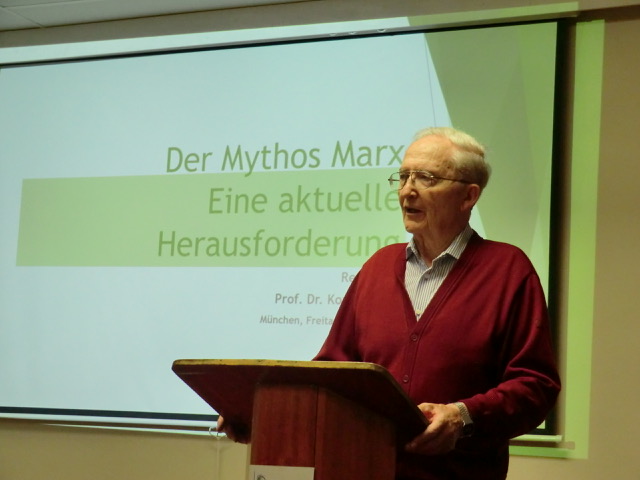 Munich, Germany—A recognized expert on Karl Marx and his teachings asked a Munich audience whether a renaissance of Marxism would be desirable.

In recognition of the 200th birthday of the German philosopher and economist, UPF-Munich invited Professor Emeritus Dr. Konrad Löw to give a lecture titled “The Myth of Marx—a Current Challenge” at the UPF offices on May 4, 2018.

Karl Marx’s bicentennial has been celebrated by many, not only in his birthplace, the city of Trier, but all over Germany.

In his presentation, Professor Löw, a lawyer and political scientist who has published several books on Marx, powerfully and decisively debunked the man and his persistent myth.

Based on his thorough study into the sources of Marx, his publications and his work, Professor Löw showed very clearly that in many respects Marx may be called the father of violent revolution. He also emphasized that no Christian can be a Marxist.

The ill-fated ideology of Marxism has brought a great deal of suffering and discontent to the world, he said, and a renaissance of Marxism—Neo-Marxism—would not be desirable.

After the presentation, a lively exchange developed among the participants, and Professor Löw addressed many questions.