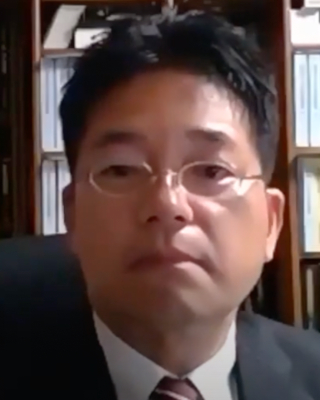 Then, what is Juche ideology? First of all, like existing communism, it is based on atheism, and its essence lies in humanism. The Juche ideology says that human beings have 2 types of lives. One is physical life and the other is sociopolitical life. There are three attributes of this sociopolitical life: autonomy, creativity, and consciousness. Of these, autonomy is said to be the most precious.

By the way, although human physical life is limited, it seems sociopolitical life can become of eternal value by enhancing this autonomy. It is explained that this can only be achieved through organizational and ideological cohesion with the leader (Kim Il Sung).

In the Juche ideology as well, it is impossible for human beings to obtain eternal life by individual effort, and that only by integrating with Kim Il Sung ideologically is it possible to obtain eternal political life. Therefore, we can say that there is a structural similarity between the two by replacing Kim Il Sung, the leader of the Juche ideology, with Jesus Christ.

So how did Kim Il Sung create this ideology? The answer to this might be found in his family background and education. Kim Il-sung's father, Kim Hyong-jik, seems to have been from the peasant class, but he attended Soongshil Middle School, a Christian school. And the father of his mother, Kang Ban-seok, was a Christian minister. Normally, no parent would name their beloved daughter "Banseok (stone tablet)," but it is thought that they named her "Banseok," wishing for her unwavering faith in Christ. Therefore, it is thought that Kim Il Sung was born and raised in a Christian family.

Furthermore, as Kim Il Sung grew up, his maternal grandfather, Kang Don-wook, had great influence on him. He was the principal of Changdeok School, a 5-year school established Pyongyang by Protestants from North America, and this is where Kim Il-sung studied. From these points, it is believed that Kim Il-sung acquired a Christian background from a young age, and this is considered to be the origin of the Juche ideology.

Communism denies the existence of God and Christianity and emerged from opposition to this. It is interesting that the Juche ideology is a kind of recreation of the communist ideology with Christian salvation theory.

By the way, if you look at the traditional ideologies of Korea, there is something structurally similar to Juche ideology. For example, after the middle of the Joseon Dynasty (late 15th to mid-17th centuries), there was a prophecy called "Jeonggamnok." This was the time when the dynasty was facing a crisis due to the Bunroku-Keicho War with Japan (called the Imjin War in Korea).

The Jeonggamnok faith is a folk belief that after the fall of the Joseon Dynasty, the “True Man,” or savior, will appear from the Jeong clan to build an ideal kingdom and save the people. It can be said that this ideology strongly reflects the messianic element of Christianity, that in the history of hardships, human power alone is not enough to be saved. Therefore, the “True Man" of the Jeonggamnok can be replaced by Kim Il Sung, the leader of the Juche ideology, and we can say there is a structural similarity between the two.

Now, North Korea's regime is based on the Juche ideology. It is characterized by the fact that North Korea is a trinity of Kim Il Sung, the Korean Workers' Party and the people.

To this end, the “Principles for the Establishment of a Monolithic Ideological System” was established, and they must be thoroughly implemented.

When we look at these principles:

The people who are loyal to Kim Il Sung and become a trinity gain eternal political life, and the nation supported by such people will not perish. This is what North Korea calls a "socio-political life state." It can be said that North Korea is a religious nation.

Finally, the question is how the regime based on the Juche ideology is maintained. This is largely due to the "education" of the people. Around 1988, when the socialist countries of Eastern Europe began to collapse, North Korea's kindergarten was based on a system in which children lived in the kindergarten for during the week and returned home on Sundays. At the kindergarten, they teach that Kim Il Sung is a great father who gave his people political life. The children of those days are now around 40 years old, and they are supporting North Korea today. It is no exaggeration to say that the North Korean regime is not maintained through force but through education. This why North Korea does not collapse easily.