Intervention of H.E. F.W. de Klerk at the 5th Rally of Hope 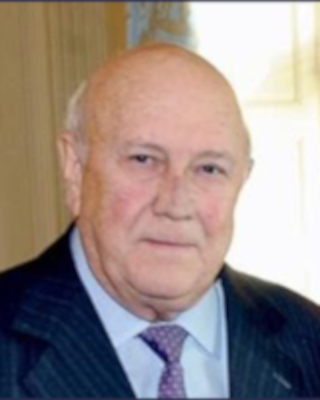 I would like to congratulate our host, Dr Moon, the co-founder of the Universal Peace Foundation, for her initiative in organizing the Rally of Hope virtual series. At this time of the global COVID pandemic, of unprecedented economic crisis, of changing power relationships and impending climate change, the world now needs hope more than ever before.

When confronted by crises we must make historic choices: we can be fatalistic and allow ourselves to be swept willy-nilly along by the current of events; we can resist and try to paddle against the tumultuous stream of history; or, guided by hope, we can search for a course between the jagged rocks and rapids – and steer our way toward the broad and tranquil river of peace, justice, and prosperity.

35 years ago, the situation that confronted us in South Africa appeared to be hopeless. We were increasingly isolated – without friends or allies in the world; our armed forces were involved in escalating warfare on our borders against Soviet and Cuban-led forces. We had to deal with widespread unrest, protests, and lawlessness in many parts of the country. Some of those in leadership positions opted for resistance: they were deeply concerned about the future freedom of our minorities under a majority government; they were understandably worried about the dominant influence of the Communist Party on the ANC – the main resistance movement; and they were discouraged by the failure of post-independence governments elsewhere in Africa to sustain prosperous, uncorrupt democracies.

However, some of us were motivated by hope. We hoped that if we judged the political currents correctly, we would be able to steer a course to a better future. I believe that fortune favors those who hope.

Toward the end of the 1980s, circumstances began to assist those of us who dared to hope. By 1987, the ANC, led by Nelson Mandela from his prison cell in Cape Town, began to accept that there would have to be negotiations. In 1988, our strategic concerns were addressed by the withdrawal of 50,000 Cuban troops from southern Africa. In November 1989, the fall of the Berlin Wall allayed our fears regarding the influence of the Communist Party within the ANC Alliance. Suddenly, there was reason for hope.

I realized that the chances for successful negotiations for a new, inclusive, constitution for all South Africans would never again be so good. So, on 2 February 1990, guided by hope, faith, and our conviction of the rightness of our decision, I steered a course toward the rapids of change. The rest is history.

After almost four years of tumultuous progress and after extricating ourselves from whirlpools of escalating communal violence, we finally made it to our first fully inclusive elections on 27 April 1994; to the inauguration of President Mandela and to the adoption of a truly inclusive and democratic constitution. Now, almost 27 years later, we continue our voyage down the river of history.

We have made good progress since 1994, but now, once again, the waters are becoming turbulent and we can hear the roar of rapids ahead. However, we have learned from our past: We have learned that we cannot resist the flow of history. We have learned that we should not simply allow ourselves to be swept away by the current. But above all, we have learned the importance of never losing hope. Like those sailors who rounded the Cape of Good Hope five hundred years ago, we know that we have the ability to avoid the perils that confront us and to chart a course toward a better future.