Address by Rt. Hon. Date Chuichi to the rally of hope on 9 August 2020 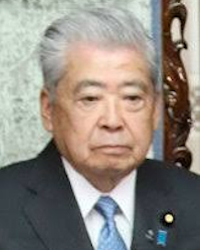 It is a great honor for me to be invited to the “Special Gathering of Experts in Hokkaido” organized by the Association of Ambassadors for Peace.

My name is Date Chuichi, and I served as President of the House of Councilors until August last year.

I must say that this conference, held under the theme, "The Current Situation and Future Issues of Covid-19," is a very timely one.

Today, I am happy to have Mr. Masayoshi Kajikuri, President of UPF-Japan, and Rev. Eiji Tokuno, President of Family Federation for World Peace and Unification, here with us today in Sapporo.

Invited by these two presidents, I participated in the World Summit 2020 which took place in Korea this past February.

To my honor, I gave my remarks on behalf of Japan in front of leaders of various walks of life, including heads of state and top government officials from all over the world, while Dr. Hak Ja Han was present on the stage.

Even thinking about it now I can feel the great sensation I experienced then.

At that time, Covid-19 had already started to loom on Asian countries, and when I see that they were able to successfully gather dignitaries from all over the world and hold this grand international conference of 6,000 participants despite this very difficult situation, I cannot help but feel that God is with this movement and He protected it.

Dr. Hak Ja Han said in her keynote address, "Human-centered selfishness has exhausted not only human beings but also the beautiful earth. It is not possible for humanity to become one with thoughts and ideas centered on humans. We must properly understand God, the Creator, who is the origin of the universe.” I still keep those words in mind. I was deeply impressed by the sight of Dr. Han expressing her beliefs with dignity in front of the head-of-state class dignitaries from around the world.

As soon as the summit ended, the whole world was swallowed up by the fear of Covid-19. Fortunately, Japan, South Korea, and other Asian countries have not suffered such great damage, but we are in a situation where we cannot put down our guard against the second and third waves that may come.

It is in times like these when the “International Summit Council for Peace” which was launched by Dr. Han during the summit needs to fulfill its role.

I heard that on July 19th, head of state class leaders who support the “International Summit Council for Peace” will hold an international conference to overcome the current crisis, by connecting the whole world online.

This is also very timely and meaningful.

The world is now divided by the disaster of Covid-19, and it faces difficult situations such as countries blaming each other and competing for masks and medical resources.

There has never been a time such as now when the spirit of "interdependence, mutual prosperity, universally shared values," which is taught by Rev. Moon and Dr. Han, was desperately needed.

The Japanese translation of Dr. Han's autobiography, "Mother of Peace, And God Shall Wipe Away All Tears from Their Eyes" was published this past March.

Many Japanese politicians, scholars, and leaders in religion and business are providing reviews that show they were deeply touched after having read it.

If you compare the conflict between the countries of the world to a fight between siblings, what the world needs now is someone who can be like a mother to all humanity who reconciles the siblings.

I sincerely hope that under the guidance of Dr. Hak Ja Han, the activities of the “International Summit Council for Peace” show the way to solve the various problems that the world is facing, taking a strong step toward world peace.

On behalf of the participants and leaders from Japan, I wish for the success of the event in Korea on July 19.