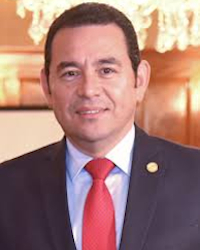 Receive a warm greeting from Guatemala. I thank the UPF and its Founder, the Honorable Mother Moon for her kind invitation to participate in this International Summit Council for Peace and Rally of Hope.

I want to tell you a true story: There was a deadly disease that hit people, experts say it started in the East, and then spread throughout the world. There was panic in the streets and governments did not know what to do, so they began to cancel events, suspend activities and close cities. The economy collapsed and people realized the fragility of humanity.

How familiar does this story sound to you? This happened 1800 years ago during the Antonine Plague or Smallpox, which hit the Roman Empire in the 2nd century of the common era. This means that it is not the first time that humanity has faced diseases like COVID-19.

One question, if I asked you, what do you want the dawn of the day after the pandemic to be like? What would you answer me?

While you think about it we will review history. In the 2nd century, humanity was hit by smallpox.

At that time the Roman Empire had two Emperors, Marco Aurelio and Lucius Verus, the latter died from the plague, so Marcus Aurelius had to rule only from that moment on.

Rome had just won a major battle against the Parthians, but that victory turned into a terrible tragedy as the smallpox was brought by the legionaries, killing one third of the Empire's population.

But, what did the rulers and the citizens of those times do overcome victoriously these terrible evils?

First, it is said that the isolation in their healthy houses and cities worked, but they realized that it was a temporary solution, because economic activity had to continue, so they arranged that people could travel to other cities with the condition of waiting 40 isolated days before entering a city to carry out activities, and that is precisely where the term "quarantine" comes from.

The second thing they did, they called the best professionals. Emperor Marco Aurelio, for example, called Galen the best doctor of the time, to lead the fight against smallpox.

The third thing they did, for example, Marcus Aurelius redirected the budget of the Empire. History shows that at that time Rome did not build civil works and the budget was allocated to help the most vulnerable. Marcus Aurelius did not increase the government debt, on the contrary, he decided to auction assets of the empire, including personal assets to assist and help those most in need.

One question, how long will the quarantine last? And after quarantine, will the virus have disappeared? Obviously not. Then we better appeal to people´s intelligence so that they keep the measures of coexistence and thus preserve their life and health, because as dangerous as a disease is, it is not running away from it that it will disappear. Emperor Lucius Verus fled from Aquileia during the Smallpox Plague, but died anyway because the disease reached him.

A couple comes to my mind asking themselves two simple questions: How long will you stay with me? Do I prepare coffee or do I prepare my life?

Human Smallpox that plagued humanity in the Second Century was not eradicated until the 20th century. So we may have the coronavirus for a long time and we must attack it yes, but also, we must learn to live with it.

In order to reach conclusions, I will quote Marcus Aurelius one last time: he said, “Adapt yourself to the things among which your lot has been cast and love sincerely the fellow creatures with whom destiny has ordained that you shall live.”

First conclusion: This "lucky" generation had to face the Covid-19, with all the scientific and technological advances that humanity had never had before. Then, let's adapt ourselves to living with the physical distance; to improve our hygiene; let's take advantage of technology to inform and stimulate the intelligent coexistence of our people; and, let's show our "true love" to others, with solidarity, fairness, equality and justice for all.

Second conclusion: We cannot ask everyone to stay locked in their houses because the State will not be able to subsidize food and sustenance to the entire population in a sustained way, much less continuously, if there is no one to produce and pay taxes. People will not be able to subsist. They will have to go out to work and produce, keeping the relevant measures. AND...

Third: There is encouraging news of a vaccine, which is why all governments and world leadership must advocate that it be free for all people, and that, in the case of pandemics, vaccine manufacturers put solidarity towards humanity before profit, and that the States bear the cost of medicines for their citizens, aiming at the preservation of life.

Now, I tell you how I would like the dawn of the "Day after" this Pandemic:

I would like a blue sky with a radiant sun that illuminates the whole of humanity giving hope of life to children, young people and the elderly, and that together hand in hand we walk on a path of health, prosperity and love.

The question arises: What will you and I do so that the day after, is a day full of hope?

To conclude, I want us to acknowledge the effort of Mother Moon who, with her leadership promotes peace, family and integration of the world, with the message of a united family, based on love and fidelity. It is meritorious to recognize that in this difficult time of pandemic, when everything has stopped, Mother Moon is leading this International Summit and Rally for Peace for development, prosperity and interdependence with the flag of a family under the blessing of God.

It is also my wish that in this year 2020, in which the 70th anniversary of the beginning of the Korean War is commemorated, this Summit and Rally will inspire the Korean people to raise the flag of reunification and allow the reunion of the 10 million separated families. The reunification of Korea would undoubtedly be the beginning of the restoration of peace in North Asia and a good model for the reestablishment of world peace.