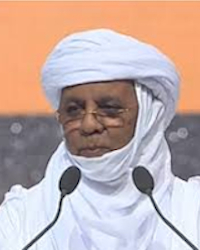 Your Excellency Macky Sall, President of the Republic of Senegal;

Your Excellency Evaristo Carvalho, President of the Democratic Republic of Sao Tome and Principe;

Excellencies, Heads of State and Government of Various Regions of the World;

Your Excellency Madame Saynab Abdi Moallim, First Lady of the Republic of Somalia;

Ladies and Gentlemen, the international leaders of the Universal Peace Federation,

Ladies and Gentlemen Participants in the Rally of Hope;

It is with great pleasure that I am participating in this global assembly of hope on the theme "Rebuilding and renewing our nations in the post-Covid 19 world: Interdependence, Mutual Prosperity and Universal Values"

On behalf of His Excellency, Mr. ISSOUFOU MAHAMADOU, President of the Republic of Niger, I welcome the participation of his brothers and friends, Heads of State of Senegal and of the Democratic Republic of São Tomé e Príncipe, His Excellency Macky Sall and his Excellency Evaristo Carvalho, whom I have addressed, as well as all the Heads of State and Government of other Regions of the World who have graced this occasion, the Rally of Hope, with their presence.

I also welcome the participation of all these eminent dignitaries representing various fields, who work for social justice every day with determination and conviction, for the sake of lasting peace, without which no development is possible.

I take this opportunity to thank the Founder of the Universal Peace Federation, Doctor Hak Ja Han Moon, the Mother of Peace, for this joyful initiative entitled the Rally of Hope, which allows participants to convey messages of peace and a new moral, ethical and spiritual, economic and cultural vision.

This fight is the one led by the Universal Peace Federation. It is the fight for a more just world, a more human world, a world of [greater] tolerance and a more peace-loving way of doing things. Indeed, the Founders of UPF consider that it is important today to recognize that living for the sake of others and for the public interest is the basis of development in an interdependent world.

Mother Moon, as you so aptly pointed out in the context of this rally, the COVID-19 crisis has created disruption around the world. These disruptions have not only impacted the lives of those infected, their families and loved ones, and of the healthcare workers, but also have affected children whose schools have long been closed, workers who have lost their jobs and companies that have been forced into bankruptcy.

The Covid-19 crisis has had significant impacts on the geopolitical balance of power as well as on the global economy. It affects all sectors: religion, government, universities, education, business and the economy, families, women and young people, the media and the environment.

Thus, on the level of the Economic Community of West African States (ECOWAS) for example, the economic growth rate initially forecast to be 3.3% in 2020 will in fact be less than 2.1% if the pandemic persists until the end of the year, leading notably to a fall in tax revenues and an increase in unemployment and poverty. Some countries, in particular those of the Sahel and the Lake Chad basin, are experiencing a triple crisis: health, security and the economy.

This means that Africa must confront not only the pandemic but also the need to revive its economy. This fight on two fronts requires an exceptional mobilization of financial resources. Already, before the pandemic, Africa needed 600 billion dollars per year to achieve the Sustainable Development Goals, and those of Agenda 2063, in particular the objectives of its first ten-year plan 2013-2023, among which the structuring (giving structure) projects related to the African Continental Free Trade Area, infrastructure, industry and agriculture. These two agendas constitute the great vision around which all our energies remain mobilized. A decisive step in the implementation of these agendas was taken with the launch, in July 2019 in Niamey, of the African Continental Free Trade Area (AfCFTA). For success to be sustainable, however, and for other projects to be implemented, it is necessary not only to guarantee funding but also to guarantee stability, peace and security.

This is the place to renew Niger's sincere thanks to all international donors and in particular to the Mother of Peace, Mother Moon, for her financial support for the operational phase of AfCFTA and for the implementation of the Heavenly Africa Project / Project for a Blessed Africa (chose).

The scale of the economic crisis that our countries will experience, it must be emphasized, requires financial support that goes beyond a simple debt moratorium. Our countries must be completely deleveraged, and in addition, provide them with fresh resources. Since deleveraging through inflation, a process used by rich countries to get rid of their debts in the aftermath of the Second World War, is not an option, debt cancellation must be carried out despite the inequalities it will generate among beneficiary countries.

For now, Africa is the least developed continent in the world, particularly south of the Sahara.

Its population is estimated today at 1.2 billion souls and could reach 2.5 billion by 2050. It is characterized by its youth, hence an enormous potential of labor and consumers. The demographic transition underway on the continent will provide a highly productive working population with a strong capacity to save, provided, of course, that young people are trained and educated.

When it comes to interfaith dialogue and cooperation, I can confirm that there are universal values ​​that all people affirm beyond race, ethnicity, religion or ideology.

In my country of Niger, most of the population shares the Muslim faith, a religion whose holy book, the Koran, professes the brotherhood of all believers through verse 10 of Sura 49 which deserves to be studied in depth. and explained to all humankind. I quote, "The believers are but brothers, so make settlement between your brothers. And fear Allah that you may receive mercy." (good] End of Quote.

I think it is unnecessary for me to point out to you that we are talking about believers here, all believers! In my opinion this verse contains the entire universal dimension of Islam, the imperative of peace that it professes as well as its reaffirmation of the oneness of humanity.

The President of the Republic ISSOUFOU MAHAMADOU and his Government are calling on all Nigeriens for a Cultural Renaissance. It will apply this code of values to three areas of modernization: social, political and economic.

Thus, the modernization we want for Niger is the cohesion and stabilization of the family unit, cemented by solidarity that banishes laziness, idleness, begging and the welfare mentality (being dependent on others). The social modernization that we want for Niger is the detribalization of our society, it is the suppression, in accordance with our constitution, of social relations based on clanism, tribalism, regionalism and communitarianism.

Ultimately, the Cultural Renaissance aims to rebuild our country on a spiritual, moral, political and economic level! So this is a Herculean mission that we are tackling with conviction and determination.

I would like to bow to the memory of Reverend Sun Myung Moon, founder of the Federation for Universal Peace, salute the charismatic dynamism of Dr. Hak Ja Han Moon and pay deserved tribute to all the leaders of this organization.

We are committed to making our contribution to the work of the international community for peace and understanding among the peoples of the world.