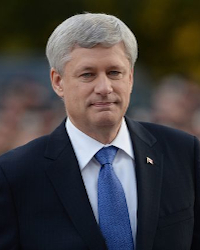 To Honorable high office holders past and present, to distinguished participants from around the world and of course to our host, the Universal Peace Federation.

Thank you for inviting me to join you once again.

For the past two years, I've been a guest at the World Peace Summit in Seoul, South Korea, and what an experience it has been. Perhaps nowhere else in the world is there such a gathering of experienced leaders from government, business, academia, and faith communities representing the wide array of global nations and making such a broad contribution to global thought on the challenges facing humanity. As all who have attended can attest, it's an experience without parallel.

My congratulations go to the Universal Peace Federation, to your chairman, Dr Thomas Walsh, to international president, Dr. Michael Jenkins and to your Canadian president, my friend, Dr. Franco Famularo, but especially to Dr. Hak Ja Han Moon. It is due to Doctor Moon's vision and inspiration that a global dialogue of this scale and of this quality is occurring at a time like this. And what an extraordinary time it is. The pandemic of 2020 is an experience that no one alive today will ever forget. It's an experience that for better or worse will leave a lasting and indelible mark upon humanity.

Many have compared it to the global financial crisis of 2008 and 2009. I was prime minister of Canada at that time, and there are aspects of this crisis that remind me of those times, but there are some very big differences. For one, this is a significantly more difficult crisis. It is both an economic crisis and a health crisis, and the solutions for one run counter to the solutions for the other. This is why contrary to much commentary, we can have no idea which countries are “getting it right” or which are “getting it wrong.” This is without precedent and we do not yet know the full outcomes on either front.

Another big difference from the global financial crisis is in the realm of international cooperation. In november 2008, shortly after the Global Financial Crisis began, I was part of a meeting at the White House convened by George W. Bush, the meeting of the world's biggest economies and its leading international financial institutions. It was in fact the first-ever meeting of the G20. In a couple of days work, we drafted the basis of an international plan to deal with the crisis. Much work remained to be done at the national level, but the outlines of a global response had taken shape. It involves significant international collaboration and avoided many potentially systemically damaging actions.

This time, there has been nothing resembling such international cooperation, and so we've seen a myriad of conflicting economic closures and travel restrictions, a completely unnecessary global oil supply war, fights over supplies of personal protective equipment, and now the competitive race for primacy and superiority in the development of a vaccine. I wish I could tell you that what we witnessed is an aberration, but I think the reality is that the reasons for this lack of cooperation run deep.

International institutions cannot function effectively without the cooperation and leadership of the world's strongest powers. Today there is not such leadership; the United States is not willing to provide it. This is not just about the current US administration, the American public is exasperated with its global leadership role, which has far too often left the United States with wildly disproportionate burdens and obligations for which the American public sees little commensurate benefit. China cannot fill the void for a different reason. It is not widely trusted. Then, when we look at its role in the early spread of the virus, how could it be? And for its part, the European Union remains focused on the internal divisions that have become ever more challenging in the decade since the global financial crisis. So, the lack of international cooperation today is all very explicable, but that does not mean that this state of affairs is not risky.

On the contrary, we're entering this phase of non-collaboration in the world at just the moment when global challenges will be particularly pressing and often do require global solutions. The pandemic is an obvious one, climate change is another. But I am talking in particular about the global economy. I've been saying three things since March. These were controversial back then, not so much now.

First, the scale of the economic downturn has been underestimated. Analysts have been revising their forecasts and now foresee a global GDP drop of at least 5%, which will be well in excess of the global financial crisis. Second, the speed of the economic recovery has been overestimated. There will be no v-shaped recovery. It will likely be two years before even the strongest economies return to their pre-covid levels. Third, the current level of economic and fiscal intervention by governments is unsustainable. These are already multiple times higher than during the global financial crisis. They point to widespread sovereign-debt pressures in the next few years, and the need for fiscal austerity at precisely the time when much of the public expects the opposite.

Watch for this. As the worst of the virus passes, which it will, and as the economic downturn lingers, which it will, the political solidarity experienced in many countries during the pandemic will turn to anger over the economy. Anyone in power today will face that anger, and their survival in that position, especially but not exclusively those seeking re-election, will be in severe jeopardy. We saw this after 2008, 2009. Few elected leaders survived that economic crisis and, as I say, this one will be worse in its impacts.

As we know, in such times there can be an inclination for leaders and nations to turn to easy but ultimately disastrous solutions, protectionism, socialism, and aggression in international affairs. That's why it's essential that we understand our interdependence in this world, work together to rebuild our mutual prosperity, and act on shared values, rather than zero sum strategies. It's indeed for precisely these objectives that the Universal Peace Federation Rally of Hope gathering is being broadcast. With that said, let me just add that it's important we pursue these objectives not simply with our hearts open, but also with our eyes open even wider.

For example, while we should resist protectionism, we can no longer pretend that countries that pursue purely export-driven growth strategies are free traders. We cannot continue to watch our existing jobs go to those countries, while our workers have little opportunity to sell their products and services into those markets. It's essential that countries that pursue such export-driven trade strategies be similarly treated.

Likewise, we cannot just pretend that international bodies like the World Health Organization are useful in advancing shared aspirations when they put the national politics of some above the international mandate they are supposed to be pursuing. They either must reform themselves or we must seek better avenues of cooperation outside of them.

And finally, we must recognize that history shows that the rights and freedoms of ordinary people are critical to creating and sustaining our prosperity and peace over time. In other words, we should not pretend that those states which deny freedom, democracy, human rights, and the rule of law share values with us. We should stand unequivocally for those values and with those who fight for them. As South Korea, Taiwan and many others in the world have shown, authoritarian rule is in no way necessary or desirable to successfully resist a pandemic.

Obviously, what I've laid out is a tall order to confront very serious challenges and, to do so through encouraging collective international efforts, while also being prepared to confront those who undermine our common good, but if there is any organization capable of convening a truly global network of people committed to genuinely shared efforts then it is this one, the Universal Peace Federation.

Thank you again for giving me your attention.

God bless you and your critical deliberations.