Address by Hon. Newt Gingrich to the rally of hope on 9 August 2020. 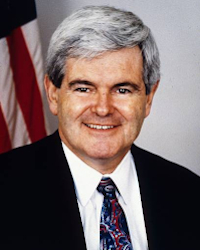 Well, first of all, I would like to welcome all of the distinguished Heads of State, parliamentarians, and leaders who have come together for this Rally of Hope. I think what you are doing, the time you are spending, your involvement is very important in a very troubled world. And I think that what Mother Moon has done in carrying on the work of her husband and building a worldwide movement committed to the concept that we can find ways to talk with each other, we can find ways to work together, and now we need to place more emphasis on peace and on seeking a better future than on war, and I think it's a very important thing that you're doing.

And so, this meeting is another step in the right direction. I participated in several and I know that the work that has been done by the Washington Times, really not just in America, but around the world is a key part of that. And that the influence the Washington Times has built in the United States in carrying this message of hope, and this message that together we can find steps in the right direction, bringing North Korea and South Korea closer together, finding a way for Korea and Japan to have a better way to dialogue. I can tell you in the meetings I have been in, in both Korea and Japan, it's been remarkable the number of people who have come out and who have been involved.

I can also tell you that Congressman Dan Burton who heads up the International Association of Parliamentarians for Peace is just doing a remarkable job. I have known Dan for many years. He is deeply committed, he is hardworking, he is courageous, he has great contacts in Washington, and now frankly, working through the Universal Peace Federation, he has great contacts around the world. And he really is committed to bringing people together.

So, I think this meeting that you are now engaged in is an important step frankly in a time when the world is very troubled. Between COVID, the economic difficulties, all the things we are seeing. We need more effort to follow the path of Rev. Moon, to recognize that seeking peace, seeking understanding, working together is the key to a successful future. And so, I think you taking your time to be involved in this meeting is really important.

I hope you have a very successful meeting; I hope to see a number of you later on this fall when we hope to have some meetings once we get past the epidemic and are able to once again get together in places like Washington DC. And I can tell you I would really look forward along with Dan Burton to helping a whole bunch of parliamentarians and government leaders to come together, to share ideas, and to develop a better path for the future.

So please allow me if somebody who is fascinated with this process, who has really enjoyed working with the Washington Times, in thinking through new ways to communicate with the American people and around the world, and who’s convinced that what Mother Moon is doing, in carrying on her husband's work, the work that together they launched is truly a historic mission and one that's worth your time and your effort; and I hope you'll tell your friends that there is hope for a better future.

You know, we are in a period of such extraordinary change. Having worldwide pandemic, which is affecting every single country in the world, having an economic crisis caused by the pandemic, which is affecting every country in the world. Watching various problems evolve and emerge in ways that could lead to a much more violent future, or with leadership, with people talking with each other, could lead to some really interesting breakthroughs and some real opportunities for cooperation.

So, when I look at what is going around in the world I think to myself this could be a beginning of a long decade or more, of difficulties, of feeling really psychologically let down, of depression, of despair, or, with the help of people like yourself, people who are willing to spend their time and their energy providing leadership, offering hope, we could come out of this cycle with a new burst of enthusiasm for a better future.

I am for one very big about space and the things that you are going to see that happen in the very near future; things, for example, the United Arab Emirates just launched their first rocket into space, the Chinese are launching a rocket that is going to go to Mars, we are developing a program to permanently go back to the Moon and we are inviting countries all over the world that will join us. Not that space will solve every single problem, but it does create a sense of hope, a sense of optimism.

If you look at the scale of research underway right now, I think at least three new vaccinations, vaccines coming online in a matter of months, the fastest ever in history, you can see that there is a pharmaceutical industry out there which may, by the way, be right at the edge of breakthrough, not just dealing with COVID-19, but also very close to a breakthrough on Sickle cell anemia, very close to a breakthrough on a number of other diseases. And so I can imagine a not very distant future where you have people more healthier, where the economy has come roaring back and you have people who want to get in equating prosperity, and where we have a much bigger vision of how the world fits in to a larger system and how we fit in to a better world.

So, I am an optimist. Yes, we have challenges. Yes, there are difficulties. But I believe that we can in fact work together -all of you are the example of this- we can reach across national boundaries, we can reach across parties and differences, and we can find a way to create a dramatically better future for our children and our grandchildren. And by doing it together, we actually create a better future for the entire human race. So count me in as an optimist, count me in as somebody who believes each one of us can make a big difference, and together, I think you are going to find that this meeting is one of the building blocks of creating that better future.