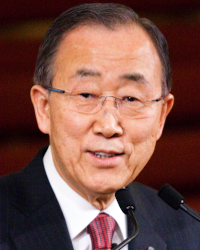 It is my great honor and privilege to share a few words with you on this historic occasion of the “Rally of Hope to Support the Heavenly Unified Korea through Interdependence, Mutual Prosperity and Universal Values.”

Furthermore, I would like to offer heartfelt words of gratitude to Dr. Hak Ja Han Moon for organizing this precious gathering. For the past seven years, Dr. Moon has devoted ceaseless efforts to bring together stakeholders from all realms of society to seek innovative ways to build a world of peace and to support peaceful reunification on the Korean Peninsula.

His sincere efforts to advance the cause of peace were crowned with success with the 2020 World Summit in February and have provided tremendous support for the Declaration of the Asia-Pacific Union.

Her sincere efforts aimed at furthering the cause of peace have led to successful hosting of the World Summit 2020 last February and have given much support for the Declaration at the Asia-Pacific Union. I believe this meaningful gathering will also serve as a platform that lays the foundation for Korea to turn itself into an innovative and inclusive nation as well as an economic peace community on the Korean peninsula, thereby being prepared for the next century

As you may already know, the world we are living in is continually facing challenges that threaten peace. Arrogance and material greed have led to territorial disputes, conflicts among religions and ethnic groups and family breakdowns. Worse yet, they aggravated the imminent threat of climate change and global warming. All this is seriously undermining human dignity. Rampant nationalism is threatening the security of humanity. I have witnessed this brutal reality firsthand, having lived through the Korean War, as well as during my time as diplomat and as Korea’s Minister of Foreign Affairs.

However, during my tenure as Secretary-General of the United Nations, the historic, unanimous adoption by 193 nations of the Paris Agreement during the 2015 UN Climate Change Conference (COP 21) became a tremendous turning point for environmental issues, particularly regarding greenhouse gas reduction. However, we are still faced with a particularly daunting set of challenges, all of which have become more pronounced by the COVID-19 pandemic.

COVID-19 has indeed become a grave threat to humanity. In the wake of this crisis, we have seen the intensification of unsettling trends. I will mention four of them, all of which are interrelated. First is the growing tension between the US and China, which some call a new Cold War. This trend has, and will have global implications, but nowhere more profoundly than here in Asia. Second, nationalism and protectionism are on the rise, resulting in countries to shift away from multilateralism and international cooperation. Third, there remains the imminent threat of climate change, undermining health and security of humanity on many fronts. If we fail to unite as one world community, our very existence will be threatened. Fourth, there is a crisis in values, ethics and social capital that underpin good governance and stable societies.

The new Cold War in the COVID-19 era, nationalism and protectionism, climate change and the crisis of social capital are the clear manifestations of nature’s stern warning to humanity. We need to heed this warning, and with foresight and empathy, seek for practical ways to coexist with nature.

Governments alone cannot address the challenges of our time, not to mention COVID-19. The role of NGOs is very important. If we are to achieve our goals, such as the SDGs, there should be a broad set of partnerships forged particularly between government and civil society. Building partnership across a wide range of sectors is imperative if we are to build a better world. In this respect, I highly applaud the work initiated by Dr. Hak Ja Han Moon for setting examples. I believe that the Universal Peace Federation and its broad set of partnerships in the realms of politics, religion, academia, media, economy, arts, women and youth serve as a good model. I believe the Universal Peace Federation will become a cornerstone to build lasting peace around the world and a Heavenly Unified Korea based on interdependence, mutual prosperity and universal values.

Peace is not an issue that is exclusive to one individual or a nation. Peace is our common wish and a long-cherished desire. I believe that lasting peace will only get stronger when governments and civil society closely partner with one another. Now is the time for us to build bridges, not to erect walls. If we work together, there is no challenge that is too great, no obstacle that cannot be overcome. Regardless of our national, ethnic, racial, religious or political backgrounds, we are the members of one human family. Let us respect and support one another to achieve world peace and move one step closer to peaceful reunification on the Korean Peninsula.

Once again, I would like to thank Dr. Hak Ja Han Moon for organizing today’s Rally of Hope to Support the Heavenly Unified Korea. May all of you and your family be filled with happiness and blessings. Thank you.