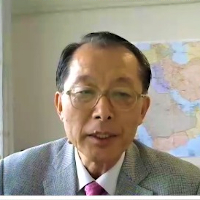 Good evening! I have lived in your region for over 25 of the last 45 years. So please allow this Japanese man to offer for just five minutes my personal observations relating to the Middle East.

When the Cold War was brought to an end some 30 years ago, human society could have opted for a third path. But the victors of the Cold War resorted to globalizing their free systems in economy, politics and society. Subsequently, while the world population generally enjoyed more freedom, prosperity and peace, this also opened a Pandora's box of “capitalism of greed” to maximize profits and interests.

Eventually the world went through three major financial crises originating in Asia, Europe and America. The free exchange of goods, money and people has to be heavily regulated. Income gaps have reached an unprecedented level. More ominously, the word “freedom” has tolerated anything, especially in moral, ethical lifestyles. Family values are no longer properly appreciated in international conventions. Is this correct?

In my observation, in applying much greater freedom, people have tended to ignore correspondingly greater responsibility. This was partly because the importance of religion was overlooked even after they won the Cold War, which had included an ideological and spiritual dimension of opposition to atheism and religious oppression. Interestingly, religion has since been revived in most of the former communist countries, including Russia.

Another mistake, in my view, has been a widening rift and friction between the West and the Islamic world. The struggle of the Muslim mujahideen in Afghanistan against the invading Red Army became a body blow to end the Soviet Union. Still, such a religious factor in fighting and winning was not properly appreciated. If they tried at least to understand it in more religion-friendly perspectives, the Middle East situations and the world outlook could have been much different from what we have witnessed in lamentation.

Since the 1960s, UPF's founders, Dr. and Mrs. Moon, have advocated a future vision of the human community based on interdependence, mutual prosperity and universal values. This vision is a social application of the more religious ideal of One Human Family under God. So, by putting these three values into practical policies and social behaviors, we will come closer, step by step, to a human community of peace, prosperity and freedom.

To sum up, all people are created to live in one grand family, substantiating the Creator's heart of mercy and love among brothers and sisters. Naturally, they share wealth in proper balance between the whole and individuals, allocating it as their conscience dictates, promoting prosperity for all. In one extended familial community, everyone shares a common heart and attention, striving for harmonious and constructive relations.

This system of thought played a very important role in the ideological struggle against communism in the 1970s and ’80s in Japan, South Korea, North and South America and Europe. The leaders of these countries openly appreciated its contribution in their national and global victory over communism.

When the ideological wall between East and West was being removed, Dr. Moon proposed a drive for universally shared values beyond national and religious barriers on the basis of this thought system. This global campaign is now carried on by the Universal Peace Federation.

Middle Eastern societies have many values and cultures in common with what is advocated in these Peace Values. For instance, interdependence is visible in their families and clans. A sense of collective ownership among community members is strong, compared with Western societies, including my own country, where individual rights and private ownership are the norm. In this part of the world, people largely adopt common ethical standards, while their society is more or less like an extended family. I believe these qualities are behind the increase of the Muslim population across the world in recent decades.

For humanity to realize these peace values, Dr. Moon proposed the following: "For the paths of religion, politics and economy to converge ... , a new expression of truth must emerge which can completely integrate religion and science. ... These will be the foundations for a new political order which can realize the ideal of creation … on the principles of interdependence, mutual prosperity and universally shared values." (p. 344, Exposition of the Divine Principle).

My engagement in the International Association of Academicians for Peace is one such attempt under the umbrella of UPF, associating scholars in 72 nations of Europe, the Middle East and Eurasia. You are most welcome to join in this endeavor to create a synergy between the holy and secular dimensions of our society. Thank you very much for your attention.