Intervention of Hon. Gadzhimurad Zairbekovich Omarov in the Peace Talks on 26-5-2020

Details
Written by Hon. Gadzhimurad Zairbekovich Omarov, Member of the State Duma of the Federal Assembly of the Russian Federation
26 May 2020 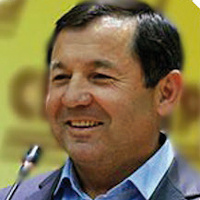 This year we celebrate the 75th anniversary of the end of World War II. Recalling those years, we realize that the total world losses, according to various estimates, amounted to 50 - 80 million deaths, taking into account both military and the civilian population. Several generations born after the Second World War, refer to that time, to learn and not make mistakes again.

Today, when humanity is facing new global challenges and threats, we must make full use of the invaluable experience of international cooperation and true alliance gained by our countries during the Second World War. Then, despite political differences and diametrically opposing views on current events, the leaders of the Soviet Union, Great Britain and the USA were able to correctly prioritize. The leaders of the Big Three managed to rise above personal ambitions and come to a mutual agreement on key issues, and develop common approaches to complex problems in the interests of ending the Second World War, establishing a global security system based on collective actions and the UN Charter.

Let me cite the words of the UN Secretary General, Antoniu Guterres: “The victory over fascism and tyranny in May 1945 marked the beginning of a new era. Awareness of special importance of international solidarity and our universal values ​​has led to creation of the United Nations, the main task of which is to rid future generations of the scourge of war. ”

Today we are faced with another world crisis, which has already claimed nearly 350 thousand lives around the world. Now the situation with the current crisis is often compared to the times of World War II. It is probably too early to think about establishment of a new world order, since this crisis, despite all the misfortunes it brought to humanity, is not so destructive to build a new order on the ruins of the old. However, in terms of the demand for self-sacrifice, mutual cooperation, and the ability to rise above personal ambitions and interests in order to overcome the crisis, these two periods are probably very similar.

Undoubtedly, after the pandemic, it is national governments and state institutions that will strengthen their positions. The focus will be on the economic sustainability and investment in medicine. In the international arena, in the face of the collapse of world processes, states will begin searching for a global mechanism to resolve crisis situations and eliminate common threats.

However, problems of a global scale, and in our time practically all of them are such, do not have national or even regional solutions. What is required under the current conditions is truly broad international cooperation, not burdened with ideological prejudices or historical resentments. This means the increased value of the basic norms of international law, the international order as such.

The need for international coordination is confirmed by the fact that, at present, such an international organization or an effective mechanism operating at the world level, unfortunately, does not exist.

In January of this year, President Putin proposed holding a meeting of heads of the states that are permanent members of the UN Security Council. I hope it will take place as planned in September this year, since the need for it is due to importance of being united in the face of chauvinism, racism, hatred, and other manifestations of this kind, and in the light of today's events, pandemics and global threats to human health.

Today, Russia is ready and eager to cooperate, and more than once the nation came to the aid of the countries that were most affected by the pandemic; and our country is grateful to those who extended a helping hand to Russia.

I think the Summit of the United Nations founding countries will demonstrate their common fidelity to the spirit of alliance, historical memory, the high ideals and values for which our ancestors fought shoulder to shoulder.

Another initiative of the Russian leader is to establish a special fund under the auspices of the IMF, funds to which will come from central banks of various countries, and all IMF members will be able to take loans at a zero rate for long periods. At the same time, President Putin emphasized that in this situation, it is necessary to provide funding to the countries most affected by the outbreak of COVID-19.

Disunity in the face of threats entails dire consequences. We must have the courage not only to declare this directly, but to do everything to protect and defend peace. The situation with the coronavirus pandemic highlighted serious problems in relations between the countries. Governments, trying to deal with the crisis, sometimes resorted to competition and conflict.

However, we also see that, with a few exceptions, people who, at the beginning of the crisis, found themselves in a stressful situation caused by the government’s decision to impose quarantine choose the path of peace and mutual assistance. The proof is a sense of unity among people, as well as kindness towards each other, which they demonstrate in Italy, in the UK, in Russia, and in other countries, while observing isolation regime. In different countries, we could observe the striking manifestations of altruism and sacrifice of doctors and nurses. In Russia, as in many other countries, volunteers lined up to help those who needed help.

Crises should help set aside disagreements and focus on the common cause of saving people. We see how international cooperation in the field of medicine has noticeably strengthened during the pandemic.

It is necessary to further expand this cooperation and mutual assistance, sharing information on treatment, best practices, and vaccine development in order to accelerate the results. For this, it is very important to establish exchange of information. One of the measures here is a policy of open research data and the possibilities of gaining access to it and using it in crisis situations. If earlier this issue was discussed at the country level in a rather passive mode, now research data in the field of medicine is being urgently mobilized, scientific collaborations are working to analyze data, including using artificial intelligence methods.

Cooperation between science and business in the pharmaceutical industry on creation of vaccines and apparatus for testing the disease, between universities and hospitals, is being strengthened in order to quickly collect new data on the characteristics of the course of diseases caused by COVID-19. Of great importance today are projects on international cooperation in the scientific, technical and innovative spheres, scientific consulting, and the use of open research data.

I think that today's pandemic teaches us how to show altruism and self-sacrifice not only among medical personnel, but also at all levels of government, including the parliaments of countries.

Russia supports the statement of the Inter-Parliamentary Union chair, Gabriela Cuevas Barron, in which she appealed to the UN Secretary General Antonio Guterres to declare a global truce - stop all wars and lift all sanctions that impede the supply of medicines and food to all countries that suffer from the coronavirus pandemic.

I believe that inter-parliamentary cooperation can play an important and positive role in developing understanding between countries, because it is the parliamentarians who represent the people who showed the highest human qualities when faced with a pandemic and isolation. Parliamentary contacts should help overcome the crisis of confidence between the states.

Strengthening interparliamentary cooperation is a difficult but feasible task facing us.

In conclusion, I want to thank all the participants in the discussion for the fact that with this webinar we are already showing our desire to understand each other and build more trusting relations.