Details
Written by Hon. Keith Best, Chair of the Wyndham Place Charlemagne Trust charity and of Charity 2020
26 May 2020 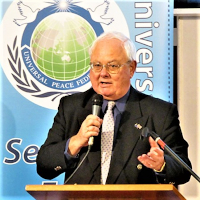 In times of global crisis whether of war, financial collapse or pandemic (as in all the best sci-fi movies and texts) the world usually comes together to find a common solution.

That is what happened 75 years ago with the creation of the UN and the Bretton Woods institutions, the latter at the financial level still operating reasonably effectively despite very changed circumstances. The political institutions, however, seem to be caught in a time-warp, such as the UN Security Council with its permanent five members holding the veto representing the victorious powers in 1945 (with the notable exception of the swap of Nationalist Chinese Taiwan for Beijing) and not the realpolitik of today. Consequently, other ad hoc groups have formed such as the G20 (originally founded in 1999 to promote international financial stability but now with a wider remit).

The 1960s and 70s saw an outpouring of a global sense of community, especially among the young (which I was in those days), perhaps in response to the Cold War and the threat of Mutually Assured Destruction as a minatory policy of survival, but also with world leaders such as Kennedy accepting and advocating that America could not solve global problems on its own. He echoed the wartime leaders’ call for uniting the nations and world government so that the bloodletting of two major conflagrations could never happen again. Global values were based on the Universal Declaration of Human Rights complementing the Geneva Conventions.

75 years has done little to dispel the mythology that surrounds the Second World War. Yes, it is true that Britain stood alone for a time until the American entry into the war following Pearl Harbour and the self-defeating declaration of war by Germany against the USA. The sacrifice of the Few and of British civilians in the cities ensured Allied supremacy in the skies but it is arguable that the West was saved by the disastrous decision for Hitler to invade Russia – certainly no student of the Napoleonic wars. I can understand why the massive loss of Soviet lives (although the purges accounted for more than did the Nazis) has built into Russian folklore that it was the result of Barbarossa (started in June 1941 before American involvement), Stalingrad and Kursk which turned the tide.

That sense of common global endeavour seems very different today. It was encapsulated recently by the respected financial journalist Jeremy Warner in The Telegraph “International co-operation is collapsing just at a time when it is needed most. Loss of trust in two of our most important multilateral institutions, the World Trade Organisation (WTO) and the World Health Organisation (WHO), is powerfully indicative of this “every man for himself” approach… Trumpite pique and aggressively pursued Chinese expansionism are in combination threatening to destroy a multilateral system that has delivered rapid growth in economies around the world and lifted hundreds of millions out of poverty.” US Ambassador Hill summed it up by stating that the US is reducing its influence by withdrawing from international institutions and is shooting itself in the foot – which makes it difficult to walk forward!

It is also a far cry from Churchill’s speech in Denmark in 1950 when he spoke of the four main pillars of the world temple of peace being America, with all its dependencies, Russia, the British Empire and Commonwealth and a United Europe and stated "The creation of an authoritative all-powerful world order is the ultimate aim towards which we must strive."

“Never let a good crisis go to waste” is probably a misquotation of Sir Winston Churchill but more certainly he did speak of a United States of Europe and global co-operation.

Much later than Churchill’s famous speech in Fulton Missouri, which he called Sinews of Peace, another leader in the same place, in May 1992, said “On today’s agenda is not just a union of democratic states, but also a democratically organized world community…   An awareness of the need for some kind of global government is gaining ground, one in which all members of the world community would take part.”— that was Mikhail Gorbachev.

The United Nations, beyond the Security Council (which has the ability to issue mandatory resolutions but, unlike during the Ebola epidemic, has failed this time to declare the current pandemic a threat to international peace and security), is limited to a mostly advisory role, and its stated purpose is to foster cooperation between existing national governments rather than exert authority over them. It can deploy peacekeeping forces (only with the agreement of the participating states) but where is the accountability apart from that to the General Assembly of states?

Gordon Brown has urged world leaders to create a temporary form of global government to tackle the twin medical and economic crises caused by the pandemic but this will not be the last and we know already of other threats such as to the environment though climate change which need global solutions. He referred to making the G20 a broader organisation, including the UN Security Council, because in the current circumstances you need to listen to the countries that are most affected, the countries that are making a difference and countries where there is the potential for a massive number of people to be affected.

I would add that any organ of global governance needs not only the sort of legitimacy give to the UN by the General Assembly of member states but also a democratic accountability through not just states but representatives of the people. We call that a Parliamentary Assembly which could be created now under Art.22 of the Charter and could be based on the model of the original European Coal & Steel Community (which, of course, developed into the current directly elected European Parliament) – it would be ideally placed to act as a scrutiny, in perhaps a series of Select Committees, to the different organs of the UN.

If we are not to allow this crisis to go to waste we must engender in world leaders and the population as a whole that sense of globalism which makes us all our brothers’ and sisters’ keepers wherever they are, that it is in national as well as humanitarian interests. We must enable our international institutions, through evolution rather than revolution, to break free from the straight-jacket of 75 years ago and to reflect the modern world. We must engage and remove the capacity for misunderstanding and consequent devastating error which characterises modern diplomacy.

In conclusion, rather than a disastrous trade war, the emasculation of WTO and a war between oil-producing states we should be embracing in a conference of ideas the second global economic power of China and the engagement of Russia – the first is a totalitarian state and reflects more common than individual rights so there is a large gulf between them and the West, the second has an understandable sense of paranoia about the loss of its hegemony over Warsaw Pact states, that then joined NATO and the EU, and the Commonwealth of Independent States as well as a sense of lack of appreciation and loss of pride at not being recognised as a world power. Yet their interests in an accommodation with the West is as great as the reciprocation. That should start with a discussion of how we can make the UN and its agencies such as WHO more effective to deal with global threats and more accountable.