Intervention of Hon. Erna Hennicot-Schoepges in the Peace Talks on 26-5-2020

Details
Written by Hon. Erna Hennicot-Schoepges, Former President of the Parliament of Luxembourg and Co-chair of IAPP Europe
26 May 2020 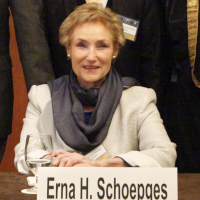 My experience as a Member of Parliamentarians for peace has given me the opportunity to learn a lot about the situation in Albania and in Morocco. Parliaments are the backbone of Democracy. However, I dare say that the role of Parliamentarians is sometimes too much subjugated to their parties. If they are in Government their criticism is not so well accepted, if they are not, well opposition is not a decision maker. In a crisis like the one we are living, decisions had to be taken without large parliamentary debates, according to the special status of emergency, accredited by the constitutions in Parliamentary democracies. Our debate is therefore also a debate about decision taking.

This year’s celebration of the end of WWII reminded my country of its beginnings:

On the 10th of May 1940, soldiers stepped in at the German border in Schengen and occupied Luxembourg for 5 years. This year, the borders to Germany were closed on the 9th of May by decision of the Federal Government, because of the virus. Policemen controlled all people coming in and going out, so it was a sad memory of the events damaging the whole of Europe 80 years ago.

The initiatives taken after WWII provided the member states of the EU with the longest period of peace they ever had. Robert Schuman gave his famous speech on the 9th of May 1950, creating the European Coal and Steel union, the CECA, forerunner of the EU, to initiate economic cooperation and to prevent rearmament in Germany. In May 1949, the Council of Europe was launched, NATO as well, and the Warsaw Pact began in 1955. The founding of the EU was about peacekeeping, whereas NATO and the Warsaw Pact were about defence. They did not prevent further militarisation and huge investments by their Member States in weapons.

A virus has hit and destabilized the whole world and its economy, a new weapon, to which none of the countries were prepared. This crisis should give rise to the question as to why we should continue to invest in the military, now, as this is not an answer to the virus. Where are the voices claiming for peacekeeping without weapons?

When decisions transgressing the borders of Nation States are to be taken, the EU is a very weak construction. During this crisis, each Nation State applied its own rules, as health policy is still national policy. But the virus made a mock of our borders! How were the Parliaments involved in the decision making concerning the virus? This is to be analysed.

UPF is preparing a resolution to address, notably, this point, by establishing a global network for cooperation and early warning within the legislative bodies. This is a very useful initiative and should be put into practice in cooperation with the World Health Organisation (WHO), which addressed its first warning in January.

The virus has shown the weakness of the political constructions in Democracies. What happened on the European Continent concerning the provision of healthcare materials, such as masks and tests, was the showdown of national egocentric behaviour. There was a tremendous lack of coordination and the poor financing of health institutions showed itself as a serious problem.

Parliamentarians have, in this respect, to call for for better health care systems in their countries, even beyond pandemics.

On the 11th of March, the virus was declared a Pandemic by the World Health Organisation (WHO). The reactions to it were slow and weak. Parliaments could have put more pressure on their governments to react earlier.

Solidarity between nations, this is really necessary for the EU. For Medical health care materials, like masks and tests, there were few stocks and no capacity in the EU for production, so they had to be imported mainly from other continents, facing difficulties with air transport and local restrictions. Each greater region should organise its own stocks of these materials.

Parliaments should be involved in the follow up of the research for medicines, as well as in the apps tracing the transmission of the disease. The scientific background is the only way to inform and educate the public. There were very simple and clear instructions concerning the virus and the dangers of becoming infected, but they were poorly communicated and replaced by many controversial messages. The scientists working since decades on this virus should to be trusted. Parliamentarians have to check the information and help by warning about unserious news.

This Pandemic needed quick and clear decisions for the sake of the health of the population.

I sincerely hope the after-virus will help our world to become really global, with resilience to each other and hope for combatting the deep diseases of society, such as poverty and lack of education. It should remind us of our fragility and teach us humility.