Vienna, Austria—The second Europe/Middle East “Peace Talk” was inspired by the 75th anniversary of the end of World War II.

The online event titled “Reflecting on 75 Years since World War II: Toward a Vision for Global Peace and Development Post-COVID-19” took place on May 26, 2020.

The panellists were (click on the links for the individual speeches):

Mr. Peter Haider, the secretary-general of UPF-Austria, hosted the webinar.

The concluding remarks were made by Mr. Jacques Marion, President, UPF Europe and the Middle East. 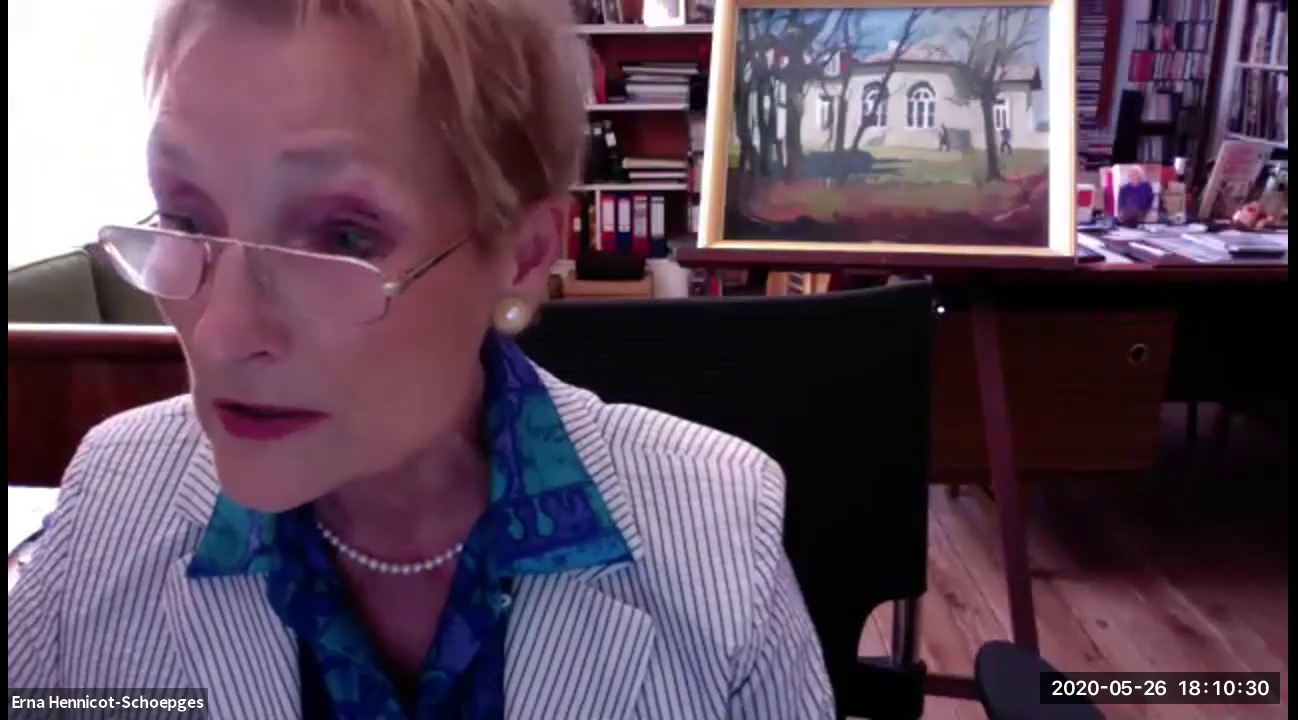 Hon. Erna Hennicot-Schoepges said that this year’s celebration of the end of World War II reminded her of May 10, 1940, when German soldiers invaded and occupied Luxembourg for five years. This year, the borders to Germany were closed on May 9 because of the coronavirus. It was a sad reminder of what happened 80 years ago.

The creation of the United Nations in 1945, the Council of Europe in 1949, and the European Coal and Steel Community in 1952, to prevent German rearmament, may be regarded as peace initiatives. The North Atlantic Treaty Organization (NATO) and the Warsaw Pact, established in 1949 and 1955 respectively, were defense organizations.

They did not prevent further militarization and huge investments in armament, however. Now that the coronavirus has destabilized the whole world and its economy, she said, investment in the military should be questioned, as this is not an answer to the pandemic. She asked where the voices claiming peacekeeping without weapons are?

The European Union has shown limitations in tackling this crisis, she said. Each EU member state has applied its own rules, as health policy is still a national policy. However, the virus has made a mockery of our borders, she said.

UPF is preparing a resolution to address this point, by establishing a global network for cooperation and early warning within the legislative bodies. This is a very useful initiative, she said, and should be put into practice in cooperation with the World Health Organization (WHO).

The virus has shown the weakness of political constructions in democracies, she said. The provision of healthcare materials, for instance, has demonstrated national egocentric behavior, a tremendous lack of coordination, as well as the poor financing of health organizations.

Parliamentarians should claim better healthcare systems in their countries, she said. Information extended to the public should be based on science. Fake news should be prevented.

Hon. Hennicot-Schoepges said she hopes the coronavirus will help our world to become really global and that we will not forget about the deep diseases of our society, such as poverty and lack of education. This crisis should remind us of our fragility and teach us humility. 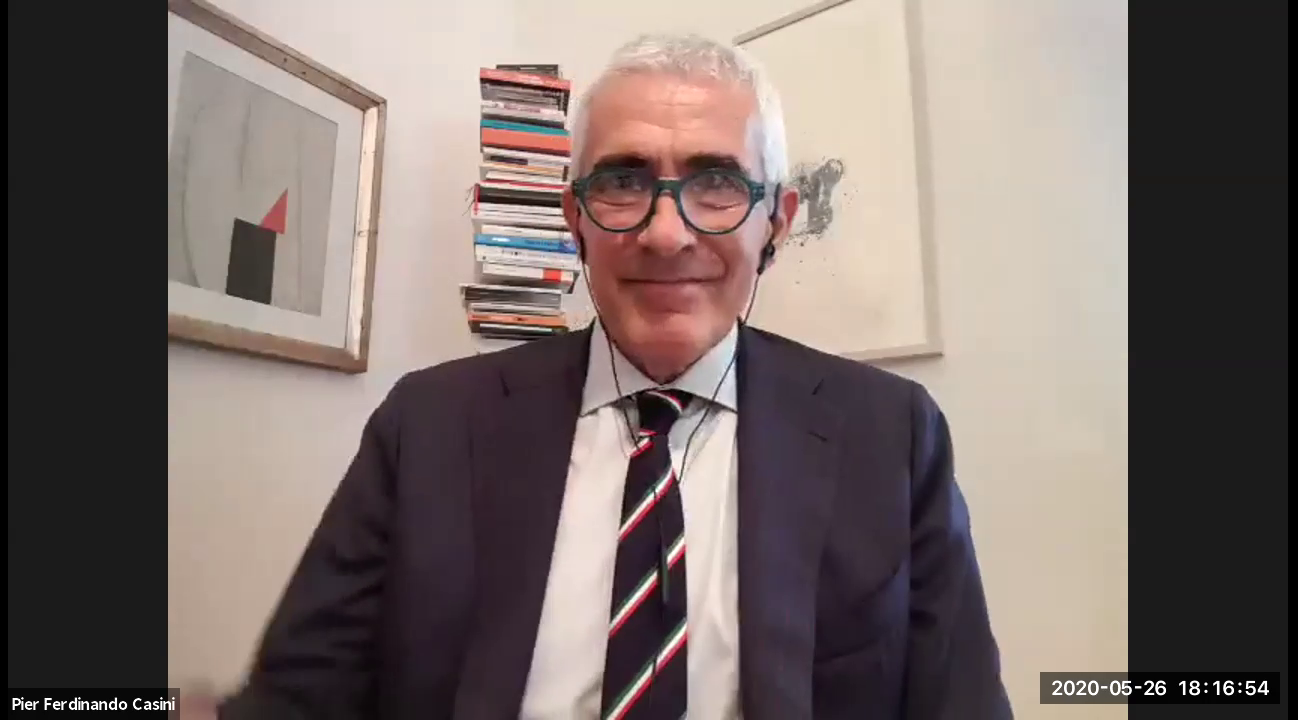 Hon. Pier Ferdinando Casini said that freedom, progress and democracy were ensured thanks to NATO and European integration. However, World War II also gave rise to the Cold War period, in which international relations were polarized even beyond Europe.

The collapse of the Berlin Wall in 1989 deluded us into thinking that the world would be without problems, he said. In reality, we have been faced with new challenges, such as international terrorism, migration, global warming, and financial crises.

Globalization has challenged the old balance of power, he said. Severe conflicts, instability, terrorism, poverty and social division are symptomatic of a multipolar rather than a multilateral world. And yet, the only possible approach consists of multilateralism, increasing interdependence and integration beyond national and even continental borders, as the COVID-19 crisis has shown.

Hon. Casini said that the weakness of international organizations has been revealed. The WHO should be a strong, independent and authoritative medical and scientific voice.

In recent years, and also in this crisis, nationalist forces have complained about a lack of solidarity in the European Union. Still, the European institutions did certain things, such as the financial support provided by the European Central Bank (ECB).

Hon. Casini said that the real challenge for the next few decades is to curb nationalist tendencies on both sides of the Atlantic. Prosperity will depend on global trade and the movement of people, he said. International institutions protect the people, especially in times of great difficulty. 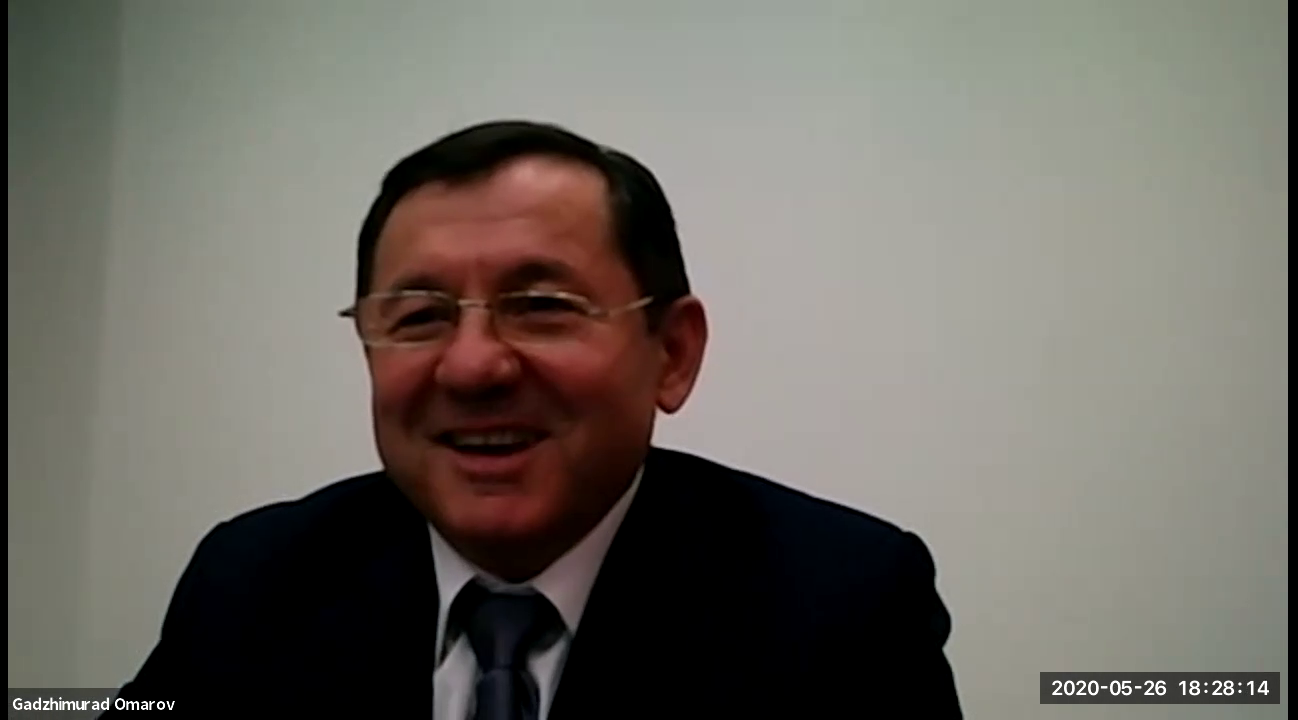 Hon. Gadzhimurad Zairbekovich Omarov said it is estimated that between 50 million and 80 million people lost their lives during World War II, almost half of whom were citizens of the former Soviet Union.

Today, when humanity is facing new global challenges, he said, we must remember the valuable experience of international cooperation shown in the alliance of the Soviet Union, the United States and the United Kingdom during World War II.

Today we are facing a world crisis that often is compared to the times of World War II. However, he said, it is too early to speak of the establishment of a new world order, since this crisis is not so destructive that a new order will need to be built on the ruins of the old.

The need for self-sacrifice and mutual cooperation to overcome this crisis is something these times have in common with the times of World War II, he said. Today most problems are on a global scale. They have no national or even regional solutions. International cooperation is needed, he said; there is no room for ideological prejudice or historical resentment.

Hon. Omarov said he believes that interparliamentary cooperation can boost understanding among countries, as parliaments represent the people, who have shown great altruism in this crisis. Governments ought to follow their example, he said.

God seeks to save all people without distinction, he said. Humanity is one family under God. Crises should help us to set aside disagreement, focusing instead on the common cause of saving people. 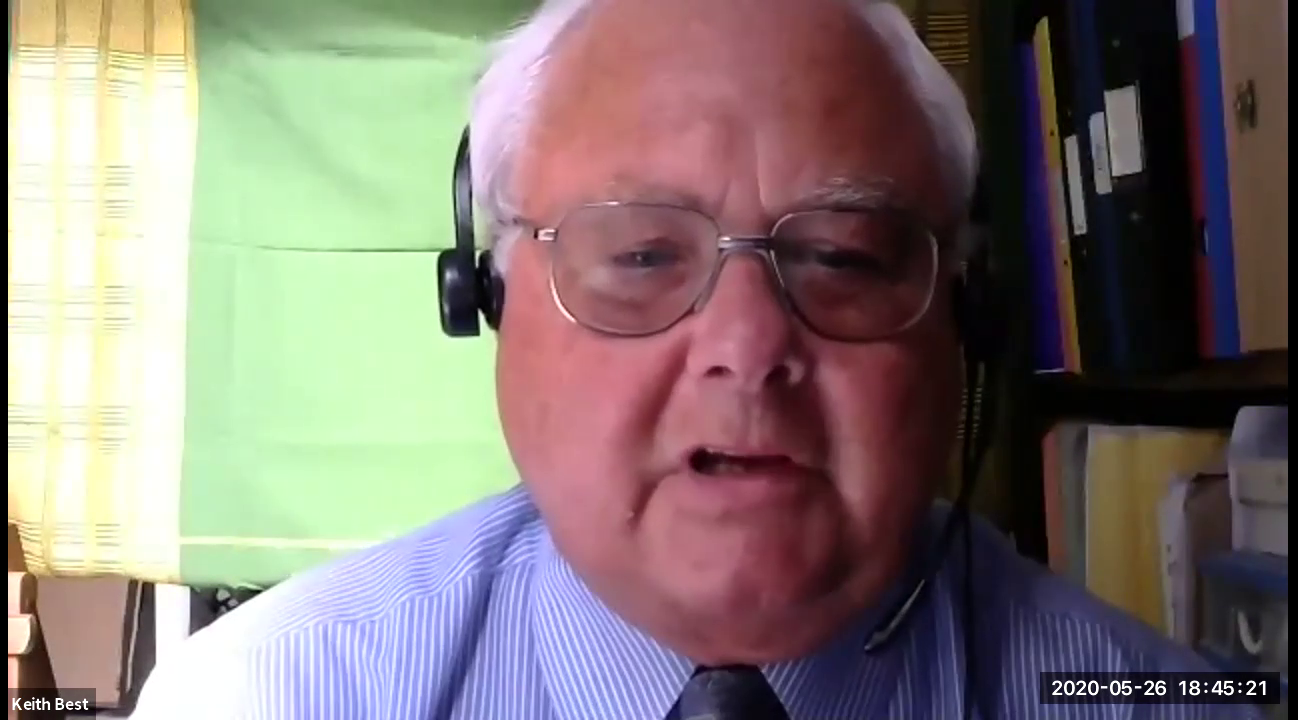 Hon. Keith Best, former Member of Parliament; Chair of the Board of Trustees, UPF-UK, United Kingdom

Hon. Keith Best said that in times of global crisis, the world usually comes together to find a common solution. This was the case after World War II. Today, however, political institutions seem to be caught in a time-warp, he said. For example, he said, the five permanent members of the UN Security Council that hold the veto represent the victorious powers in 1945 – and not the realpolitik of today.

The 1960s and ’70s saw a flourishing of a global sense of community, especially among the youth, perhaps in response to the Cold War and the nuclear threat. Global values were based on the Universal Declaration of Human Rights. World leaders, such as U.S. President John F. Kennedy, understood that nations could not solve global problems on their own.

Hon. Best quoted former Soviet leader Mikhail Gorbachev, who said in 1992: “On today’s agenda is not just a union of democratic states but also a democratically organized world community. … An awareness of the need for some kind of global government is gaining ground, in which all members of the world community would take part.”

That sense of common global endeavor seems very different today. International cooperation is deteriorating at a time when it is most needed, he said. Trust in the World Trade Organization (WTO) and World Health Organization (WHO) has declined.

Former British Prime Minister Gordon Brown has pleaded for the creation of a temporary form of global government to tackle the medical and economic crises. Hon. Best added that any organ of global government needs not only the kind of legitimacy given to the United Nations but also a democratic accountability through representatives of the people as well as through states. A parliamentary assembly could be created to scrutinize, in perhaps a series of select committees, the different organs of the UN. We must free our international institutions through evolution rather than revolution, he said.

Hon. Best said we should embrace both China, a totalitarian state, and Russia, which has an understandable sense of paranoia about the loss of its hegemony over former Warsaw Pact states. Cooperation between the West and these nations is of mutual interest.

After the individual presentations, Mr. Heiner Handschin, director and permanent representative of the UPF Office for UN Relations in Geneva, Switzerland, addressed questions from the audience to the panel. 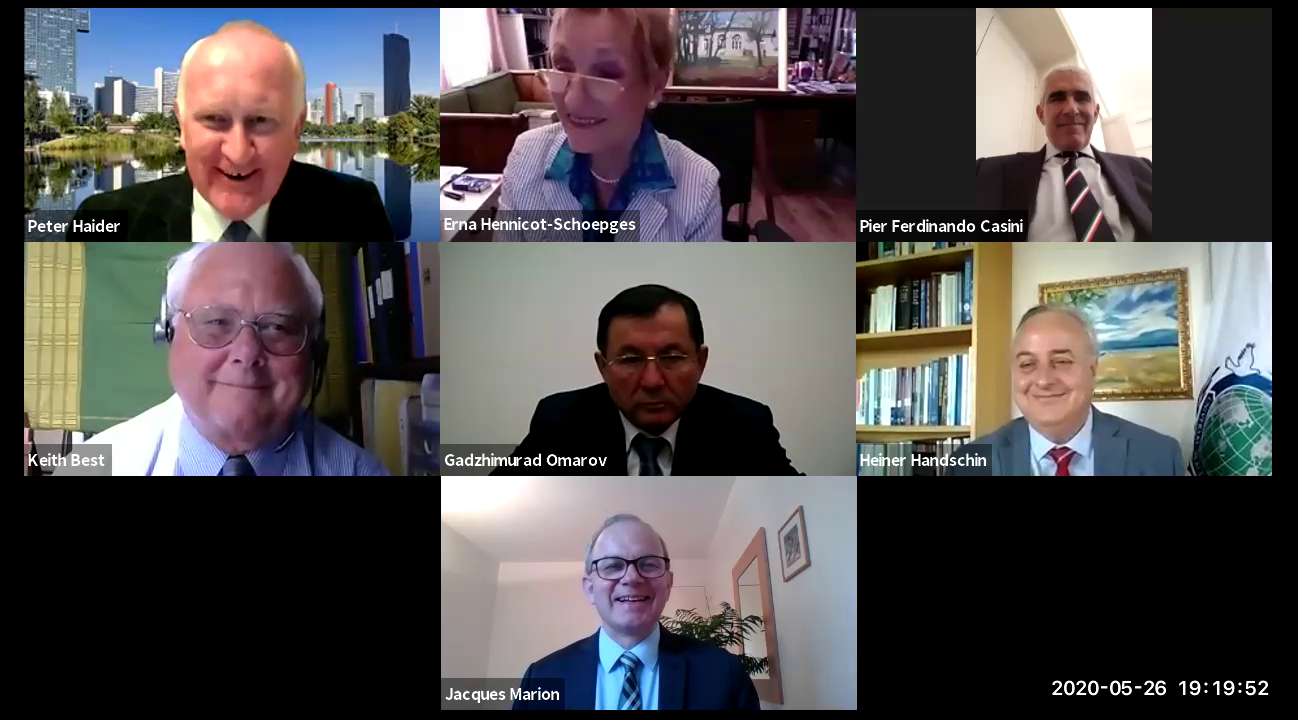 After the individual presentations, Mr. Heiner Handschin, Director and Permanent Representative, UPF Office for UN Relations, Geneva, Switzerland, addressed questions from the audience to the panel. 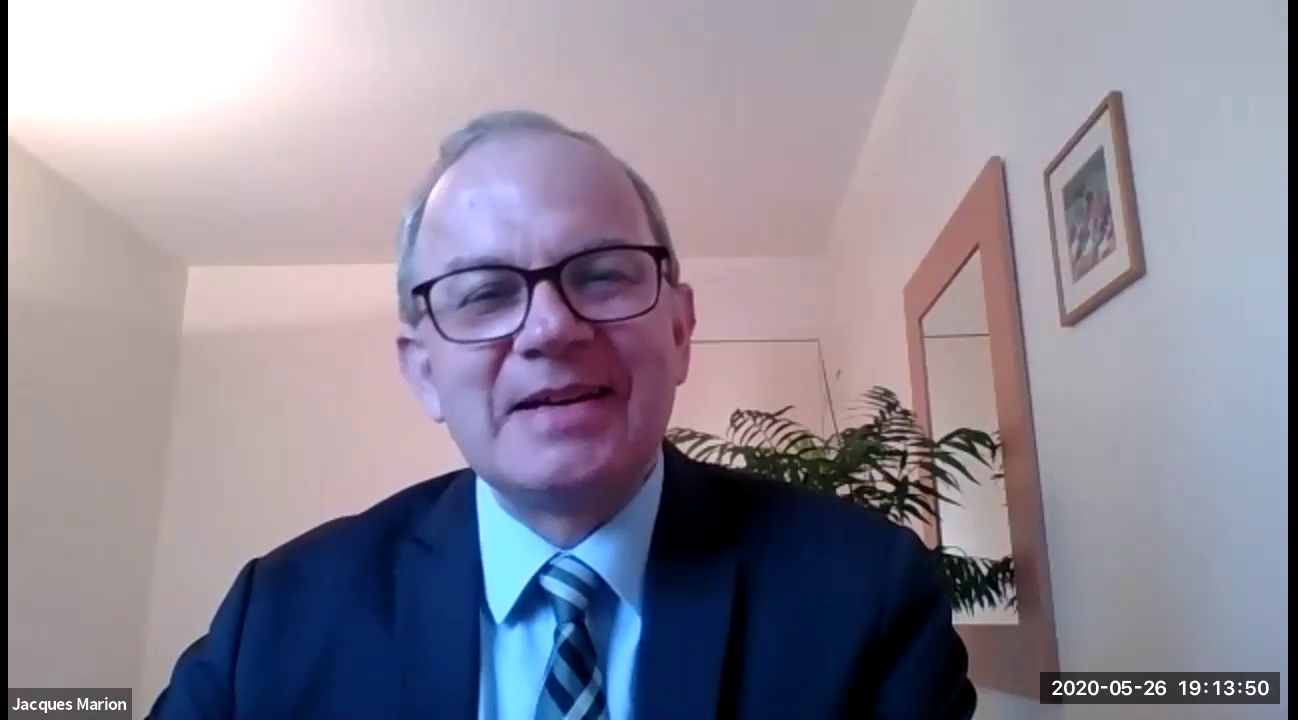 Mr. Jacques Marion, the UPF president for Europe, Eurasia and the Middle East, in his closing remarks said that UPF, with its ideals of interdependence, mutual prosperity, and universal values, is convinced that nations need to keep in place a strong multilateral system of engagement and that parliamentarians should put this ideal into practice.

Today neither the UN nor the EU truly fulfills the world’s expectation for peace, he said, because of the rise of self-interest at the expense of the common good – whether in the form of nationalism, religious interest, or ethnic exclusivism.

One conviction that led to the founding of the EU, he said, was that the interests of nations would be better fulfilled when they served a greater cause.

This principle of peacebuilding prompted the UPF co-founders, Rev. Dr. Sun Myung Moon and Dr. Hak Ja Han Moon, in 2000 to propose the revival of the UN through the creation of an interreligious council. The proposal was introduced to the UN through the Philippines delegation to the UN.

In the same way, he said, if we are to rebuild the world after COVID-19, we need institutions that maintain core spiritual values as the foundation for peace.

Mr. Marion mentioned that recently UPF co-founder Dr. Hak Ja Han Moon said that UPF, together with partnering organizations in the fields of politics, religion, business, and the media, should form “one community under God,” thereby emphasizing that unless the world unites centering on the higher principle of living for the common good, trends toward division, separation and breakdown will not be overcome.

UPF and its partnering organizations, such as the International Association of Parliamentarians for Peace (IAPP), the Interreligious Association for Peace and Development (IAPD), and others, are ideally placed to encourage leaders to take such a stance, Mr. Marion said. We have serious issues to resolve, but we also have common roots. These will allow us to move forward with the spirit of cooperation beyond nation, religion, and political ideology.

and the podcast at: https://soundcloud.com/upf-europe/upf-europe-middle-east-peace-talk-26-5-2020