From September 7 to 9, 2016, the Universal Peace Federation held an International Leadership Conference in London, the third in a series of events held this year to launch worldwide the International Association of Parliamentarians for Peace (IAPP). With the theme “Interregional Dialogue Addressing Critical Challenges: Europe, Eurasia, the Middle East and North Africa,” the London conference represented the official launch of IAPP in these three regions. About 150 participants gathered from 40 nations, including political and religious leaders, women leaders and representatives of civil society.

Thirty members of parliament from 15 nations attended the event and signed the proposal to establish an International Association of Parliamentarians for Peace in Europe, Eurasia and the Middle East. Also in attendance were two former European heads of state and ten former members of parliament.

The conference began on September 7 with a session on “A Vision for Peacebuilding in the Global Era.” The UPF peacebuilding principles and practices were presented by Mr. Jack Corley and Mr. Jacques Marion, the regional chair and regional secretary general, respectively, of UPF-Europe. Three UPF Ambassadors for Peace then commented on the presentations and gave their views on the theme of the conference: Professor Martin Ramirez, chair of the Center for Conflict Studies at Nebrija University in Spain; Hon. Erna Hennicot-Schoepges, the former speaker of the Luxembourg Parliament; and Mr. Robert Vandemeulebroucke, a former ambassador from Belgium’s Ministry of Foreign Affairs.

At the Opening Dinner, participants were warmly welcomed by Baroness Sandip Verma from the House of Lords and by Dr. Edwin Shuker, the vice president of the European Jewish Congress. Rev. Dr. Marcus Braybrooke, the president of the World Congress of Faiths, and Sheikh Dr. Hojjat Ramzy, an executive member of the Muslim Council of Britain, gave the invocations. The evening closed with Dr. Thomas Walsh, the president of UPF International, who spoke about the worldwide IAPP inauguration conference series, and former President Alfred Moisiu of Albania (2002-2007), who emphasized how significant such a conference and themes were for their nations.

The second day began with a session on “Peace and Migration: Cross Regional Perspectives.” The presentations and discussion focused on the compelling issue of refugees, their integration into their new communities and the various factors behind migrations. The speakers were:

The second morning session was devoted to the theme: “Addressing Peace and Security Challenges through Trade and Economic Integration.” The session dealt with economic integration plans between Europe and Eurasia, and the Chinese project of a “New Silk Road” connecting Asia and Europe, and it shed light on the UPF founders’ project of an International Highway for Peace connecting the world to foster economic equality and intercultural exchange and implying the creation of tunnels between Korea and Japan and at the Bering Strait between Russia and the United States. The panel’s members were:

Then began a session introducing the “Peace Road 2016” project, aimed at actualizing the vision of the International Peace Highway by promoting symbolic marches or bi cycle rides for peace throughout the world. The session was moderated by Mr. Matthew Huish, national director of the U.K. chapter of Family Federation for World Peace and Unification (FFWPU), an affiliated organization, and organizer of the Peace Road in the United Kingdom. After a video describing Peace Road events held around the world in 2015 and 2016 in support of the reunification of the Korean Peninsula and world peace, three participants representing Europe, Eurasia and the Middle East expressed their support for the project:

In the afternoon, all the participants moved to the British Parliament for two afternoon sessions that were held in Committee Room 14 of the House of Commons.

The first session at the Parliament had the theme of “Overcoming Extremism and Promoting the Peaceful Resolution of Conflict: The Contribution of Religious Leadership” and was hosted by the Rt. Hon. Tom Brake, a member of the House of Commons. Lord Nazir Ahmed of Rotherham, the first person to be appointed to the House of Lords after swearing on the Holy Quran, greeted the audience. The session focused on the role that religious leaders and faith-based organizations could play, in cooperation with political leaders, in bringing effective solutions to violent religious extremism. The panel comprised several prominent speakers:

The second session at Parliament, where the International Association of Parliamentarians for Peace was launched for Europe, Eurasia and the Middle East, was hosted by Hon. Virendra Sharma, a member of the House of Commons and the patron of UPF-UK, who greeted the participants. Moderating the session, Dr. Thomas Walsh explained the purpose of this world-level association of parliamentarians as a forum through which to work together for peace and human development by going beyond differences of ideology, race, nationality, and religion. He then gave the floor to Lord Rajinder Loomba, founder of the well-known U.K. charity Loomba Foundation, which supports widows around the world, who greeted the participants and supported the UPF initiative.

The UPF Co-Founder’s Address from Dr. Hak Ja Han Moon was delivered by her daughter Dr. Sun Jin Moon. “I will do my best to convey the warmth of love and the hopes for peace that she has in her heart,” Dr. Sun Jin Moon said, “and I invite you to all pay close attention to her message.”

In the address Dr. Hak Ja Han Moon recalled that when she spoke at the United Nations in Vienna in 2015, she called for a spiritual awakening and urged each member state to serve the whole, looking beyond national self-interests. She also asked the audience to consider establishing a fifth UN Office on the Korean Peninsula in order to work for peace in the Asia Pacific Region.

“I want to emphasize the importance of the role of parliamentarians,” Dr. Hak Ja Han Moon said in her address. “You represent the people. You are entrusted by the people with a great responsibility. If parliamentarians of the world join together in harmony and cooperation for the sake of peace, we can transform the current reality of our world, creating a world of joy, harmony and lasting peace.”

Representative members of parliament from Europe, Eurasia and the Middle East then took the floor and gave brief statements of support for the new association, starting with:

Unable to attend, Sen. Ahmed Palankoev of the Committee on International Affairs at the Russian Senate, had sent a message of support to the conference.

All the panelists then signed the displayed proposal for the foundation of the International Association of Parliamentarians for Peace, joined by the former presidents of Albania and Kosovo, the former Austrian defense minister and his wife, and the three UPF regional chairs. All the participants separately signed the proposal, then added their signature on the board.

The evening concluded with a wonderful dinner-cruise on the River Thames, during which the participants could admire famous sights of London while enjoying music, songs and dance.

On the closing day of the conference, Friday, September 9, participants had the opportunity to choose between four breakout sessions in the morning.

The session on “Family, Peace and Sustainable Development” discussed the role of the family in peacebuilding, its impact on social stability and prosperity, and the challenge to define family policies for sustainable development. The panel was composed of members of parliament and prominent supporters of family values in Europe:

A concurrent session on “Media and Peacebuilding: The Impact of Social Media” discussed the influence of social media in current societies, their role in relation to conflicts and to what extent they should be regulated by the law. Moderated by Mr. Humphrey Hawksley, a BBC world affairs correspondent from the United Kingdom, it brought together media professionals from Europe and the Middle East:

In the second morning period, the session on “Women’s Leadership in the Prevention of Radicalization” brought together women parliament members from Europe, Eurasia and the Middle East who discussed the role of women’s empowerment and leadership in countering extremism and resisting radicalization. The panel was composed of:

Since the “man representative” on the panel, Hon. Roberto Rampi, a member of the Italian Parliament, had to depart unexpectedly, Dr. Thomas Walsh joined the panel and offered his views on the interactive and complementary role of men and women in overcoming conflict.

The concurrent session’s theme was “Resolving and Preventing Conflict: Reconciling Secular and Religious Perspectives.” The panelists discussed the interplay of religious and secular perspectives in conflict resolution and prevention, in view of searching for lasting, democratic solutions to contemporary conflicts. The panel was composed of: 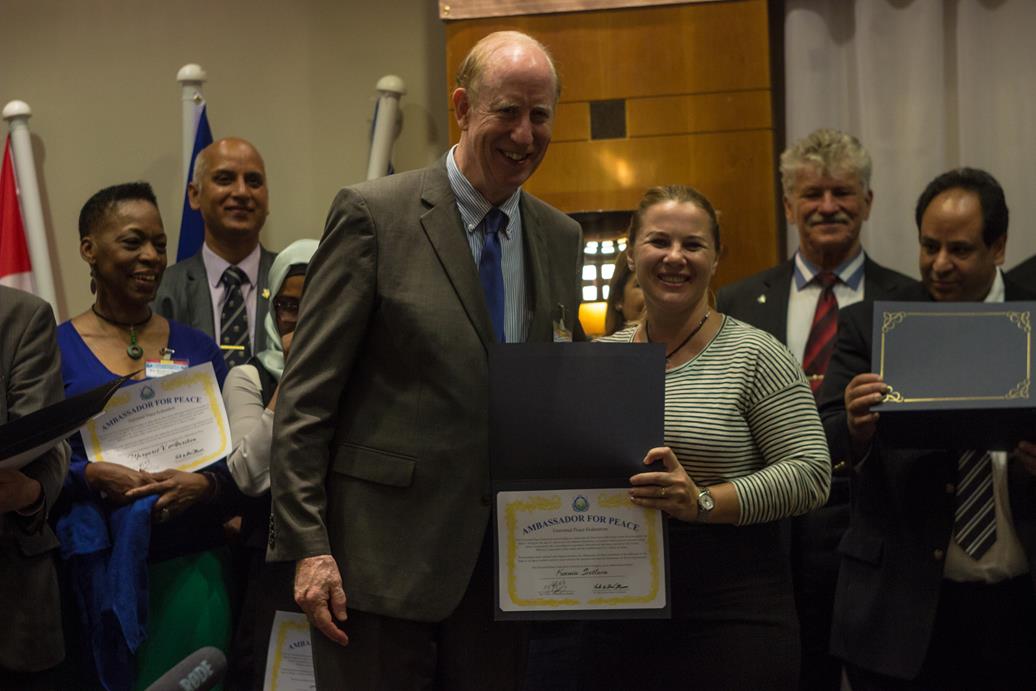 A final luncheon ended the three-day conference, preceded by an Ambassadors for Peace award ceremony in which 32 participants received a certificate from Dr. Thomas Walsh. One participant from each region offered a moving testimony on their experience throughout the conference, and two farewell songs from a professional soul singer sent off the participants.

In their evaluations, participants described their good impressions of the conference, appreciating the high quality of the speakers and the relevance of the themes discussed. They were particularly impressed by the sessions at the Parliament, by the support from prominent members of the House of Lords and the House of Commons, and by the variety of political and religious views represented in the audience. Several members of parliament expressed their desire to join the International Association of Parliamentarians for Peace and to participate in UPF activities.

Reports of the conference made the news on TV channels and some major newspapers around the world.