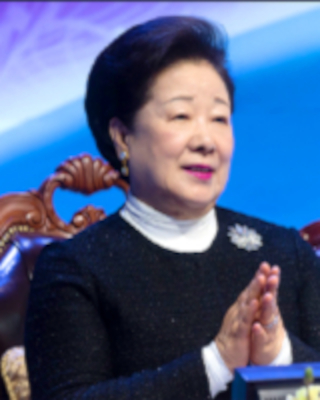 The North and the South split from each other, one communist and the other democratic, and the Korean war broke out before democratic South Korea had equipped itself with the structure with which to fight against the North. And yet, Heaven could not delay the spring breeze of the providence.

How is it that 16 UN member nations came to take part in a civil war that took place in a small country unknown to the rest of the world? Moreover, we know that most of the brave participants in the war were at that time just in their teens or 20s.  Among all human beings, they were the most innocent and pure sons and daughters beloved by heaven. What do you think induced them to step forward fearlessly for peace in Korea and the world? This alone tells us that God our creator is together with us. The brave soldiers who shed blood during this war are the courageous heroes of the Providence who will be remembered in history for all time.

From now on we should not stop. The veterans who took part in the war in 1950 are now quite elderl. Those who are still with us are in their 80s and 90s and what they wished for was a unified Korea. Nevertheless, all the grave problems arising in the world today are not only the problems of Korea. Our Heavenly Parent should be the centre through which all these problems can be resolved. If all the people in the nations of the world become the sons and daughters of our Heavenly Parent and form one great family under Him, the problems occurring today will no longer be problems. It is the duty of children to do what their parents wish. Before it is too late, I would like to erect monuments not only in these 16 countries, but in all the 60 or so countries that sent their support to the Republic of Korea back then. I'm aware that most of the 16 nations have already erected monuments in memory of those soldiers that died during the Korean War, but they still lack a complete list of their names. I wish to record each and every one of the names of the fallen for all eternity and I have made a commitment to quickly erect monuments in countries where they have not already been installed.

Nevertheless, all the grave problems arising in the world today are not only the problems of Korea . This earth, which should protect the future of humanity, is suffering right now. In 2020 alone, there have been natural calamities, localised heavy rain wildfires and terrible typhoons. We say that these problems are not my problems, so they are not my responsibility, but in reality they are. This is because they o have an effect not only on us, but also on our beloved children and their future. Moreover, human ignorance has caused a serious situation such that many in our world believe that we need to restore this beautiful earth created by God, our creator, to its original state as quickly as possible, and we should not stop at just talking about it, but actually do something.