Europe and the Middle East—The third session of the July 2021 International Leadership Conference was titled “The Power of Humanitarian Initiatives in Overcoming Division of the Korean Peninsula.”

The third session, held on July 27, had a total of 116 participants for the “live” broadcast, with an additional 289 viewers on Facebook.

The panelists considered how institution or state-level humanitarian initiatives, beyond partisanship, can contribute to peace on the Korean Peninsula by overcoming division and differences. They talked about best practices, as well as the impact of sanctions imposed by the UN and the lockdown resulting from the COVID-19 pandemic. The panelists offered recommendations for building mutual trust between North and South Korea, and ways to envision a peaceful future for all.

Mrs. Chantal Chételat Komagata, Coordinator UPF EuropeChantal Chételat Komagata, coordinator of UPF for Europe and moderator for this webinar, explained in her introduction why UPF has been organizing so many webinars about the Korean Peninsula. The UPF founders, Rev. Dr. Sun Myung Moon and Dr. Hak Ja Han Moon, were born in what is today North Korea and shared the destinies of millions of refugees fleeing the North during the Korean War. In 1991, they were able to return to North Korea to meet with Supreme Leader Kim Il Sung. During this meeting Reverend Moon clearly denounced worldwide communism. Their meeting led to numerous humanitarian initiatives aiming at a community of solidarity and mutual prosperity.

A short documentary was shown, which featured humanitarian activities in Pyongyang of the Swiss Agency for Development and Cooperation (SDC). The video showed two projects in the countryside: cultivating on sloping land while protecting against erosion and facilitating the population's access to drinking water. 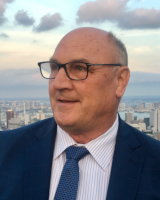 Mr. Thomas Fisler, Former Director, Cooperation in Pyeongyang for the Swiss Agency for Development and Cooperation, FDFA, SwitzerlandThomas Fisler, a former director of cooperation in Pyongyang for the SDC, said that despite the persisting humanitarian needs in North Korea, where 40 percent of the population are suffering from malnutrition, the country went into a total lockdown in January 2020 due to the COVID-19 pandemic. This measure brought international humanitarian aid to a halt.

The self-imposed isolation, travel restrictions for the population, and the restrictions on the much-needed private market economy have exacerbated the plight of ordinary people in North Korea, especially in rural areas. “North Korean lockdown measures are impacting the lives of ordinary people more than any externally imposed sanctions in the past,” he said. The people, however, are extremely resilient and show no aversion to the authorities, he said.

Looking ahead to the post-pandemic period, Mr. Fisler said that most INGOs and NGOs will need to negotiate all over again with the North Korean authorities, since all connections currently are cut. They will have to work in difficult conditions, as much material and infrastructure had to be left behind in January 2020. Traveling most likely will still be impacted by quarantine restrictions. Most importantly, communication channels should be kept open, and information should be gathered on what is happening in rural areas.

Providing medical equipment and COVID-19 vaccines certainly will be one of the priorities, although solving children’s malnutrition is even more urgent. Mr. Fisler said that “we can do nothing more than wait until the border opens, and then hopefully the government will allow to bring in some assistance. … The UN agencies could be at the forefront.”

Click here for the intervention of Mr. Thomas Fisler 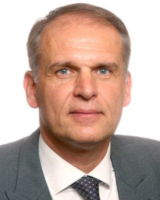 Dr. Alain Destexhe, Former Secretary General, Médecins Sans Frontières; Senator (1995-2019), BelgiumDr. Alain Destexhe, former secretary general of Médecins Sans Frontières and a former senator of Belgium (1995-2019), pointed out that humanitarian aid mostly is organized and delivered in a highly political context. Even when humanitarian organizations want to remain totally neutral and impartial, they cannot ignore this reality and merely concentrate on the suffering of the people. He knows from experience that many do not take this fact into account sufficiently.

He gave the example of the Bosnian War (1992-1995). An enclave in Srebrenica with approximately 40,000 people, most of whom were Muslims, was surrounded by Serbian military forces. The latter gave organizations such as the Red Cross and Médecins Sans Frontières access to the enclave only after they had been given the same quantity of food and drugs as that intended for the people inside the enclave. Having to accept such an unfair deal was the political price that had to be paid to have access to the starving people.

Dr. Destexhe also mentioned the 1994 genocide in Rwanda. One day, all the Tutsi staff and patients in the hospital of Butare were murdered and only Hutu staff and patients remained. All further humanitarian aid was stopped, as the organization he was working for did not want to become an accomplice of the perpetrators. “When the goal is murdering people, there is no room for humanitarian aid,” he said.

As to North Korea, Dr. Destexhe said it is very important to maintain open channels and dialogue, however difficult this may be. At any time, minimal conditions must be met to allow the delivery of humanitarian aid. As humanitarian aid organizations cannot merely trust the government, they need to be able to assess the needs of the suffering people and have a minimum of control over what happens to the relief supplies they give, if they cannot deliver themselves. 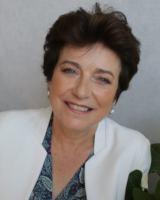 Mrs. Brigitte Wada, President Women’s Federation for World Peace, FranceBrigitte Wada, the president of the French chapter of Women’s Federation for World Peace (WFWP), an organization that is affiliated with UPF, said that the federation was founded by Dr. Hak Ja Han Moon and her late husband, Rev. Dr. Sun Myung Moon, in 1992. In 2001, the 1% Love Share Project was launched with the belief that reunification on the Korean Peninsula can be achieved if the South and North Koreans begin to regard each other with greater affection. The 1% Love Share Project involves setting aside 1,000 Korean won (approximately 1 euro) each month to support the poor in the North. This initiative has been supported by women’s associations worldwide.

WFWP-Korea participated in the reforestation of North Korea’s Kaesong region in 2005 and provided emergency aid to North Korean flood victims in 2006 and 2008, among other service projects. Since 2010, however, it has become difficult to work in North Korea, due to the tense diplomatic relations between the North and the South. WFWP therefore has been helping North Korean women who have fled to the South to integrate into society.

Furthermore, WFWP in 2007 organized a World Assembly of Women Leaders at North Korea’s Mount Kumgang. It was the first international gathering of this magnitude, promoting world peace and the reunification of the Korean Peninsula, to be held in North Korea. Proposals were made to create a “Peace Zone” near the Demilitarized Zone (DMZ), where women from North and South Korea can meet and generate innovative strategies for peace and human development.

Thanks to its contributions to the rapprochement on the Korean Peninsula, WFWP-Korea is now a member of the Korean National Council for Reconciliation and Cooperation, which has a membership of some 200 NGOs, and a counterpart in North Korea.

To conclude, Mrs. Wada reminded us of the words of Reverend Moon, who said, “The unity of the Korean Peninsula cannot be achieved through political, economic, or military means, and none of these will succeed without another prerequisite: true love.”

Click here for the intervention of Mrs. Brigitte Wada

During the question-and-answer session some interesting questions from the audience were brought forward, such as whether humanitarian aid organizations are a normal phenomenon or rather a tool to compensate for the shortcomings of the state. Dr. Destexhe said that these past 30 or 40 years have seen the development of NGOs and independent relief organizations in many fields. They are a strong pillar in society, he said.

To the question of when North Korea will reopen its borders and what may happen then, Mr. Fisler estimated it would take one or two more years. He emphasized the need for confidence-building and trust-building measures as a way to pursue humanitarian work in the country. He also warned that funding for North Korea may not be a high priority once the global pandemic is over and that “reopening humanitarian operational space will be a cumbersome process.”

Questioned whether North Korea refuses humanitarian aid for ideological reasons or out of fear, Mrs. Wada responded that deep in their hearts the North Koreans have some pride. Therefore the authorities need to be approached differently, she said. They definitely do not want to be pitied by foreign aid workers. Nevertheless, they did appreciate the projects of the WFWP in the past, she said, and for that reason these will be continued as soon as possible.

Dr. Destexhe added that much depends on whom humanitarian organizations can communicate with. They often have to go through the official channels, while informal contact with ordinary citizens is discouraged or simply made impossible.

The moderator, Mrs. Komagata, ended on a positive note by saying that ten months after the inter-Korean hotlines were severed, when the North destroyed a joint liaison office in June 2020, the leaders of both countries resumed communication by letter in April, and exactly on the day of this seminar, North and South Korea restored their direct communication hotlines—a concrete step to restoring trust and confidence.

Humanitarian organizations should maintain open channels with the respective North Korean missions abroad during the lockdown and make sure funds are available afterward.

Delivering aid should never be without conditions. There has to be a compromise between a regime’s desire to control everything and the necessity for the humanitarian organization to assess the needs and to control how the aid is being given.

It is important to continue the dialogue over time and to make constant efforts to help, not abandoning it even in the face of difficulties.