Europe and the Middle East—The third session of the June 2021 International Leadership Conference was “Europe and Russia’s Relations to the Democratic People's Republic of Korea.”

The June 29 session was one of six ILC webinars that were held from June 24 to 30, 2021, under the theme of “Toward Peaceful Reunification of the Korean Peninsula.” A total of 159 participants attended the session.

When considering the relations of Europe and Russia with the Democratic People's Republic of Korea (DPRK), there is a wide range of perspectives: the North Atlantic Treaty Organization (NATO) nations, many of which were part of the United Nations alliance in the Korean War; the non-NATO European nations; neutral nations such as Switzerland, Austria and Sweden; and then the Eurasian nations, primarily Russia, which supported the DPRK.

Although Europe's distance from Korea means that tensions on the peninsula are less of an immediate danger, Europe would be within the range of intercontinental ballistic missiles fired from the DPRK. Europe's close relationships with the United States, as well as with Japan and the Republic of Korea, mean that the situation on the Korean Peninsula is relevant. Russia, which can provide a deeper insight into the DPRK perspective, also has its own interests in the future of the peninsula.

The session’s panelists discussed policies, interests, and desired outcomes of the primary stakeholders and offered recommendations for steps that can be taken toward a peaceful resolution of the Korean conflict.

Dr. Natalia Romashkina, a professor and head of the Information Security Problems Group at the National Research Institute of World Economy and International Relations, Russia 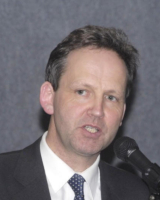 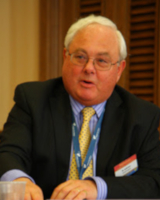 Hon. Keith Best, former member of the British Parliament, UPF UK Chair of the Board of TrusteesHon. Keith Best, a former member of the UK Parliament who is the chair of UPF UK, introduced the distinguished and expert members of the panel and invited the audience to learn about Europe and Russia's relationship to the Democratic People’s Republic of Korea. 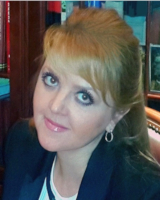 Dr. Natalia Romashkina, Professor, Head of the Information Security Problems Group, National Research Institute of World Economy and International Relations, Russia Dr. Natalia Romashkina explained that her interest in North Korea began from stories told to her about her grandparents who knew Kim Il Sung personally as a “capable and great commander” of the Red Army during World War II.

She spoke of a recent conference that President Vladimir Putin held with the Security Council of the Russian Federation to discuss several growing threat factors, including an increase in arms on the Korean Peninsula, completion of DPRK missiles, and US-DPRK tensions. Describing the severity of the situation—the DPRK having been issued nine sanctions thus far and having completed three major missiles, Dr. Romashkina concluded that the level of threat is high.

Russia recently has shown support for the DPRK, encouraging the United Nations to lift economic sanctions during the pandemic. However, the United States vetoed this, and thus tensions between the United States and the DPRK increased. This will be a huge obstacle to the denuclearization of North Korea, she said, because trust and support between nations are what will encourage progress.

Dr. Romashkina concluded by emphasizing that the situation on the Korean Peninsula is now a global issue and that Russia not only hopes for the United States and Russia to catalyze change but also for the six-party talks to continue with dialogue supported by Europe.

“Measures of trust need to be restored,” she said. 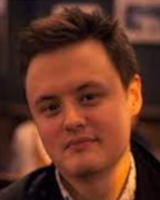 Dr Edward Howell, Stipendiary Lecturer in Politics at New College, University of Oxford, United kingdomDr. Edward Howell gave an extensive analysis of the situation on the Korean Peninsula. He started by shedding light on moments in world history of attempted reforms as he made the point that change is not easy.

He broke down Korea’s ongoing situation into three key points of analysis, explaining the issues and observations concerning 1) the individuals involved, i.e., leaders and decision-makers 2) the regions involved, and 3) the broader perspective, i.e., the relationship between nations and world-level systems that maintain peace and security. Within these three distinct levels of analysis, Dr. Howell made it very apparent that there are numerous facets that make up the current complex situation on the peninsula. These things should be carefully considered when creating action steps for the reunification process, he said. Instead of constantly focusing on the end goal, he said, we ought to take one careful step at a time—with the first steps directed toward the question “How can we build trust?”

In response to a question from Mr. Best on the current existing tensions, Dr. Howell suggested that the United States try to change its strategy in order to achieve greater progress—changing the goal from total denuclearization to something realistically attainable as a first step, such as reducing the threat reduction to the United States or to its region. 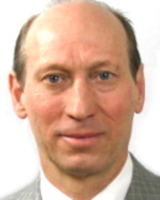 He likened the situation on the peninsula to what he currently sees in Europe. As Sweden also has become a battleground for big power rivalry, General Engman has witnessed the increase in military build-up and military exercises; he stated that nuclear deterrence is an important part of the picture now. However, parallel to this competitive security environment, strong efforts have been made to promote the rule of law, predictability and transparency in order to avoid misunderstandings, improve risk management and, in the long run, advance stability.

Despite the similarities of the situation on the Korean Peninsula to what he has observed in Europe, there are major political, economic and cultural differences, he said. As time goes by, he sees that “one size does not fit all.” What is needed, he said, is a variety of instruments and institutions to tackle different and changing security and military challenges.

He offered six potential points of action, including a renewed participation of alliance, increased dialogue between Russia, China and Europe, supporting the DPRK, and offering humanitarian relief in response to the COVID-19 pandemic.

In conclusion, General Engman expressed his confidence that though Sweden and East Asia are geographically far apart, there are many similarities between the two. Sweden can offer experience and lessons learned and can be a facilitator in collective security-related issues and trust-building, he said. 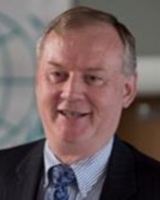 Mr. Corley mentioned that, following a historic 1991 meeting in Pyongyang with North Korean leader Kim Il Sung, Reverend Moon established an automobile factory in North Korea and constructed a spiritual/cultural center in Pyongyang. These efforts and others have opened many doors to the leadership of that country, Mr. Corley said. In the coming years, he said, under the leadership of Reverend Moon’s wife, Dr. Hak Ja Han Moon, the world will see positive steps being made toward the peaceful reunification of North and South Korea.

To conclude, Mr. Corley emphasized his belief that Russia will play a crucial role in this process, as it is still a respected partner of North Korea and the two nations share a border. Russia can convince the North Korean leadership of the benefits of dispensing with an ideology that has ruined its economy and left its people without hope for the future, he said. Russia can offer a face-saving way for the North Korean leadership to make the necessary changes.

Click here for the text of the Intervention of Mr. Jack Corley

At the end of the session, Robin Marsh expressed his deep gratitude to all the speakers for their time and generous insights on the topic of relations of Europe and Russia with the DPRK.

Click here for the report on the Q&A session