Europe and the Middle East—A number of distinguished women spoke about women’s potential as peacemakers.

The online conference of the International Association of First Ladies for Peace (IAFLP), one of the UPF associations, was part of the 2021 International Leadership Conference.

The theme of the IAFLP session, which was held on April 30, 2021, was “Women in International Peacemaking and Reconciliation Processes.” 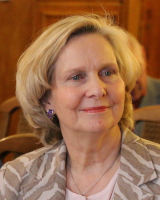 Mrs. Handschin-Moser said there are many exemplary women leaders with a wealth of experience in dealing with conflicts and peace processes, thereby acquiring critical tools which are applicable everywhere.

She also said that as the world observes Korea, hoping for a long-awaited political agreement, many women are thinking that they do not want to wait for the political signing of a treaty but want to contribute from afar to the acceleration of peaceful reunification on the Korean Peninsula.

Hon. Dr. Elena Drapeko, a member of the Russian State Duma and first deputy chair of the Committee on Culture;

Boram Kim, who works for the United Nations Development Programme (UNDP) in Germany. 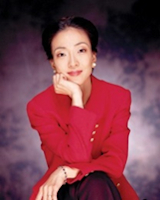 She explained that the conference was convened because of the ongoing division on the Korean Peninsula. Regarding the rise of the Pacific Rim era, she indicated that mistakes of the Atlantic civilization era should not be repeated. Despite efforts by international bodies, sustainable world peace has not been realized and social and environmental problems still remain.

Dr. Moon praised the efforts of Mother Moon, the UPF co-founder, who is pursuing world peace by convening global leaders from all walks of life to address root causes of world problems. Mother Moon’s message simply states that God is our common Heavenly Parent, and the way to peace is to respect one another as God’s children. Thus, women realize their unique value through building healthy families and initiating various peace projects for the benefit of all.

WFWP has been active in 30 European countries since 1992, with programs at the United Nations offices in Geneva and Vienna. Women from conflict areas have built relationships of trust and issued joint declarations for governments and UN agencies.

Dr. Moon referred to Eleanor Roosevelt, a US first lady during the 1930s and 1940s, who was the first chair of the United Nations Commission on Human Rights and played an instrumental role in drafting the Universal Declaration of Human Rights.

Similarly, Dr. Moon said, the IAFLP can become a platform on which to realize a world of lasting peace based on interdependence, mutual prosperity, and universal values. 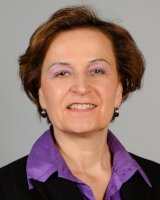 She emphasized the importance of women using their unique value to claim a place in peace negotiations, despite not always being heard. Both men and women are important in the often lengthy and laborious peacemaking processes, she said, but the main focus should not be on appearing at the decision-making stage.

In her “limited experience in peacemaking,” she observed many similarities despite some differences in the processes, and offered three key elements, generally applicable in peace negotiations.

First, study and familiarize oneself with the nation’s history and specific traits that may justify certain decisions and help understanding.

Second, be aware of the cooperation between authorities and NGOs and include all sides.

Third, utilize personal examples of democratic societies to help other members to connect to their stories, struggles and victories. She concluded that reconciliation is best achieved through meetings, discussions and peaceful communication at first. When all parties involved understand that the goal is a win-win solution for all, history can be made, she said. 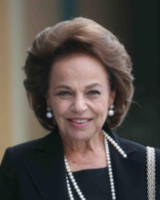 H.E. Nayla Moawad, First Lady (1989), Minister of Social Affairs (2006-2008), LebanonH.E. Nayla Moawad, who became active in politics following the assassination of her husband, Lebanese President René Moawad, in 1989, stated, “If we want to improve the world situation, we need to push women to be active in politics.” She referred to the increasing number of women engaged in Lebanese politics over the last 40 years.

In her view, good political leaders need more than a good CV. They should connect to the people with heart, understand their needs, and love and encourage them to achieve their goals. Referring to the Rene Moawad Foundation, she stressed the importance of cooperation between authorities and NGOs in fulfilling essential tasks to serve the people.

Furthermore, she said, women should educate their children to be open to others and to be peacemakers in the face of conflicts, wherever they occur. Having convinced many Lebanese women that they could achieve great things through cooperation, consultation and mutual support, she now sees them discovering their value and gaining confidence. Despite Lebanon’s current difficulties, she expressed hope that through maintaining contact with others, all that was lost can be recovered. 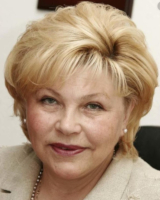 Hon. Dr. Elena Grigorievna Drapeko, Member of the State Duma, Federal Assembly of the Russian FederationRussian parliamentarian Dr. Elena Drapeko elaborated on reasons for conflict and bloodshed. Poor knowledge of the history of one’s own nation and other nations can be the root of misunderstanding and mistrust, she said, resulting in conflicts and violence. Observing this, she initiated reconciliation projects through cultural exchange programs in villages to enable people to become acquainted and build trust. Further examples include the successful involvement of mothers in areas of conflict (near the border with Ukraine) in achieving a ceasefire, and the repatriation of orphaned children from Syria. Dr. Drapeko referred to eminent historical Russian women who could effect change in their lifetime, such as Princess Olga, Catherine the Great, Valentina Tereshkova (the first woman cosmonaut in 1963), and Valentina I. Matviyenko, a key current political figure. Many more women need to be involved in politics to promote peace and understanding, she said. 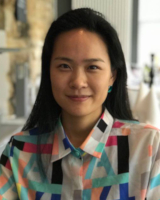 Ms. Boram Kim, Peace and Development professional, UNDP, GermanyMs. Boram Kim of the United Nations Development Programme offered both a Korean and UN perspective She described the role of women in peacekeeping missions within the UN in the last two decades, presenting data from global UN peacekeeping missions, which indicated an increase in women’s participation from 1 percent to 11 percent in police units since 1993.

She mentioned the Korean peace negotiations from 2018 and 2019. Those key events were created to help with conflict resolution, but finally stalled, and tensions with North Korea remain.

She concluded her speech with a thought-provoking question: “How can we position women to be considered sustainable changemakers in peacemaking and reconciliation processes?” She suggested we move from anecdotal storytelling to generating evidence; tailor existing international commitments (e.g., SCR 1325) to practical application; and value women’s and men’s interests and contributions equally.

The final slide showed an image of the South Korean president meeting with his top aides in July 2020—a group of nineteen men and three women.

A question-and-answer session followed. Simran Rai, a UPF intern from the United Kingdom who also works with Youth and Students for Peace, presented the questions that audience members had submitted.

Perhaps the outcome hoped for the most, she said, is that the people of the Koreas, especially North Korea, will learn about the global focus and outpouring of concern through these webinars, contributed by people of all sectors, cultures and faiths. Perhaps this too can ease tensions and encourage a brighter future, she said.