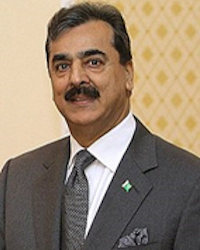 Distinguished leaders, excellencies, ladies and gentlemen—good afternoon and asslam oo alikum [“Peace be upon you”]. It is both a pleasure and a privilege to be addressing this august gathering of eminent luminaries.

Let me at the outset thank our hosts, the World Summit-2020 of the Universal Peace Federation (UPF), for extending to us, as always, very warm and generous hospitality.

I am greatly pleased to be in the beautiful and emerging country of South Korea, which is known for its enterprising spirit and dynamic people.

As citizens of the world, we all know that hostility and strife in one part of the world quickly permeate through national borders and affect the entire world.

For this reason I find the topic “Realizing Peace and the Reunification of the Korean Peninsula through Interdependence, Mutual Prosperity and Universal Values” a very pertinent one.

Excellencies, allow me to talk about these issues from a worldview perspective and then take you through some of the events in the region from which I come—and their deep impact on world peace and prosperity.

The world has seen only prosperity through the free movement of people, ideas, goods and services. And today, as many countries eschew the building blocks of our interdependence, allow me to say we do it at the risk of taking the world back to an era of warring tribes.

As we marched toward globalization, we realized that together we could solve many problems that we were unable to tackle alone. It’s interesting to note that today we are living in a world where more people are dying from accidents than from war and terrorism. More people are dying from obesity than from malnutrition. So clearly the global liberal world order that we adopted after World War II led to mutual prosperity. Yes, there are still people dying from malnutrition and terrorism and even war—but we have come a long way in reducing that number drastically.

The current global world order needs to evolve to address the latest challenges. However, I see a disturbing trend to break down the existing order and lead us to a world where no order exists at all. All states and non-state actors can act in any way they desire as far as they have the right to do it.

This is not good for world peace and prosperity. And we must act fast to halt this trend.

Multilateral institutions that give us a universal code of conduct—both to give us justice and to hold us accountable—have made this world a safer place.

Many times we collectively failed to deliver to those who are the neediest, but by and large states valued and followed the norms of international order.

I will give you an example from my region. Kashmir has remained a disputed territory according to the dictates of Security Council Resolutions starting from 1948 going up to the 1960s.

This, ladies and gentlemen, has far-reaching consequences for peace and integration in our region. This act and many attempts to break previously sacred red lines have brought back the possibility of conflict between two nuclear-armed states in South Asia.

The world should address Indian aggression and encourage India to come back to the fold of international order and not renege on its international, national and bilateral commitments.

In my term as prime minister, we were able to develop cohesiveness and unite people under the common banner of Pakistan’s growth and development. When our government came into power, Pakistan was facing a most serious threat from terrorists who were threatening the very fabric of our society.

This threat was two-pronged. First, they were spewing extremist thought and hatred in our population. Second, they were using bombs and bullets to attack our armed forces, law enforcement agencies and innocent citizens.

When I became prime minister, we decided both to negotiate with those who were willing to acknowledge and respect the writ of the state and also to start a military operation against those who were attacking our children. Later they took revenge from me by kidnapping my son for three long years.

After many sacrifices, today Pakistan is by and large free of terrorist activity and we have eradicated their footprint in our country.

The title of this conference, “Realizing World Peace and the Reunification of the Korean Peninsula through Interdependence, Mutual Prosperity and Universal Values,” contains a strong message.

We need to realize that war is not an option for the resolution of conflicts, whether in the Korean Peninsula or in other parts of the world. The most viable option for the parties is to pursue peace and reunification through peaceful means, political consensus and developing interdependence.

Interdependence would help establish trust, develop stakes, and forge economic cooperation and social harmony. These aspects are essential for achieving peace and unification. They also would bring about economic prosperity and well-being of the people.

Besides economic prosperity, a peaceful coexistence between North and South Korea would have several benefits for the region and beyond. It also would help stabilize US-China relations, which is also vital for the stability of the entire Asia Pacific region.

I once again thank the organizers of this summit for their wonderful hospitality. I am sure that, like me, all of you will carry back fond memories of this beautiful country and the people with whom we have interacted.