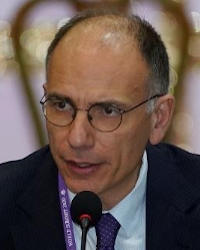 I’ll try to focus my brief presentation on five lessons I personally took from my experience as prime minister during the migration crisis we had in the Mediterranean. Italy was in the first role, and, of course, it was very important for us because it was the most difficult challenge I ever had in my political life.

It was, as you remember, the most relevant migration crisis in Europe, in the European Union, in terms of dimensions, in terms also of diversity and in terms of challenges. It was very, very challenging also because of the contemporary financial crisis. We had both together, and that was one of the main problems because of the consequences to the domestic, political and social landscapes in the different European countries.

At the same time the European Union wasn’t ready with tools, with a comprehensive migration policy, because we weren’t ready to deal with such a big crisis, and at the same time we had a big governance problem discussing whether there should be intervention at the national level or the European level. And all this discussion was for a long period the main focus and the main problem of the lack of delivery.

So, my five lessons are:

One: The juridical distinction between refugees and migrants for economic reasons is the key point, but at the same time it’s a very difficult issue. It is so complicated when you are on the ground, when you are in the first role, on the first front, to be able to really have separation between complicated issues like that. At the same time, without a focus and effective distinction, it is very complicated to give the right to refugees first of all, and to be effective in these responses.

Two: A second very important topic is the search-and-rescue mission. We have to keep in mind that saving lives is not a migration policy; it is our first duty. We must have an effective and comprehensive delivery in this search and rescue, first of all, because the Mediterranean is a very dangerous, large sea. We think that search and rescue is part of migration policies, and it is not: It comes before.

Three: We need fair information while in the migration crisis period, because the problem of the large gap between perception and reality on this topic may be one of the most difficult obstacles. In my country migrants are 8 percent of the population, and the perception in the public opinion is that they are 22 percent. It is not only in my country that the general gap between perception and reality occurs, and this is part of the problem.

Four: We need to change the way in which education gives our young people the tools to deal with the changes in our societies that migration policies and migration laws are bringing. This applies to education both in countries of the migrants’ origin and in European societies. It is absolutely decisive, and without investing in education in this side I think the challenge will be higher and higher.