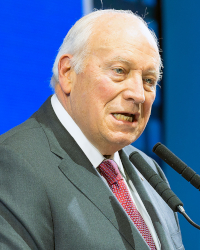 Thank you very much, and good morning to all of you. You’ve certainly given me a warm welcome to this conference, and to this always-impressive capital city, and I greatly appreciate the hospitality we have all found here in Seoul.

Speaker Gingrich and I go back quite a ways – in fact, we both became members of the House of Representatives on the same day 40 years ago. I sized him up back then as one of the brightest guys in politics; that’s exactly what he is today, and I’m happy to join him at this forum.

Naturally, too, being in Seoul once again reminds me of past trips I made to South Korea as secretary of defense and as vice president. My meetings here always involved crucial business, because South Korea and the United States have built one of the great partnerships in our world.

You can see that vital relationship at work in trade, joint efforts in diplomacy, cooperation in security and intelligence, cultural and educational exchanges, and of course the sizable presence here of U.S. combat forces.

The U.S.-South Korea alliance has endured these many decades for a few simple reasons, beginning of course with shared values, and mutual trust in every instance. Formed in the bitter circumstance of war, it has been confirmed over 65 years that have seen South Korea become a preeminent democracy and economic power.

On the strategic map, we in the United States have long counted on this nation as a stable, forward-looking, and responsible force in a region where that good influence is always needed. Look at South Korea today – this prosperous, peaceful and free nation – and you’re surveying one of the truly remarkable achievements of modern times.

In an address to Congress after his return home, General MacArthur observed that, quote, “the fortitude of the Korean people defies description.” President Eisenhower, likewise, spoke of their “courage, stamina and self-sacrifice.”

The mention of such names recalls an era of monumental choices that defined America’s purposes for generations, and to this day shape the world we live in.

Whether American presidents have been Democrat or Republican, certain principles and objectives guided our foreign policy. One basic operating assumption is that with our economic, diplomatic and military strengths, the United States has more than power and influence. We have special responsibilities.

And when we take those obligations seriously, America and our friends are safer, and the world is a better place.

In the aftermath of wars, America has remained not to collect spoils but to rebuild entire countries. We have overcome tyrannies, and then stayed to make sure that new tyrannies did not rise in their place.

In Asia, Europe and places in between, America has held back threats and stood by friends.

For many millions of people, generations of peace have come to feel like a normal and natural state of affairs. And yet that is only because of the structures of security that we built with our allies and have defended at great cost to ourselves.

It’s not a perfect record; it’s just a record more impressive and admirable than that of any other great power in history. And anyone who doubts how critical American engagement is today need only consider the array of alternatives.

Rival powers have their own ideas about the uses of influence, and their own definition of stability. They take freedom lightly, don’t have much regard for the rights of people in their own countries or elsewhere, and basically seek to do whatever serves the advantage of their own elites. When they break agreements or violate norms, their conduct is a lot easier to condemn than to stop. The test for some players in this world is simply this: Can they get away with what they want to do? If they can, they will, end of discussion.

Once we imagine how different the world would look as these regimes grew more dominant, the case for American engagement makes itself. Least of all, do the South Korean people need any reminding of the difference that American influence can make, or how critical that engagement can be.

We meet, of course, during another very consequential time for the United States, and, above all, for the people of this peninsula. For good reason, your conference is focused on the summit meeting set for later this month. And though it’s not for me as a private citizen to represent any views other than my own, it’s enough to offer a few general observations about the situation with the North.

The difficulties that President Trump and our diplomats have faced are familiar to anyone involved in past efforts to reverse North Korea’s nuclear program. And if diplomatic success depends on anything, it depends on not repeating past mistakes.

The most common mistake is one that our negotiators are surely mindful of. That would be to pursue a deal merely for the sake of having a deal, and regardless of whether it actually serves the ultimate objective.

This can easily happen amid the suspense and anticipation of a big summit; there’s always a temptation to make one more concession, and then another, just so an agreement can be announced. Our team needs to resist that temptation, keeping the focus on the only objective that matters.

It has to be the complete, verifiable and irreversible dismantling of the regime’s nuclear weapons capability, and nothing less.

I think back to a time when I was in Congress, at the height of the Cold War, and all eyes were on a meeting in Reykjavik, Iceland. Expectations were high; there was tremendous pressure on President Reagan and the American delegation to produce a deal with Gorbachev and the Soviet Union. Reagan, however, could see the difference between a deal that won him praise, and a deal that met his objective. When honest effort failed and no meaningful agreement could be reached, he considered the matter concluded and that summit was over.

At the time, commentators declared it an American failure. And yet within five years, the Soviet Union fell apart and the Cold War was over. For that, we can thank, in large part, an American president who couldn’t be diverted from his objective, and who always operated from a position of strength.

A similar determination is needed now, in negotiations with a regime highly skilled at extracting concessions in exchange for nothing. We all remember the Agreed Framework that the regime signed in the 1990’s, a deal immediately followed by serial violations. And I well recall, from my time as vice president, how North Korea simply bought time by negotiating terms it had no intention of observing anyway.

The pattern has generally been the same: They make agreements. They pocket the benefits of those agreements, and then they continue on with their weapons program. That’s how we got to where we are today, and the last thing our side needs are more preemptive concessions.

Now it’s true that, at a moment like this, we don’t want to get locked into every past assumption, either. North Korea isn’t any better than it was 10 or 20 years ago, but we are dealing with a different dictator.

And it is conceivable that he approaches these negotiations making a better assessment of long-term risks and rewards than has guided the regime so far. Not likely, but we have to be open to that possibility, and the best strategy in either event is to leave no doubt about our own intentions.

Whatever the strategy or designs of North Korea, that regime should never be left speculating on American commitments, or on our resolve to keep them.

They must understand, above all, that our partnerships and military alliances in this region have never been more important, and that the security commitments of the United States will never be compromised or broken.

Peaceful outcomes do not follow when America and our allies leave room for ambiguity and guesswork about where we stand. That’s true in the case of North Korea, and with every other regime that would threaten us, or our friends, or our interests in the world.

Every global actor should have the certain knowledge that America keeps its word – and more than this, that our word is backed by the military means to sustain every commitment.

We hear events in the world described sometimes as if they followed some ebb and flow beyond our control. In reality, of course, some of the most momentous turning points have come about by deliberate decisions and actions. And none are more consequential than the great alliances we formed so long ago, and which remain essential to keeping the peace.

Here on the peninsula, as elsewhere, so much rides on the structures of security that America and our friends have maintained these many decades. An international order that has enabled such great freedom and progress is worth all the effort, and all the resources, that it still demands of us.

Here in this hall today, there is certainly no lack of conviction, and no lack of commitment to the ideals that give strength to free peoples everywhere. From points far and wide, you are here in the cause of liberty, democratic values, and peaceful dealing among nations. For all that, I commend you, I encourage you to press on, and I wish you success. Thank you very much.