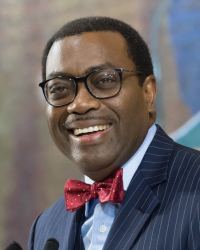 I am delighted to be here today. It is such a great honor to have been awarded the Sunhak Peace Prize. I would like to heartily congratulate my co-Laureate, Waris Dirie, and commend her for her global fight against female genital mutilation.

This Prize is not about me. No one should ever work to win a Prize. I serve God and humanity. For my life is only useful to the extent to which it helps to lift millions out of poverty.

But when one's effort is recognized, then one is very humbled: so thank you so much to the Chairman and Committee of the Sunhak Peace Prize Foundation, and the nominators around the world, for this great honour bestowed on me. The Sunhak Peace Prize is a call to do more for our world - and I will.

I wish to commend the founder Dr. Mrs. Hak Ja Han Moon for setting up the Sunhak Peace Prize to recognize work to make the world a better place. The ideals that you stand for, a world where we live in peace, with one another, is not only the decent thing to do; it is a moral imperative.

And your launching the Sunhak Peace Prize shows the power of family bonds. I would like to recognize, as I always do, my dear wife of 35 years, Grace. She is not here tonight but I am sure she is watching this live telecast at home. Grace has been my pillar of support, strength and success. Without her I would not be here tonight. I love you and appreciate you more today, than when you agreed to marry a young man who did not have much more to offer other than his love, affection, commitment and dreams. For believing in me and us, thank you!

The human race is one family, regardless of nationality, religion, race or color. We all have the same blood running through our bodies. We are all citizens of the world. When one suffers everyone does!

There is tremendous suffering going on in the world. Over 850 million people are hungry, with over 150 million children malnourished. While progress is being made, we are not winning the war on global hunger. There cannot be peace in a world that is hungry.

Hunger persists in regions and places going through conflicts, wars and fragility. Those who suffer the most are women and children.

When the ego and pride of the mighty clash, the consequences are felt by the weakest among us: children. They do not create wars but the world's children suffer from it the most.

The pictures of walking skeletons breaks our hearts, eyes so hollow, with hearts beatings from skeletal stomachs which seems to say "mama why am I not getting food?". But their mamas are also not getting food.

God made the stomachs to be filled not to go empty. Today the budgets spent on the military far exceeds what we are putting up to improve agriculture and feed ourselves.

The world cannot plow with guns; and beans and rice seeds are needed more than bullets. Seeds give life. Bullets end life.

In the 700s, a Bible prophet by the name of Isaiah urged that the world should turn its swords into plows and spears into pruning forks and that they learn to cease from war.

Wars build nothing. To secure our world we must end the endless desire to look for reasons for conflict. Let's instead find reasons to increase support for millions of the poor to feed our world.

For a peaceful world will be a food secure world.

There must be accountability to the poor. And we must reduce global income inequality. Think about it only 1% of the rich in the world own almost 50% of global wealth. The poor are stuck only to end up eating crumbs, if any at all, that fall from the tables of the rich. We need wealth, yes, but we need wealth for everyone not just a few. The sense of exclusion and lack of equity or fairness often drives conflicts.

But nothing drives poverty more than corruption. Corruption is like a blazing fire, it destroys everything in its path. Children cannot go to school or attend poor schools. Hundreds of millions go hungry every day. People living without insurance, who at the first illness spend their entire livelihoods just to survive, if ever they can. The hope of the future, the youth, waste on our streets. Millions go without health insurance. Those who hoped they would make it in the cities end up in the world's growing urban sprawl and slums, their future drowned.

Yet resources meant for them are lost to the rising tide of corruption. There is a compelling need for public accountability for the people, especially for the poor whose only hope is for governments to help them unlock possibilities for a better future, for them and their children.

I remember my time as Minister of Agriculture in Nigeria when I had to fight corruption. We succeeded in ending 40 years of corruption in the fertilizer and seed sector, using a simple tool: mobile phones, to deliver electronic vouchers directly to farmers. This allowed them to buy seeds and fertilizers themselves from the private sector suppliers. We cut off the middlemen; the rent seekers, who for decades have gotten fat on Government contracts, while the poor were drained. We ended Government direct distribution of seeds and fertilizers.

It was tough, but it worked. Within four years the system reached over 15 million farmers. One of the farmers, a woman, told me, holding up her phone to show me she's received her electronic vouchers: "now we can live with pride". This electronic wallet system for farmers is now going global and now, at the African Development Bank, we are helping to expand it across several African countries.

Corruption does not invest in the future, it kills the future.

That's why the African Development Bank is working hard, with governments, to improve transparency, governance and accountability across the continent. We are improving the transparency in the delivery and implementation of our projects. Indeed, last year the global report on "Publish What You Fund" rated the African Development Bank as the 4th most transparent institution in the world.

We are working hard to build a brighter future for the continent. At the African Development Bank we are investing $24 billion under a bold "Feed Africa" initiative to help the continent achieve food security within ten years. We are already reaching millions of farmers with our goal to reach over 35 million farmers.

To light up and power Africa and provide universal access to electricity, the African Development Bank is investing $12 billion with goal of leveraging $45-50 billion, over five years. A lot of progress is being made and in the past five years we've provided electricity to over 25 million people.

Yet, there's still so much to do to make the world a better place for all. That's why this Sunhak Peace Prize is a great inspiration for me. It is a call to do more for those least privileged around the world and especially in Africa.

Nothing is more important than ensuring that we feed the world and eliminate hunger and malnutrition. Hunger is an indictment on the human race. Any economy that claims growth without feeding its people is a failed economy. Nobody has to go hungry, white, black, pink, orange or any colour you can think.

There must be political accountability for hunger around the world. A well fed and healthy population will work harder and be productive. Lower price for food will expand disposable incomes, allowing households to save and invest in the education and health of their children. Healthy populations will live longer raising long term savings pool. And most of all, well fed children will learn well, for an empty stomach dulls the brain. That's why the best infrastructure we should build is "grey matter infrastructure", simply put the "brain infrastructure". And nutritious food is the oil for the brain.

So, let's turn our swords into plows and our spears into pruning forks. Let's turn our guns into seed planters, and replace bullets with seeds to grow our food. Let's end the indignity of hunger in our world, for God wants it so.

For even when Jesus was asked by his disciples to teach them how to pray, his first request was "give us this day our daily bread". That means Food First!

That's why I am fully dedicating the whole of the $500,000 cash award of the Sunhak Peace Prize to my Foundation, the World Hunger Fighters Foundation, to carry on the Lord's request to provide "daily bread" for everyone around our world.

Thank you all very much and God bless you all.