We all live under the same sky, but we do not all have the same horizon

Contribution to the panel:

The Role and Relevance of Religion in Building Inclusive, Peaceful and Prosperous Societies. 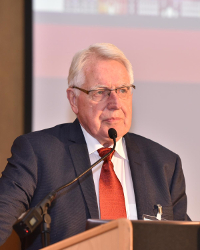 As it is said in the preamble to this panel, religion continues to play a significant role even in places such as Europe with its rampant secularization. How can this role be a positive one?

As expressed in the title of my presentation, I have taken Konrad Adenauer’s famous dictum:

We all live under the same sky, but we do not all have the same horizon.

Yes, my religious conviction is like a horizon that gives my life depth and puts it into perspective. But this horizon is for many people in modernity fragmented and individualized. Therefore, the urgent question remains, “How do we get a common horizon”?

The reason why we do not have a common horizon is because we are living in a time and place influenced by globalization. Globalization means the suppression of time and space. Everything is present everywhere at the same time. It means that everything moves and moves fast: Money, people, information. Everything is in a flux.

But on the other hand, many of the systems and structures that we live by are formed in a more static environment. When the movement caused by globalization meets the static structures, it leads to DISRUPTION. No wonder that people long for something to hold onto.

Here religion comes into play. After the rampant secularization that was observed in the 20th century, that has continued to the present day, religion has made a comeback, but now in a variety of forms. This is the plurality we must endure and live with. Pluralization is the order of the day.

For many this is unbearable. That is why we experience that people have difficulty in coping with the fastmoving public world. And we see a dramatic rise in figures documenting an increase in depression and anxiety.

As a remedy, you seek company with likeminded people. And such groups can form parallel societies, they assemble in ghetto like surroundings and overall loyalty to the greater society is sometimes lacking. Because it is difficult to cope with rampant globalization, people take refuge in the opposite movement, namely localization. People are looking for other ways of organizing their lives, where ideals of self-sufficiency and security are central, because people want to be in control of their own life.

Since this pluralization is likely to continue, it constitutes a threat to homogenous societies. People will look for other ways of organizing their societies. Ethnicity, culture and religion comes again to the fore. But how can these diverse groups live together?

In the past, we had societies that were monoethnic, monocultural and monoreligious. Today, however, we are moving in a direction in which most people are coming to live in societies that are multiethnic, multicultural and multireligious. This calls for new ways of organizing our common society. Two models can be considered:

One is the true multicultural society, where people of different ethnicities, religions and colors live peacefully together. In certain cases, this can function, especially in societies created through immigration, as for instance in the U.S. and Canada. But in other cases, it won´t. States that are created through a common ethnicity, language and culture will continue to uphold such a leading culture. This is the case in Denmark, where we have the cross in the flag, Christ in the passport and a preferential place for Christianity in the basic law.

Such a leading culture is of course still developing and taking in new features; but nevertheless, such countries formed around a leading culture are especially challenged in their encounter with the pluralization and fragmentation we experience today.

For all peacefully to live together, we do not need to agree on everything. And given the need for freedom of expression, it is vital that there is a lively discussion of how we can all live together with our diverse meanings and practices.

But to live peacefully together, it is necessary to identify some common ground. To secure the cohesion of society, there needs to be an agreement on some basic tenets. This common ground must come from the fact that we are all human beings with human needs. Only if such an agreement exists is it possible for traditional societies to assimilate substantial numbers of newcomers.

The two most threatening factors challenging the present societies and their stability are climate change and the demographic changes leading to the enormous global migration we observe today. And we have not found a fruitful way of coping with these challenges. In addition, the gap between the rich and poor is widening, which also threatens the stability of traditional societies and their security.

Therefore, my dream or vision for a sustainable future is inspired by the Danish poet and philosopher N.F.S. Grundtvig, who wrote:

When few have too much and fewer too little

Then we have in richness and wellbeing done right.

In the future development of our societies, we need to work towards economic EQUALITY.

Culturally, we need to work towards HARMONY.

For this to happen, we need a narrative that can foster IDENTITY.

Religion can provide such a narrative that can sustain the individual and contribute to the upholding of the common good in society. In this way, religion can exert a positive influence also on modern democratic societies.

It is all about peace. I will leave you with two quotes. One from our Lord Jesus Christ:

“Peace I leave with you; my peace I give you. I do not give to you as the world gives. Do not let your hearts be troubled and do not be afraid.” (John 14,27)

And as a tribute to the organizers, a quote of Sun Myung Moon from his autobiography: As a Peace-Loving Global Citizen:

“Peace means to connect as one people of different ways of thinking, different races and different languages.”