Multiculturalism- A Contribution to Peace? 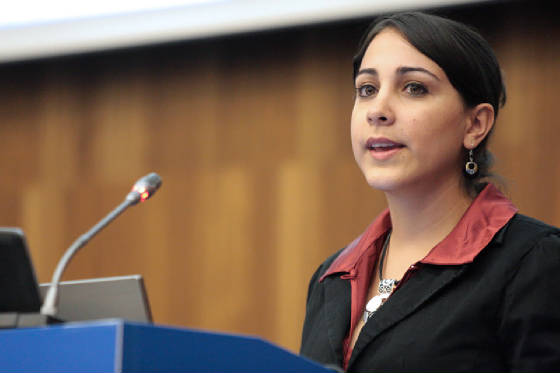 It is a great honor for me to be here today. I would like to talk to you about how my gender and multi-cultural background have shaped my understanding of peace initiatives and helped me cross certain barriers in my personal development.

Our world view and achievements are both limited and defined by not only our personality and motivation or drive, but also our gender, culture and nationality.

The fact of the matter is that relationships are everything. Our ability to relate with other people, not only through interaction, but more so the ability to put ourselves in the shoes of someone else is what makes us adaptable and successful in overcoming challenging situations.

As a an American with Mexican and Iranian parents I had the opportunity to truly learn and understand three cultures that are so different yet so linked to each other. People often ask me with what nationality I identify the most. I like to say that professionally I am American, but socially I am more Mexican and Iranian.  Nevertheless, due to my cultural exposure to these countries and by learning the languages I have been able to work successfully in different projects with not only Americans, but also Latin Americans and Iranians and Afghans. I was fortunate also that my parents gave me a fairly international name: Nicole that can be easily pronounced by most people.

During my college years I took advantage of my multicultural background and experience to teach language classes and interpret for patients at a hospital in Washington DC. I also did humanitarian work with NGOs in Mexico and Iran.  My ability to relate to people from different cultures allowed me to connect to people in a fruitful working relationship.  The best working relationships I had were the ones where, due to a cultural connection I was able to also develop a personal working relationship.

More recently, while working with the US Army in Afghanistan, I was able to put my multicultural background to good use by serving as a bridge between the US Army and Afghan population. Because of my Iranian background and due to the cultural affinity between Iran and Afghanistan,  the Afghans I spoke to and worked with saw me as almost family. In this sense, I was able to gain the trust more rapidly than other members of the armed forces who did not share this cultural understanding or affinity. Even more importantly, as a woman, I gained special access and privileges since I was seen as less threatening in that environment and many locals felt more comfortable expressing their complaints to me than to a man.

Due to these relationships I was able to better understand the Afghan context we operated in. I was also able to develop a project that addressed one of the main grievances of the afghan population in the area we were in: the lack of road compensation. The American-funded road construction had destroyed a lot of private property. After an assessment we were able to implement a project to compensate those who had lost their property. One of our main objectives in this project had been to put an “afghan face” to the project by allowing the district government to take a main role.  After the project was completed I remember I was in the district center and I heard one of the villagers that had been compensated point at one of the district members and say…”that is my representative that made sure I was compensated for damage to my property”. At a later point one of the main district members we had worked with in this project stated that in his opinion the credibility of the district members as true representatives of the people, which up to that point had been severely damaged, had increased by about 80%. In this sense, by understanding the local context, we were able to develop a project that not only addressed the local grievance but also fostered a positive perception of the Afghan government and foreign forces in the area.

While in Afghanistan I also worked closely with French forces. Interestingly enough, just like there are palpable differences between the Afghan and American culture, the European mindset is also in some areas at odds with the American one.  I have French family members and also speak French so in that sense I was able to communicate well with the French to the point that I was frequently the go-between for the Americans and French on the base.

It is true nevertheless, that with the state of international politics, Americans have been very much criticized by the rest of the world. Our European partners have also been specially critical, due to perhaps what can be perceived as a different value system.  In the European Leadership Conference in Vienna in July 2011 I asked one of the panelists how we can reconcile different value systems. His response was that we should focus on what we have in common.  After thinking about this a while, however, I have come to the conclusion that the most important values we have, we actually all share as values.
When we look at the French national motto “LIBERTE EGALITE FRATERNITE” it is hard to imagine that these are not values that everyone desires.  The United States Declaration of Independence also mentions similar values.  I quote: We hold these truths to be self-evident, that all men are created equal, that they are endowed by their Creator with certain unalienable Rights, that among these are Life, Liberty and the pursuit of Happiness.

If we look at the different cultures around the world, and even more so focus on the Arab Spring, it seems that these three values: life, liberty and the pursuit of happiness are universal to the extent that we all view these as positive and desirable.
One of the main focuses of the United States in Afghanistan was to ensure that Afghan women were given these same rights to life liberty and the pursuit of happiness. The Taliban government had imposed a brutal regime severely restricting women’s right as fully participative members of society. Instead, women were hidden from the public eye and treated essentially as second-class citizens. In an almost 180 degree turn, the current Afghan government has now even created a quota for afghan women in the National Assembly. Simultaneously, foreign forces have engaged in an initiative called FEMALE ENGAGEMENT TEAMS.  Essentially, female soldiers and civilians go to the villages in teams to talk to women and understand their perception on politics, economics and the general conflict in Afghanistan.  The end result is that these teams develop projects such as chicken farming and building schools to address the needs and desires of these women. While the female engagements teams have been successful to a certain extent I believe they miss a great point. After 10 years of war, our female engagements have not been as effective in bringing an end to the war. There is a perception that female development (defined mainly as educating and providing health services and economic opportunities to women) can precipitate their support for the end of the war.  The reality is that Afghan culture has given mothers a primordial role in the development of their children, a role that has been lost in many other cultures. In this sense, Afghan mothers have a say in the future wife and also activities of their sons. They have the power to bar their sons from joining the insurgency for example. This is a cultural nuance that has perhaps been less understood by foreign forces.  In this sense, the role of females as mothers is primordial in ending conflicts.

I’d like to end by saying that in such times that we live increased paranoia and distrust of each other, it is important to remember those common values I stated before that I believe unite our different cultures: life, liberty and the pursuit of happiness. With a multi-cultural background I have been able to travel and live in a variety of countries and appreciate the uniqueness of each. While the people I meet may dress differently, speak other languages and eat different food, I have always found fascinating how much we actually have in common. In a sense, therefore, while a multi-cultural background has facilitate my move to different countries and allowed me to relate to different people, I t is also my motivation and personal desire to increase mutual understanding that has allowed me to grow personally and professionally in a globalized world.

Therefore, if we really think about it, different cultures should not be viewed as a barrier to mutual understanding, instead it is our personal will and pre-conceptions of the other that are our greatest enemy. Our mind has been the source for the greatest peaceful initiatives as well as the most brutal wars.  The fact that we are our greatest enemy was highlighted in Pogo’s comic strip in the mid-1900s: “We have met the enemy, and he is us”.

While a multicultural background has in fact allowed me to transverse different cultural borders, the greatest obstacles and borders we create to misunderstanding are in our own mind. An integral part of mutual understanding therefore is not to try to get the other person to see our own point, but try to understand where the other person is coming from within a framework of common humanity we have.

Born in the United States to a Mexican mother and Iranian father, Ms. Heydari graduated from Georgetown University in International Politics with a Certificate in International Development, but has lived, worked and studied in many countries around the world including Sudan, Morocco, Mexico, Egypt, Afghanistan and various European countries. Her professional experience includes working as an analyst for the US Department of Defense with the Coalition Forces in Afghanistan, as a project coordinator for USAID projects in Central America and Africa, in research analysis, conference and workshop coordination, and implementation of community development projects. She is currently pursuing a Master of Advanced International Studies at the Diplomatic Academy in Vienna, Austria.