The diversity of multiculturalism 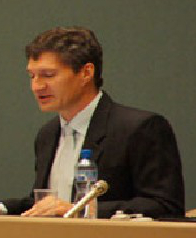 I feel a bit under-qualified to be on this panel because I'm not a former leader of an international organization or a spiritual leader. I'm a development bureaucrat, working with international civil-servants, working for the last 26 years with the UN. (Walter Schwimmer: But you are doing good things underground.) Perhaps I also don't think I'm qualified because we're talking about identity and multiculturalism is the norm for me. I'm Canadian, which is a multicultural society, I have a father who is from Bosnia but who has a German background but who actually grew up in Austria. My mother is English, my wife is Swiss and we've lived in 8 countries.

When my children arrived in Geneva, Lausanne, and I asked them about the first day of school, because they've been moving throughout the world for the past sixteen years, they said, “Well, everything's okay, but everyone's white at the school.” They've been living in Sri Lanka and other environments. So in some sense, multiculturalism is very much the norm, and it has also been the basis on which I've exercised my professional responsibilities because if you go back to the UN charter, 'a new headquarter of millennia development goals', but even going back further, I mean the preamble talks about we, the peoples of the United Nations, determined to reaffirm faith and fundamental human rights, and the dignity and worth of the human person and the equal rights of men and women, nations at large and, for these ends, to practice tolerance and live together with one another as good neighbors, and that's fundamentally the basis for the work I've been trying to do over the last years.

And the reason I said I'm not qualified is because I'm too much of a fan of multiculturalism and interreligious cooperation, but in fact, in the world today, as you have said very eloquently, too often those differences are exploited for the negative effect in terms of people dying, in consequence of development, in terms of the limit it gives on people's opportunities for better lives, whether they be from the south, the north, whether they be men or women.

I thought what might be interesting is to maybe give some personal reflections from the many countries I've worked in on perhaps what can go wrong in terms of intercultural or interreligious cooperation, but also what can go right and how the United Nations can perhaps make it go right more often, and I'll try to be fairly brief on this.

What could go wrong: well, in the introduction, it was referred to that for the last four years until about five months ago I had served as the senior UN's official in Sri Lanka, a fantastic country where I had served in 1984, a country I love and have affection for, a country of wonderful diversity, but a country which has had its progress hampered over the last 30 years at least by an extremely violent conflict which had many dimensions to it, but some of them were intercultural, some of them were interreligious.

But not only there, I had also served in Malaysia for 4 years, also a country that's progressed, but people forget that in Malaysia in 1969-70, things almost fell apart, and there were riots in Kuala-Lumpur triggered by elections, but riots that were on an ethnic basis. I also was fortunate to work in Sudan a long time ago in 1985-6, a country which is just split in two, a country which I think everyone now hopes there's a good future, but the results of that conflict for years, which had an intercultural, interreligious nature to it, were terrible: tens of thousands of lives lost and who knows about the opportunities that millions could have had that were lost. I worked in Bulgaria also as a UN resident coordinator, a country which does have a bright future, which joined the European Union about 5 years ago. And one which, of course, also had a period when all the ethnic, Turkish-Bulgarians had to take ethnic Bulgarian names and many of the Turks had to leave, and that was tremendous pain, tremendous loss to the country.

I worked in Butan, a country which I have a tremendous affection for, but sadly when I worked there, because of all sorts of tensions for various reasons, we had people leave the country who didn't want to, and we've had issues since then which have hampered the development and hampered in many ways a society which embodies some of the best values that we talk about. And too often in these countries I worked in, there were religious leaders who played on and accentuated these differences. And too often, there were political leaders who built their careers on making people identify primarily with their ethnic group, making them identify primarily with their religion rather than making them identify with the country as a whole or with the world as a whole. And in fact, sometimes, leaders misplace their responsibility and force people to identify in the worst way with a narrow identity rather than using that identity for the way it should be used which is to provide with more opportunities. In short, as it was said by the previous two speakers, the way in which ethnic and religious identity has been used in many places I've lived through my career has been frightening.

But in all these places I've lived, there are also very good examples of people using their religious values, people identifying in different ways, people identifying with cooperation. Again, Sri Lanka had been a multicultural, well-functioning society for a long time, and on a day to day basis even during some of the most difficult times, for example in 1983 when there were riots in Columbo based on an ethnic basis, neighbors of one ethnic group would give refuge to other ethnic neighbors at considerable risks to themselves in a very brave way. Even now, more recently, the people who came out of the terrible place they were when they were caught in-between a rebel group who used them as a shield, and a government who was trying to meet its military objectives, when they came out, there were lots of examples of individual kindness and understanding and various attempts by individuals to reach out. We were fortunate in Sri Lanka in a couple ways: in the UN, we had programs which tried to build bridges between young people using sports or using development projects for cooperation. I saw how these worked, and given a chance, people prefer to cooperate given a chance. People prefer to be friends given a chance. People prefer to understand each other if they were given that chance. We tried to reach out to different religions, I was very fortunate to become quite good friends with one of the senior monks in Sri Lanka, who had ties to all parts of society. But I think through those ties we try to build, we also try to make the different religions there understand better the role of the international community and to appreciate the value of inter-ethnic cooperation because, unfortunately, as in many other countries, sometimes, some of the religious leaders were the most radical in pushing forward the differences rather than the unity.

In Bulgaria, as you know, when the communist period ended, and the European state came out that Bulgaria is now, the Turkish minority was included, there often were coalition partners in the government, and I think their rights are protected, and I think that's a credit to the Bulgarians. Everyone knows that Malaysia has some problems but at the same time is probably amongst the most successful of countries in the world in increasing the living standard of its people, and it has been amongst the most successful in promoting foreign investment, and that's been through people trying to find a way to identify and trying to create a national identity. And then, of course, my home country, Canada, I feel most at home actually walking down the streets of Toronto, Vancouver and Montreal: people look like they're from all over the world. You have someone from China, someone from India, and then you have of course second generation/third generation who are a mix of everyone, Asians and Europeans and Carribeans; it's all there. And that actually makes me happy and hopeful to see it.

Now, the question is: “What can the international community do to try to ensure that these better examples are the norm rather than these worst examples that people's natural tendency to be compassionate, to be humane and to understand each other, to have that larger identity is not overwhelmed by people who manage to exploit the differences and to exploit fear?”

I'm not sure there's a complete answer to that, but I do believe that it's one of the key roles of the UN in the broadest sense to create conditions where people have an opportunity to be their best and to prevent those conditions where people unfortunately show their worst, and those conditions often come up when there's gross inequity, when there's poverty, when there's economic frustration and environmental issues. Those conditions come up when there's no communications. So I believe as an international civil servant that perhaps the most important mission that we have is to try to make the world as a whole, create those conditions where people have their own identity, but they have an identity based on the positive values in their religion, and they have an identity which realizes that they're part of a larger, global identity and that they need to respect different cultures and they need to operate and, if they do, their children will have more choices in life, they'll have more capabilities, and a lot of the energy and lives that have been wasted over many years through these exploitations of differences will end, and hopefully we'll have a need for the UN to do different things.

Mr. Buhne holds an M.A. from the Norman Paterson School of International Affairs, Carleton University Ottawa, Canada. Since joining the United Nations 25 years ago, Mr. Buhne worked for many years in various countries in Asia, before serving as Resident Coordinator and UNDP Resident Representative in Bulgaria, Belarus and more recently Sri Lanka, where he served as Resident and Humanitarian Coordinator from 2007 until February 2011, a period which coincided with the violent resolution of the long standing conflict there.