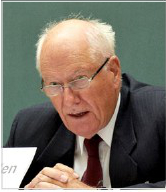 Excellencies, ladies and gentlemen, I agree with everything the distinguished speakers before me have said and on the theme, in its strict sense, I have only two remarks to make.

In the first place, as a European, I think that ultimately we will be a country which needs imported migrant workers, due principally to the greying of our own population, and in that respect, the perspective is not bad.

The second point is that we have to make a distinction between legal migrant workers, asylum seekers and refugees from conflict and war, and we have to treat all these categories in a different manner. And I think that point perhaps has not sufficiently been underlined today.

But today I want to speak to you as a practitioner of foreign and security policy and I would like to discuss with you some alternative models of how the world may look in the future, scenarios for international relations, but also relevant to the relations among the citizens of our respective societies.

These models are in increasing order of attractiveness.

First, the most horrible, I think, is the scenario of fragmentation, in which everybody is thrown back on his own narrow interests, his own clans, his own nations, in which the fabric of society, as a whole, disintegrates.

Then the model of networking; networking in which the State loses most of its significance and networks take over – some technical networks, ICT (Information and Communications Technology), some good, some bad, like Mafia or hecklers and then the question remains. “How will these networks interact with each other?”

The third is the already much discussed multi-polarity. I took Physics in High School and I find the image of more than two poles rather strange but OK. You think about different centres in world politics, but it is more important that these new poles, the so-called BRICs, like Brazil, Russia, India, and China. The BRICs have little cement between themselves and I don’t see many other nations coagulating around them – neither around India, neither around China, perhaps around Brazil, although even there I wonder and Russia seems to be losing its significance.

So the best model, in my view, is the multilateral model, in which we see co-operation with as many countries, as many non-governmental organizations as possible.

And then, of course, the UN is the most universal model, but still it is largely inter-governmental, and reflects the situation after World War 2. Sovereignty of the State is in most situations still paramount. Now, thanks to Secretary General, Kofi Annan, we made some progress in 2005 with the so-called responsibility to protect, which puts the duty of each and every state to protect its population. In the case of Libya, it seems to have worked – protection of the people was the main goal of the resolution of the Security Council, authorizing the use of force to protect the population against Col. Gaddafi’s regime.

And I think the most important thing of that situation was that it was an action which was also supported by other regional organizations.

And that, I think, is the model of the future. Democratic Muslim countries have participated in this process. The revolutions in Tunisia and Egypt were not religiously-fundamentalist inspired. No, they were based on high food prices and lack of jobs. So, as one of the previous speakers said, it was not a clash of civilizations, and I think we should profit from that, and support countries like Egypt and to build a new system of governments after the military rule, support non-governmental organizations, party formation and, of course assist them to find jobs for the young people.

So regional organizations, taking responsibility within their own region, also there has been important the African Union, the League of Arab States, they have supported the international community.

I want to say a special word of appreciation to Asean and the two ambassadors who represent their countries here. I think Asean has built up a record of its own. As a European involved in European integration, I hope they will follow us as a model by also building a rules-based organization, but nevertheless I think they have done a great job already together and also, as a new model, I believe that what Asean has done, in terms of focusing on things you are agree on, Asean is a very good model.

We, in Europe, have a tendency to focus on things we disagree on, and that’s why we have so much discussion and debate about ourselves. Now sometimes, of course, it is necessary. Nevertheless, I believe that the European Union has transformed relations in Europe, they have put in many new context. After the World Wars, nobody thinks of war among Germany and France any more, as my parents did.

So a rules-based organization but, on the other hand, a peculiar animal, the EU. On the one hand, the rule of competition and we organize our competition and we compete. On the other hand, we do want to do things together, so we want to cooperate. Well, that doesn’t always fit easily. Nevertheless I think it is the way forward, and the way forward, I think, on the basis of all we do in Europe are the 4 freedoms, which Pres. Roosevelt developed during the Second World War – the freedom of speech, the freedom of religion, the freedom from fear and the freedom from wars.

I think those are the 4 principles on which we can develop our goals.
I think it is a notion of freedom, for countries and for individuals, which has its own limits. The limit of your freedom is where the freedom of your neighbour starts and I think we have to be aware of that.

And that requires, as many of the speakers before me have said, a degree of tolerance but, also, thanks to our Swiss speaker, I completely agree with, the willingness of the immigrants to follow the rules of the receptive country. Then, we are in the new model of co-operation and tolerance with each other.

During his stint at the Ministry of Foreign Affairs, he was in charge of coordinating European political cooperation. Dr. van Eekelen was Minister of Defence of the Netherlands from 1986 to 1988, during which time he participated in the Eurogroup, which was composed of most European NATO Defence Ministers.

In 1989, Dr. van Eekelen became the Secretary General of the Western European Union (WEU), which legally binds nine European countries in a mutual defence treaty. Through the 1990's the WEU, under Dr. Van Eekelen's guidance, continued to influence post cold war security and political integration. From 1995 to 2003, Dr. van Eekelen was also a member of the Dutch Senate. Dr. van Eekelen has always been an ardent supporter of both Atlantic and European cooperation. He is currently a member of the Advisory Board of The Rights Forum, a foundation dedicated to a just Middle East policy.

Dr. van Eekelen is a UPF Netherlands Ambassador for Peace and serves as a member of the UPF Global Peace Council.