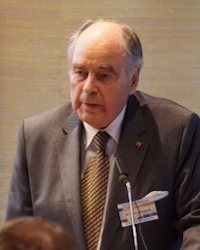 Excerpts from Dr. Claus J. Duisberg’s keynote speech at the International Symposium hosted by the Donghwa Research Institute entitled “30 Years of German Re-Unification and the Vision of a New Unified Korea” held in Berlin on June 21, 2019, translated from the original German by Hildegard Piepenburg. As Head of the Task Force for German Politics in the Chancellery, Dr. Duisberg, a Former German Ambassador, oversaw the practical process of German re-unification.

Since 3 October 1990, Germans in the East and West have been living in one state again after more than forty years of separation, and a liberal constitution applies to all.

We've all gotten used to it, and we find it almost self-evident. People tend to regard historical developments as being without alternatives, to think that it necessarily had to happen as it did. However, German reunification was by no means self-evident. Rather, it was due to an unexpectedly happy constellation, which was used with determination against great resistance.

At the beginning of 1989, hardly anyone expected that such a development would begin before the end of the year, leading to fundamental changes in Germany and Europe, with implications for the whole of world politics. For more than forty years, the border between the two blocs of power in world politics, which were highly armed here like nowhere else, had run right through Germany.

Over the years, the confrontation had lost some of its horrors, because the balance of forces ensured a certain, albeit precarious, stability. That is why no one wanted to seriously jeopardize this stability. In fact, almost everyone had come to terms with the status quo; nobody wanted a change.

By November 1989, the demands for freedom and real democracy had grown louder and more furious. To counter the pressure, the government of the German Democratic Republic (GDR) wanted at least to expand travel options. After the first draft of a still quite restrictive new regulation met with protests, a second one that went much further was mistakenly announced prematurely at a press conference on the evening of 9 November. Amid the rush of thousands of people at the crossing points in Berlin, border police officers opened the barriers with consequences that changed everything.

What happened that night and in the days that followed was irreversible. Former Chancellor Willy Brandt said at the time, "Nothing will be as it once was," giving a most apt expression to a general feeling. Until then, the German question had been open, but not the internal German border. Now that this border was open, the German question no longer could remain open indefinitely.

If, in retrospect, one asks how everything ultimately became possible, one must, on the one hand, mention the quest for freedom and democracy which, in the 1970s and 1980s, more or less affected the entire Eastern Bloc, but which was not triggered but promoted by the Western policy of détente, in particular the CSCE (Conference on Security and Co-operation in Europe) process. In the GDR, people had a direct connection to the West through radio, television and personal contacts; the Federal Republic was constantly in front of them as a liberal alternative. The desire for freedom and democracy alone, however, could not have had any effect, as the violent crushing of the uprising in Hungary in 1956 and the "Prague Spring" in 1967 showed.

On the other hand, the decline of the Eastern leadership would have been added. The reform policy initiated by Mikhail Gorbachev with the aim of strengthening the Soviet empire led to the dissolution of the alliance structures and finally to the disintegration of the Soviet Union itself. The GDR, however, was not a state that was politically and economically viable in itself, but a creature of the Soviet Union; as soon as it was no longer held by the Soviet Union, it had to collapse.

Finally, the third condition was that this constellation was used by the West German Federal Government and that it succeeded in obtaining the support of its allies, especially the USA, through a decisive but at the same time cautious and moderate policy. Former Chancellor Konrad Adenauer had said a year before his death, on 21 March 1966, "I am not giving up hope: one day Soviet Russia will also realize that this separation of Germany and thus of Europe is not to its advantage. We have to be careful, if the moment comes. But if a moment is approaching or seems to be approaching, which brings a favorable opportunity, then we must not leave it unused." It is to the credit of the Federal Government that it has recognized the moment and used it purposefully.

Thus, it was a combination of luck and merit which enabled Germans today to live again in one state and in freedom.

Translated from the original German by Hildegard Piepenburg.