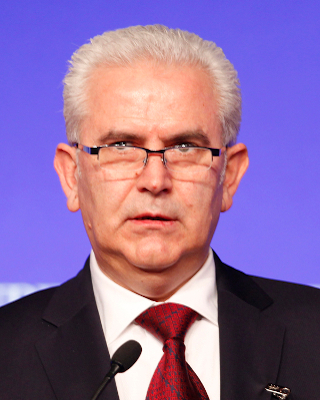 First of all, I would like to thank UPF for organizing this summit on Peace, security and human development in southeast Europe, but also for inviting me to participate. Aware of the fact that peace is interrupted in many places in the world, security threatened and development suspended, and that this condition is present not only in countries previously referred to as third world countries, now known as undeveloped countries, but also since the end of the previous century on the ground of Europe almost continuously, that is the reason enough not only to seriously discuss about it but to act on it.

I come from Bosnia and Herzegovina, state which was created by the dissolution of Yugoslavia and which gained diplomatic recognition by the international community in 1992 – 27 years ago. Our tragedy, the war which followed the recognition destroyed not only human lives, but the economy, infrastructure and human relations in our country as well. Although the war was stopped in 1995. under the patronage of the international community (USA), with the end of military actions, but not with the end of hostilities, our country and its institutions still don’t function in a way they were supposed to according to the peace agreement and in the interests of the general population of Bosnia and Herzegovina.

The absence of timely and effective reaction by international subjects during the dissolution of Yugoslavia enabled the start of war, conflicts and completely wrong measures during the war, which resulted in the genocide confirmed by the verdicts of the ICTC for former Yugoslavia. The role of the UN, EU, NATO and other international associations was wrong, untimely and with the purpose of protecting the interests of the leading countries of those associations and not the people who were caught up in those events. Such relations continued during the moment peace was established and the Constitution of Bosnia and Herzegovina was imposed trough the Dayton peace agreement, which is even today the source of all the controversy and problems in the normal function of the state and its institutions. That constitution contains discriminatory regulations which results in an abundance of discriminatory processes, relations and acts in Bosnia and Herzegovina.

It is not my intention to amnesty every one of us living in Bosnia and Herzegovina from responsibility for current condition in our country by these statements, especially political activists and government officials, not today nor during the military conflicts. Indeed, some passions which were present in some individuals and collectives were used and manipulated to create conflict. Today they are still used as a means of manipulation and, as a result, we have the same political subjects in power who led the politics before, during and after the conflict. I am well aware of the responsibility and guilt of every resident of Bosnia and Herzegovina for this condition and I’m not trying to relativize it. I have been continuously talking about it during my time in politics in Bosnia and Herzegovina, which is why I feel the responsibility to talk about the liability of the international subjects and structures for the current state and relations in Bosnia and Herzegovina, neighboring countries and the region.

Ladies and gentleman, personally I would be a lot happier and content if I could, here in front of you, express completely opposite facts, attitudes and pictures regarding the condition in Bosnia and Herzegovina and the region, and talk about positive trends and development perspectives which would represent a magnet for investors and attract young and educated people from all over the world to my country, but the facts would deny me, like they deny everyone who tries to present a better picture of the condition in Bosnia and Herzegovina, as well as the acts of the international institutions in Bosnia and Herzegovina. Frankly, I am not so sure that I support the further stay and engagement of the international institutions in my country anymore. It is a fact that, for a long period of time, they don’t act in the interests of my country and its population, but primarily they protect the interests of their countries, and the consequences of their actions, or should I say inactions, are causing irreparable damage to Bosnia and Herzegovina and its population.

Gathered here today, we are considering the condition of Southeast Europe, which significantly corresponds to the depicted condition in Bosnia and Herzegovina. To the best of my knowledge, the condition in Kosovo is even more dramatic than in my country. Montenegro didn’t solve their internal problems by joining NATO, rather they only further complicated it. The solution for the name of North Macedonia was too big a price for Zoran Zaev and his political party and, with this, the condition in the country, despite its rapprochement with NATO, is slipping into problems, especially thanks to the hypocrisy of Brussels and the EU administration which didn’t approve the opening of access negotiations for North Macedonia. Serbia generates a state of crisis in the region, because that is the only way to stay in pace with the countries in the region and stop the revolt of its population, who are justifiably discontent with their living standards. Croatia, which believed it had “escaped” the region by joining NATO and the EU, is not mature and strong enough in those institutions to have a positive effect on the processes in the region, and is burdened by its wrong decisions regarding the region from the past. Croatia is not strong and decisive enough to change its wrong politics, nor to eliminate the bearers of those politics.

Convinced that only trough honesty, truth and decisiveness we can achieve something positive, I conclude my thoughts with concern that the entire region could again easily be exposed to new destabilization and destruction, because of the lack of understanding of relations in the region or the interests of global forces. My expectations that we could, with the help of the international community, recover from the destructions of war and set up normal relations once again shortly after war turned into an agony which has lasted for a full 24 years, without any indication of when this agony could stop and the overall development of the region would start. Contrary to my expectations, I am once again afraid that the entire region is on the verge of new turmoil with tragic consequences.

Nevertheless, I still believe that in this region, as well as globally, there are people and organizations like UPF who are determined and reasonable enough and could change the trends and perspective and turn these processes in the right direction. In that name, ladies and gentlemen, I ask all of you present to act in a more resolute manner, in order to create a stable condition which would enable stability and development locally as well as globally.

I will end my presentation with a quote from Ivo Andrić, winner of the Nobel prize for literature from Bosnia and Herzegovina who wrote:

“the course of events in life does not depend on us, at all or very little, but the way we handle those events depends on us a lot. Our reaction determines not only our own fate as individuals, that of our communities, but has a significant impact on future events. In our reactions to these events, we should be bold, just and prompt, in order to change the world and walk toward a better tomorrow.”

Once again, I wish to thank UPF for organizing this summit, and the ability for us to share our experience and cognitions in order to find a solution. One of these solutions is to support people committed to peace, stability and human development, like the people here.