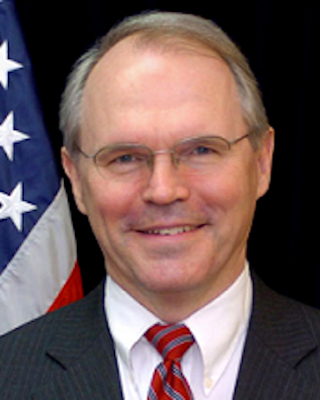 Let me join others and say what a pleasure it is to be at this South East Europe Peace Summit. Peace is something that has been very difficult to achieve. In some ways it’s something that we all dreamed of, but we now understand that it’s not just the absence of war. It represents a kind of structure of relations among people, of how one respects different points of view, what one can do to make a more stable and just world, and a basis, a foundation for prosperity that we all seek for our children and beyond.

It has especially not been easy in the Western Balkans. I came to Albania for the first time in 1991. That’s only 28 years ago, but it seems like a much longer time. There was a system of government such as that of many different countries, where one group thought they had a monopoly on all thoughts and on how humankind should implement just their own interests. We now know that peace is dependent on different people coming together and respecting each other. I think that dedicating oneself to peace, though, offers no refuge to those in need of instant gratification. After all, it takes a long time to form these structures and to systematize this respect for each other. I’ve heard many times in the past and we’ll probably hear it today, that somehow people in the Balkans and in the Western Balkans have been fighting for thousands of years. You often hear that, and surely, they are not going to be able to rise above that. That is clearly demonstratively untrue. People in the Balkans have risen above that. And they have put together a community that I think is envied in many parts of the world which are still unable to put together that sense of community. And now, what we see in the Balkans is their desire to be a part of something even better, a united Europe, a Europe that is whole, free and prosperous. I know, like everybody here, of the recent disappointment that the EU session negotiations will be postponed. I personally worked in this region for many years and feel that disappointment, but I think it’s important for people to understand that while the road forward is clear and continues to be passible, it will have problems, there will be twists and turns and challenges ahead. So the issue is not to celebrate the challenges but rather to understand that the task ahead is overcoming challenges and not be stuck, stymied.

I have a great deal of confidence that this journey, that the people in the Western Balkans have been on and is taking them through very difficult times, will not stop until the objectives are met. I have no doubt that there cannot be a Europe whole and free unless all the countries in the Western Balkans are in it. So I’m very optimistic that this process will continue and I think the best thing for the peoples of the region is to act as if the journey has been completed, as if you were already European Union members. Don’t say we will begin to observe those standards once we are in the EU. Start now and observe those standards now. That’s a mind-set that has worked in terms of NATO. I know that for Albania back in 1991, if I had stood in front of an audience in Albania in 1991 and I had said that you’ll soon be in NATO, I don’t think a lot of people would have believed me; and yet look at the extraordinary progress! How did Albania and North Macedonia do that? The answer is they accepted reformed processes through their military, through their civilians, through a certain mindset that the military achieved, through working with other NATO countries, and I think the fact of the matter is that these countries became NATO members even before they were actually inferred as NATO members. So the task ahead is very clear and it should not be slowed down by any of the challenges ahead. I would ask the people in the Western Balkans, and it is of course the purpose of this meeting, to discuss the challenges here. But I would ask some of our Albanian and North Macedonian friends and others to understand there are people of other parts of the world here, who are also looking for answers and solutions to very challenging problems in their own part of the world.

I used to think when I was in the Balkans that there was nothing more difficult in the world than the problems confronting the Balkans. But that was before I went to Korea and I dealt with the North Korean situation. What happened in Korea is a terrible tragedy. The people had nothing to do with the division of Korea, with the establishment of this very sort of alien political and economic culture that was created in the Northern part of the Korean peninsula. These were all concepts that were frankly introduced by others into the Korean peninsula. So you can imagine the tremendous frustration of the people in Korea, who should have their unification and are historically entitled to it, and yet cannot be unified because of the situation in North Korea. So I would ask the Balkans to understand some of these issues because I want to make sure that as we go forward in this one world of ours, that people are developing a better understanding of what is happening on the other side of this one world. I thought nothing could be worse than the division of the Korean Peninsula, and then I went to Iraq, I was ambassador in Bagdad, and I saw the extraordinary problems there, having governments and a system which had no sense of tolerance for people and where the brutality of these wars was such that it was utterly frightening to the people of Iraq and to their sense of what could possibly be a future, when you have this kind of brutality around you, where hearts have really turned brutal.

So again, I would ask the people in the Balkans to understand that there are others in the Middle East, who have problems that are frankly even worse than some of the problems we’ve encountered in the Balkans. So I think we all need to be inspired not only by our own example, but also by the examples of others who are trying to deal with their very difficult problems. I think an important aspect of diplomacy, and we can call all of us here ambassadors, is to listen to others. That is to spend more time listening than you do talking because when you listen you are absorbing information, knowledge, and creating wisdom. So spend some time listening to other people and try to understand the central point, which is that every country is unique. None can impose its uniqueness on others. But at the same time we need to know that a lot of these problems have happened all over the world and that the problems, and therefore their solutions, are not necessarily unique. So I think it is an excellent opportunity to come together in this historic moment. It would be remiss of me if I were not honest with you to say that we have problems in the US too, a lot. And we will deal with them. And I want people to understand that, as difficult as it has been for us at times, we will find solutions, after we have tried every alternative, but we will get the solutions in our country as well. So ultimately, we all need to understand that we need to depend on ourselves but also need to depend on each other, and understand that together we can do anything we want, provided we stay together and stay focused on our ultimate goal.

Thank you very much and I look forward to further discussion.

(Transcribed from the audio recording)