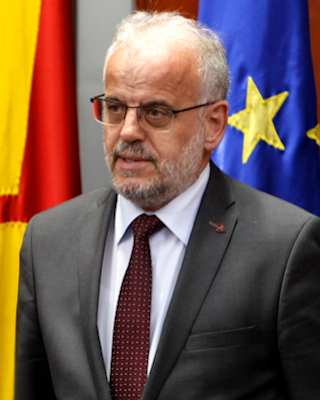 Intervention of H.E. Talat Xhaferi, Speaker of the Parliament, Republic of North Macedonia, at the Southeast Europe Peace Summit in Tirana, Albania, on 26 October 2019.

Honorable vice-president of the parliament of the republic of Albania,

I am honored to be among you today, and on my own behalf, as well as on behalf of the members of the Assembly of the Republic of North Macedonia, I have the opportunity to greet the participants of the Universal Peace Federation Summit, which will generally focus on the topic "Peace, Security and Human Development in Southeast Europe".

The signing of the United Nations charter, the submission and commitment to the principles and goals of international law and justice, and the rule of law based on this international right, is a guarantee for peace and security in the world. Maintaining this peace and providing dignified living conditions is an essential obligation and a right of every human being. Southeast Europe has a turbulent history that leaves no one indifferent. There have always been antagonisms and divisions, it has always been easy to wake up the beasts and get the boilers called the "Balkans" to boil, but it seems that slowly but surely these harmful symptoms are being overcome. Hate speech is being replaced by contemporary vocabulary of civilized and visionary dialogue, thereby creating ample space for the development and advancement of this part of the globe. Because, by putting our hand on our hearts, we have all the prerequisites to establish a healthy and a good environment for all. We just need the sincere will to cooperate and support each other, and thus help ourselves. We need wisdom and foresight; we need the vision of a great, inclusive, wide and non-exclusive picture. As individual countries we are not attractive and interesting, but as a region we can do a lot, and our citizens deserve a lot. Guided by this maxim - that together we are stronger - since the independence of our country we have defined the strategic goals and the path we will take as a country, namely the membership of the European Union and of NATO.

As you know, the Republic of Northern Macedonia has worked and continues to work hard in the area of ​​promoting and strengthening good neighborly relations, because we believe that only a sincere approach to disputes and open issues, and maintaining political dialogue until it is exhausted, in all likelihood, may lead to a compromise acceptable to the parties. The result of this unselfish commitment was the signature of two agreements, namely the Agreement on Friendship, Good Neighborhood and Cooperation with the Republic of Bulgaria and the Agreement with the Republic of Greece, which put behind the long-standing dispute that prevented us from achieving our strategic goals, respectively NATO and EU integration. Now this process has been unlocked and, by the end of the year, we expect to become the 30th full-fledged NATO member. And regarding EU membership, I know you are aware of its fate since the Republic of Albania is living the same fate as we do.

I came here from Strasbourg, where I was participating in the European Conference of the Presidents of the Parliamentary Assembly of the Council of Europe, where, besides my speech at the conference, I also had a meeting with the President of the European Parliament and other MPs. During all the conversations that took place in a sincere and friendly atmosphere, it was repeatedly said by everyone that support for our European Integration continues, admitting that we have been wronged; nevertheless we must not lose hope and must pursue the same way of fulfilling the criteria, i.e. by making reforms. I said that despair is natural to everyone, but that any eventual alternative to the accession process, namely putting our country in the category of EU good neighborhood, is not acceptable to us, and I emphasized that the Berlin Process is complementary to the process of European Integration through which the Western Balkan countries can achieve accelerated reform progress. And we are seriously committed to the process in the interest of faster integration into the European Union. Proof of our two countries' support is also the resolution that was adopted in the parliament by an overwhelming majority that recognized all the efforts and reforms we have made. Of course, our activities will not end here, and we will continue at the same pace as this is useful to the development and progress of our countries, to the safety and well-being of our citizens and to a better quality of life for all. We will continue to build bridges of cooperation and harmonious relations between our people, our countries, and the entire region and the world. We will continue with joint projects to compete with the developed world in technological, ecological, cultural, scientific, intellectual, artistic and other areas, because we have the human potential, the willpower and the foresight to become exemplary.