Excerpt of Intervention of H.E. Archbishop Ivan Jurkowich at the International Day of Families Commemoration

Details
Written by H.E. Archbishop Ivan Jurkowich, head of the mission of the Holy See to the United Nations in Geneva
14 May 2019 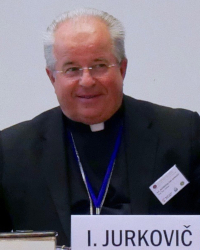 The Catholic Perspective on what the human family is in today’s society.

Excerpt of Intervention of H.E. Archbishop Ivan Jurkowich, head of the mission of the Holy See to the United Nations in Geneva, at the commemoration of the International Day of Families in Geneva, Switzerland, on 14 May 2019.

The family remains always the cell of society and the primary place of education. It is the community of love and of life, in which every person learns to relate to others and with the world. By the way of the human qualities developed and acquired in the family, the person is able to project himself into society, to frequent positively other formative environments such as school, marriage and community.

Due to the rapid social and demographic transformation that have affected society and culture in recent years, the family and its fundamental role in peaceful civilisation finds itself increasingly challenged. In spite of today’s social difficulties, however, many families continue to remarkably witness to those values that constitute the foundation of the institution of the family, and they are the bond of the true fraternity that is so much needed in today’s world.

Our daily experience on the other hand shows that families may also encounter harsh difficulties and be tempted by discouragement. In the wake of financial and economic crises, for example, many families were left empty and are now struggling to overcome poverty and to provide adequately for the young and old family members, in order to maintain the integrational bonds that sustained them in the past. It is though in this situation of adversity that family values appear even more critical.

The lack of family ties and solidarity nourished by altruism and forgiveness may bring about dramatic situations. As family ties break down, millions of children and youths are left without the proper and necessary guidance, and are increasingly exposed to risks, such as dropping out of school, forced labour and sexual exploitation.

Additionally, in recent years, the family has also been subjected to numerous forces that seek in some way to deform it, following a secular view of reality which entails a faulty notion of freedom, considered as an autonomous power of self-affirmation for or against others for one’s own selfish well-being. In light of these challenges, as you probably all know, the Synod of the Family, which is a meeting in the Catholic Church on singular topics from time to time, that was convened in 2014 and 2015, sent a clear message on the centrality of the institution of the family.

The family, in fact, is truly the school of humanity which is much needed today. In the family, a person learns endurance, the joy of work, fraternal love, generosity and forgiving others, and above all the offering of one’s life in the service of others. In spite of the various signs of the crisis of the family in the global village, the working document of the Synod states that the desire to marry and form a family still remains vibrant and serves as the basis of the church’s need to proclaim untiringly and with profound conviction the gospel of the family.

See the videos of the opening session below for the complete intervention of H.E. Archbishop Ivan Jurkowich.