Tirana, Albania—Participants from over 50 nations attended the Southeast Europe Peace Summit organized by UPF. The summit, held from October 25 to 27, 2019, featured a wide range of activities, which were introduced to the media at a press conference on October 25 by former Albanian president H.E. Alfred Moisiu, former US Ambassador to the Balkans Christopher Hill and Summit Secretary General Gani Rroshi.

Three main events were held at the large, 3,000-seat Tirana Congress Hall. On the morning of October 26, the Opening Plenary was attended by the founder of the Universal Peace Federation, Dr Hak Ja Han Moon, the president of North Macedonia, H.E. Stevo Pendarovski; the president of Kosovo, H.E. Hashim Thaçi; the Albanian minister of relations with the Parliament, Hon .Elisa Spiropali; the president of the North Macedonian National Assembly, Hon. Talat Xhaferi; the Deputy Speaker of the Albanian Parliament, Hon. Vasilika Hysi; the prime minister elect of Kosovo, Hon. Albin Kurti; as well as ten former heads of state and government, Ambassador Christopher Hill, and key political and religious figures from the region. 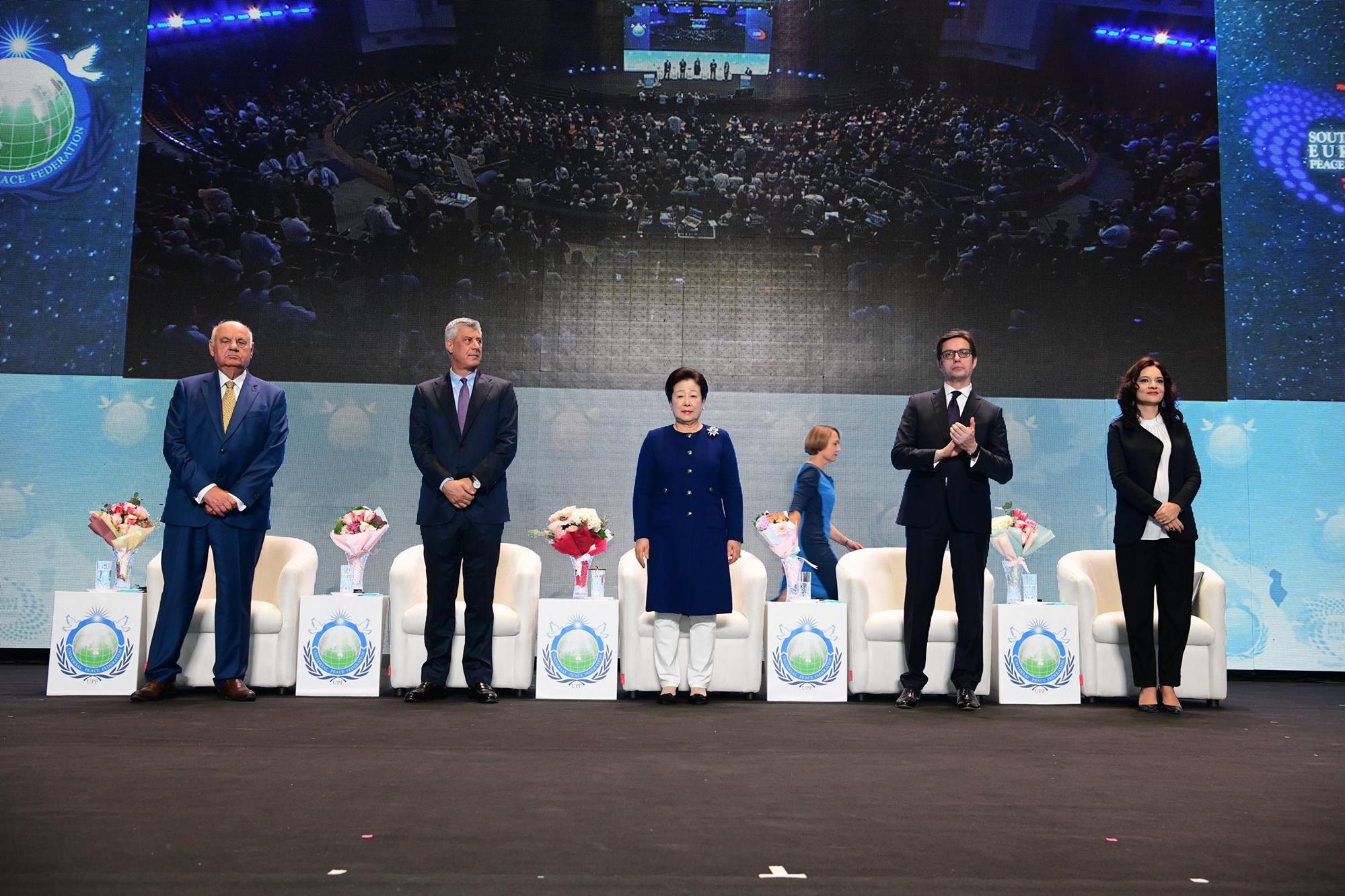 On the afternoon of October 26, a rally of Youth and Students for Peace, an organization that is affiliated with UPF, drew more than 2,000 young participants to attend cultural performances and discuss peace projects. On the afternoon of the next day, October 27, the summit concluded in the Tirana Congress Hall with a standing-room-only Family Blessing Festival.

On the morning of October 27, the Groundbreaking Ceremony for the new regional headquarters of UPF was held in the presence of Tirana Vice Mayor Anisa Ruseti.

The Summit was attended by more than 70 current and former parliamentarians and government ministers, including Dr. Enver Hoxhaj, the deputy prime minister of Kosovo; H.E. Skender Reçica, the Kosovan minister of labor and social welfare; and H.E. May Chidiac, the minister of state for administrative development of Lebanon.

The Albanian religious community was represented by Mr. Bujar Spajiu, the leader of the Muslim Community; Father Edmond Brahimaj, the world leader of the World Bektashi Order; Mrs. Nikki Doçi, representing the Albanian Evangelical Alliance; as well as Dr. Genti Kruja, the secretary general of the Interreligious Council of Albania. Other religious figures came from throughout Europe and the Middle East. The African continent was represented by Sheikh Mansour Diouf from Senegal, the co-chair for Africa of the Interreligious Association for Peace and Development, a UPF initiative.

Fifteen major organizations were official partners of the summit, including the Municipality of Tirana; the Podgorica Club of former heads of state and government of the Balkan region; the Ukrainian Peace Council; the World Bektashi Order; the University of Tirana; and other academic and business organizations. UPF affiliate organizations included The Washington Times Foundation, Women’s Federation for World Peace (WFWP) and Professors World Peace Academy (PWPA).

The summit’s organizing committee was co-chaired by Dr. Katsumi Otsuka, the chair of UPF for Europe and the Middle East; H.E. Alfred Moisiu, a former president of Albania (2002-2007); and Father Edmond Brahimaj, the world leader of the Bektashi Order.

The Peace Summit was a significant gathering for leaders in the Balkans. Political conflicts in the region are intense, within nations such as Albania, or between nations such as Kosovo and Serbia. Relations with the European Union are at a point of tension: A few days before the event, Albania and North Macedonia were denied the long-expected agreement to begin the accession process into the EU, which created great political turmoil in the two countries. The issue was addressed by each of the key political figures who spoke at the Opening Plenary, drawing great attention from the media.

The Opening Plenary began with a series of speeches on the theme “Perspectives for Peace in the Balkans,” moderated by Albanian Deputy Speaker Hon. Vasilika Hysi. The president of the North Macedonian National Assembly, Hon. Talat Xhaferi, initiated the session, followed by Hon. Albin Kurti, the recent election winner and future prime minister of Kosovo, and by Ambassador Christopher Hill, who served as US ambassador in the Balkans during the 1990s and who was the main American diplomat in Albania at the end of the communist era.

The launch of the International Summit Council for Peace (ISCP), a UPF initiative, began with a speech by Hon. Elisa Spiropali, the Albanian minister of relations with the Parliament, given on behalf of Prime Minister Edi Rama under whose patronage the summit was convened. She was followed by H.E. Stevo Pendarovski, the president of North Macedonia, and by H.E. Hashim Thaçi, president of Kosovo. Former Albanian President Alfred Moisiu gave his remarks as co-chair of the summit before introducing the UPF co-founder Dr. Hak Ja Han Moon.

Dr. Moon said that she envisioned a bright future for Albania and for the Balkans. Pointing to the historical role of peninsulas as cradles of civilization, she compared the Balkan Peninsula with the Korean Peninsula and expressed her conviction that the Balkan nations had come to a time of opportunity. Instead of lamenting the rejection by the EU, she said, if Albania and the Balkan nations focus on strengthening their base with strong families and spiritual values, they will become a transforming power for Europe. Quoting the Bible and drawing great applause from the audience, she concluded that although Albania was considered last in Europe after a long history of suffering, the time had come for the last to become the first. 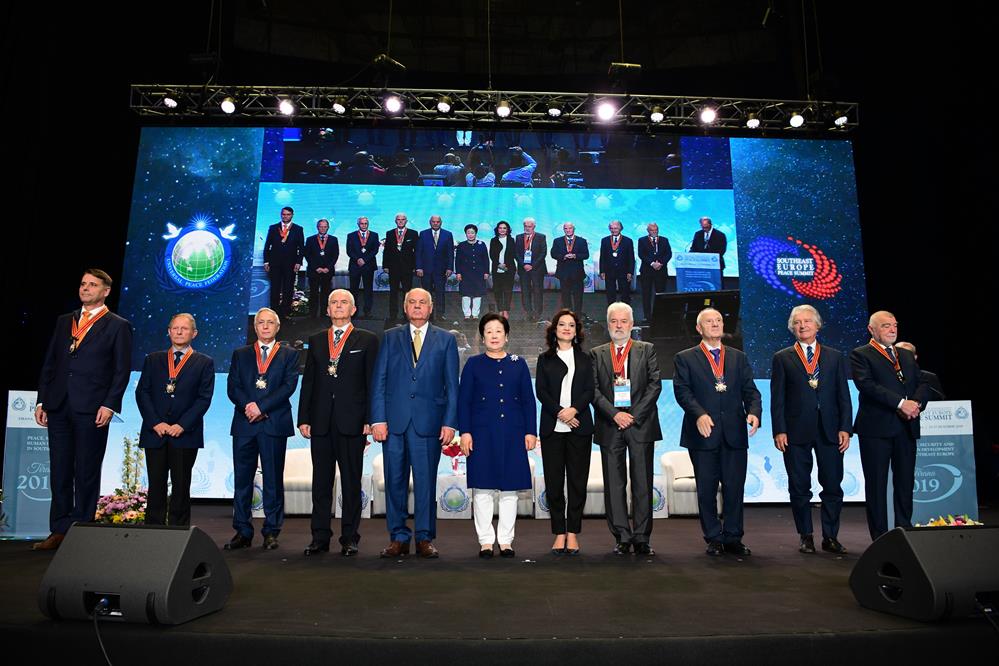 The signing of the ISCP Declaration was done at the luncheon that followed the Opening Plenary, chaired by President Alfred Moisiu and Dr. Thomas Walsh, chair of UPF International.

That afternoon and the next morning, ten summit sessions were held at the Tirana International Hotel, well attended by around 400 participants. They dealt with six areas of focus recently launched by UPF: the International Summit Council for Peace (ISCP) for heads of state and government; the International Association of Parliamentarians for Peace (IAPP); the Interreligious Association for Peace and Development (IAPD); and peacebuilding initiatives for the media, academics and business leaders. Other sessions addressed the themes of migration, education for peace, interfaith activities, and the role of women in peace and reconciliation.

A Global Women’s Peace Leadership Banquet for 150 participants was organized on the evening of October 26 by WFWP, while at the same time a dinner for interfaith leaders was hosted by Father Edmond Brahimaj.

Many participants testified to the quality of the panelists and the relevance of panel discussions. At the Closing Plenary, a full-room audience listened to insightful reflections on “Peace Perspectives in Southeast Europe” by two distinguished speakers: Austrian Minister of Defense Dr. Werner Fasslabend (1990-2000) and H.E. President Bujar Nishani of Albania (2012-2017). Dr. Michael Balcomb, head of Family Federation for World Peace and Unification (FFWPU) for Europe and the Middle East, concluded by explaining the UPF founders’ perspective for the development of ISCP in the Balkans and the greater region.

A high point of the summit was the Family Blessing Festival, held at the Tirana Congress Hall on the afternoon of October 27. Representing all the regions of Albania and the 61 UPF Local Peace Councils created since 2018 in each of Albania’s municipalities, 1,200 Albanian couples participated in a marriage rededication ceremony officiated by Dr. Hak Ja Han Moon, under the watch of a full audience and live coverage by TV cameras.

Affirming the importance of the family as the cornerstone of a peaceful and stable society is at the core of UPF’s vision and activities. This was also the congratulatory message given by Mrs. Monika Kryemadhi, the wife of Albanian President Ilir Meta, a well-known political figure and party leader in her own right. 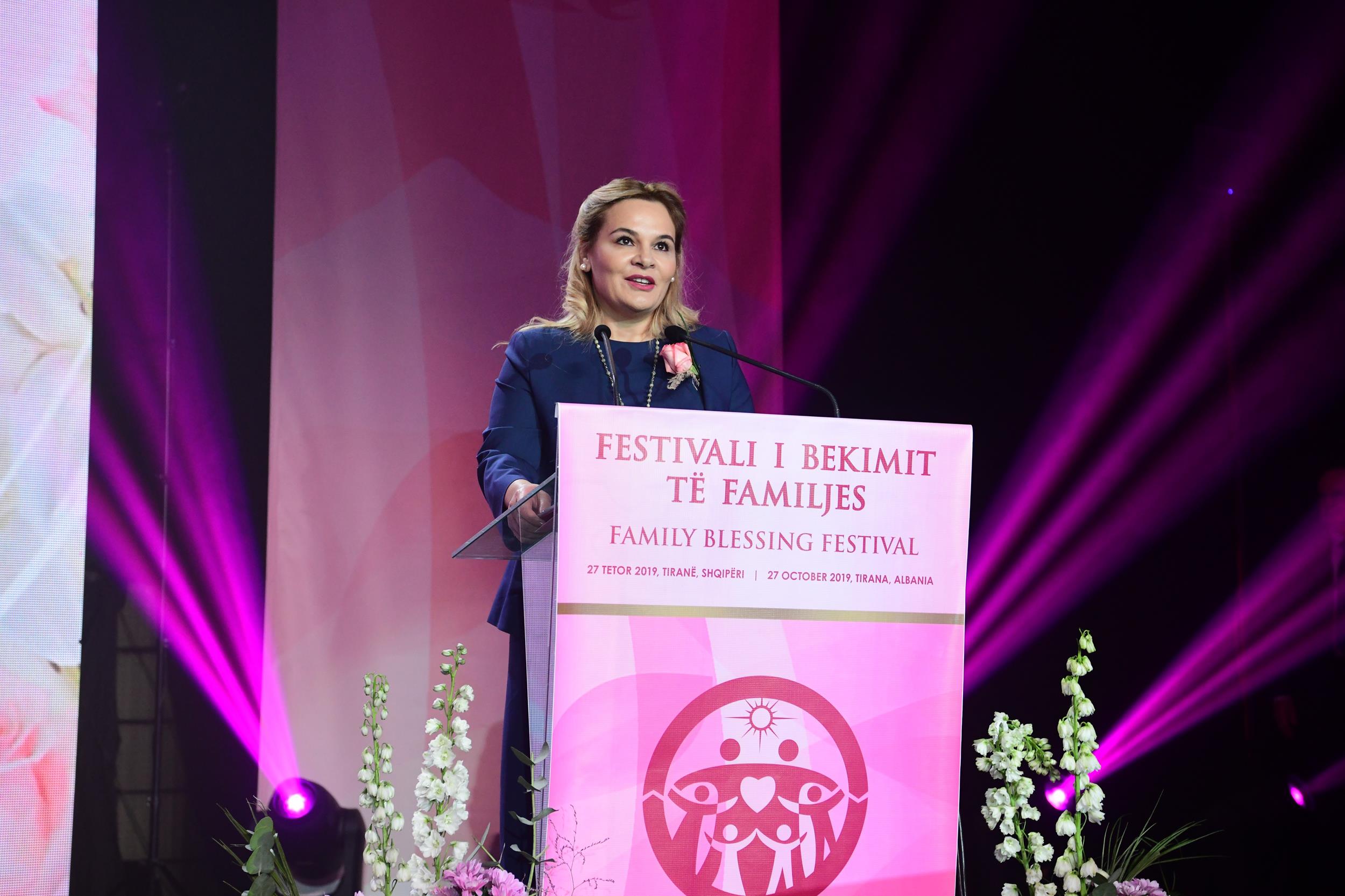 After traditional dances and songs by young performers and famous Albanian singers, Dr. Moon spoke again to the audience about the importance of strengthening the cohesion of society by promoting family values.

She asked President Alfred Moisiu to lead the Steering Committee of the International Summit Council for Peace in the region, offering publicly her support for this initiative. She then offered a donation to three charities in Albania: the Mother Teresa Foundation, a children’s charity, and the World Bektashi Order.

The summit concluded with a closing dinner and a few reflections and songs from the audience. For many participants, this was a milestone event at which representatives of different faiths, political affiliations, nationalities—sometimes enemy nations—came together centering on an inclusive vision for peace, which could take root and expand in the Balkan region.