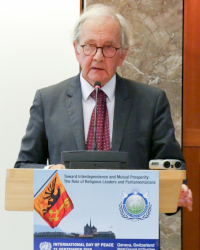 On June 25, 2018, representatives of the six major world religions gathered at the UN headquarters in Geneva and adopted a declaration. The gathering was under the patronage of Prince El Hassan bin Talal of the Hashemite kings of Jordan. I was invited as well. The event is of great importance not only because, for the first time, high-ranking representatives of the respective religions gathered together in the UN Forum, but especially because they signed a joint declaration to the attention of the UN General Assembly. It states that religions are committed to a "recognition and understanding of the universal values of the concept of equal citizens’ rights, which are rooted in human rights ". Secondly, it wants to reinforce "the promotion and the strengthening of equal citizens’ rights, which include economic, social and cultural rights as well as civil and political rights". Third, the assembly makes the commitment to hold an audit under the auspices of the United Nations every five years.

I find this process very remarkable and not to be underestimated. For years, if not decades, religious leaders and theologians have sought to establish a common reference point for human rights' political and social engagement in this world: for their recognition and promotion. The basic idea was to globally agree on the universal values ​​of justice, freedom and solidarity - enshrined in human rights - regardless of religious beliefs. This concept was mainly supported and promoted by the Catholic Church since the Second Vatican Council, but also by the reformed churches, especially as, having a natural law tradition, they had little problem integrating universal, broadly human and sound values. However, this yearlong attempt to reach an agreement failed. And it seems to me, for the following reasons:

First of all, it should be noted that religions have a great affinity for human rights. It is not by chance that the human rights tradition greatly refers to religion. In the 1776 US Declaration of Independence, the Creator God guarantees human equality. In the Declaration of Human Rights and the Civil Rights of the French Revolution of 1789, the concept of "sacred" appears: inalienable, sacred human right. This is no coincidence: they are concerned with the fundamental questions of being human, which have always been at the core of religion. Many central concepts of human rights such as - human dignity, freedom, and justice - are well established in religious traditions. The Jewish-Christian tradition finds, in the discourse on human dignity, echoes in the biblical statement that man is created in the image and likeness of God, that is, in his dignity, he reaches so to speak a quasi-divine rank, which is awarded to all people. Similar motives can be found in Islam, even if they are more restrained. Analogous to the image of God, the Qur'an recognizes man as an outstanding governor on earth ("khalifat", see Surah 2, 30). These are just a few examples. There are abundant possibilities for making meaningful references from religions to human rights. And, of course, the idea was obvious - and it was also long believed - that it was possible to even create a normative, substantive concordance between religions and human rights. But this proved to be a squaring of the circle.

First of all, there is a fundamental caution: the opinion is expressed in different forms that human rights manifest an anthropocentric ideology in which man is elevated to the measure of all things. The ultimate authority would therefore no longer be the divine law, but the common will of the people, and it would also be necessary to measure "religious values". But I think that one can resolve this contradiction: one can certainly grant the revealed Scriptures of different traditions a higher dignity, without having to question the claim to the validity of human rights. But this is not the topic here.

Of course, we observe the failure to create a reference point in human rights in particularly sensitive subject areas: The conflict is predominantly evident in the field of gender relations. This is especially true when it comes to the demand for equal rights of men and women, in the case of sexual minorities. It is obvious that the protection against gender discrimination and the protection of gender orientation demanded by the UN since 2011 has not only encountered great skepticism.

Another stumbling block is religious freedom. This may come as a surprise, since it concerns the most fundamental issue of the religious communities. But the core that provokes resistance lies in the fact that the human right of religious freedom guarantees for external dissidents the right to exist and the ability to develop, and internally secures divergent communities. It is all the more difficult to accept this when an exclusive claim to truth is espoused. An inclusive claim to truth (as represented, for example, by the Catholic Church since the 1960s) can well recognize different ways of salvation or beliefs. A test case for religious freedom has always been the right to change one’s faith, to leave one’s religious community, or to undergo reorientation. Here, so to speak, the freedom pathos accumulates, since even the innermost, final and most intimate orientation is entrusted to the individual for free decision. Here, the opinions are still divided: for some, the right to change faith is a provocation in which the modern age manifests itself in the fact that it can, once again, dispose of God; for the others, it is a question of conscience, which, after all, should also be understood as a gift of God. Here the differences seem insurmountable at this point.

In order to move forward despite the deadlock in the relationship between human rights and religions, the "World Conference of Religions" of last June issued a new common point of reference, citizens’ rights, after the agreement on a common global ethic also seems to be stalled. This ethics enounced by the World Parliament of Religions in Chicago in 1993 stipulated basic moral rules. With the current agreement, one agrees on a legal political (not moral) form, which corresponds to the basic universal human rights claim: "That religious and secular institutions ... pool their means of action in order to channel the collective energy of all religions, beliefs and value systems aimed at promoting the equality of citizens' rights". This remarkable process can be interpreted in different ways. Some may see a capitulation to the discerning discourse on human rights, which joins in the chorus of those currently powerful, mainly occidental, voices that already relativize and undermine the human rights ethos anyway. The others may see in it an important step that religions in general create a common, political and moral platform, albeit considerably less sophisticated in their claim. I confess that I belong to the second group; but some aspects and requirements must be clarified.

The human rights declaration of the French Revolution of 1789 speaks in the same sense of “droits humains” and “droits citoyens”. Today, we can no longer assume that this equality of rights is correct. By definition, human rights are universal, regardless of nation, culture and race. However, the citizens’ rights, which are expressly mentioned in the constitution, only concern the citizens subject to this constitution, but not for example immigrants, asylum seekers, non-believers. Citizens’ rights are part of the fundamental rights, which require a higher degree of commitment. One can make restrictions on civil rights, but not on human rights. The Cairo Declaration on Human Rights in Islam, published in 1990 by the Organization of the Islamic Conference, the most widely used internationally, speaks of "equality of fundamental human dignity and equality of fundamental rights and duties" (Art.1). This must be interpreted as meaning that human rights linked to human dignity can be granted only insofar as they do not violate religious duties and regulations. For example, freedom of expression applies only as far as it does not harm the reputation of the religious community (umma). The requirement of equality between man and woman is stretched insofar as men have more duties and therefore more rights. Of course, the terms "citizenship" and "citizens’ rights" have a completely different sound in the Islamic tradition than in the European (Christian) legal tradition. The Declaration of Al-Azhar of March 2017 states: "The term citizenship is an original term in Islam, it was first foreseen in the" Constitution of Medina ". The practice that was planned did not contain any evidence of discrimination or exclusion of any group of the society at that time. But it included policies that respected religious, ethnic and social diversity. In the same declaration - which by the way is also supported by Christians of the East – there is an urge to renew this early tradition of Islam, also with regard to internal reform. Here lies the key to understanding the process that favors the discussion of citizens’ rights in the document of the World Conference of Religions.

The World Conference of Religions (2018) presents a multi-layered document. Not only are different legal traditions - eastern and western - linked, but different traditions of commitment are interwoven: on the one hand, the discourse on citizens’ rights; they should be rooted in human rights; on the other hand, religiously founded values ​​(such as dignity, equality, freedom, love) are mentioned, for which there is great convergence in religions; they should exert a strong regulatory power on the practice and organization of the national community.

The declaration builds, so to speak, a dynamic triangle: citizens’ rights, human rights, and universal values. The relationship is unspecified. But this triangle gets out of joint when a corner is favored. Precisely because the relationship between these three levels is not exactly defined, it opens up new dynamics in the dialogue between religion and politics. It’s a new beginning. The outcome of this discussion is of course open. However, the central point is that the concept of human dignity ultimately defines every legal category that concerns humans: human rights and fundamental rights such as citizens’ rights. The religious convergence documents repeatedly point out that human dignity finds a very special resonance in religions: that means the outstanding position of man as the subject of responsibility, and in a certain sense, also as the divine partner.

The idea of ​​human dignity must guide the productive engagement of religions with the human rights and traditions of citizenship. The "regulative idea" of human dignity may help to avoid false alternatives like that of exclusive citizens’ rights, but also deceptive relativization of human rights in the name of cultural contingency.