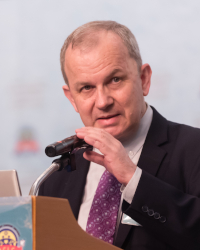 I am not a specialist in human rights, unlike my colleagues on the panel, so I’d like to share with you some reflections on Rights and Responsibility based on the vision for peace of the Universal Peace Federation, which I represent

This topic is at the heart of many problems we face in Europe, including the chaos and violence we see in France today.

Let me start by referring to a meaningful speech on the future of Europe that Pope Francis gave four years ago, here in Strasbourg, to members of the European Parliament.

“Today there is a tendency to claim ever broader individual rights … without regard for those of others and the common good of society …In fact, unless the rights of each individual are harmoniously ordered to the greater good, those rights will end up being considered limitless and will become a source of conflicts and violence.”

Pope Francis refers to this essential balance, and implies that Europe has been losing the spiritual dimension of it:

“At the heart of this ambitious political project [the European Union] was confidence in man, not so much as a citizen or an economic agent, but in men and women as persons endowed with transcendent dignity.”

And he concludes that the future of Europe depends on the recovery of the vital connection between these two elements, the vertical and the horizontal dimensions.

I think that the Pope is addressing a very profound issue regarding human rights in Europe and around the world: the need to give spiritual values their proper place in society and to restore a proper balance between what we may call the “mind” and the “body” of society – that is, between its religious or spiritual dimension, and its political dimension.

This is the motivation behind two projects that UPF has launched throughout the world since 2016: The International Association of Parliamentarians for Peace (IAPP), a network of parliamentarians working beyond nationality, religion and political affiliation - and the Interreligious Association for Peace and Development (IAPD), an interfaith organization built on the foundation of years of interreligious dialogue activities. Both organizations are called to collaborate as “body” and “mind” in search of lasting solutions to the critical problems of our time.

That is also the meaning of one of UPF’s founding projects, which is to empower the United Nations with an Interreligious Council, for more efficient peacebuilding.

This project was proposed by our Founders in a speech at the UN in 2000 and introduced as a project for UN renewal by the government of The Philippines. Such a council would be composed of leaders in the realms of religion or of education, able to transcend their specific beliefs and dogmas to be the voice of universal values and principles. Obviously, it would play an important role to protect human rights in our multicultural society.

We see with interest a similar concern with the European Parliament’s “Dialogue with religious and non-confessional organizations”, as for example the recent seminar on “Religion and Human Rights” last week in Brussels.

Now, everyone knows that religious leaders and institutions have had and still have a share in creating conflicts around the world, pretending to be the exclusive path to salvation and putting forth their dogmas as absolute truth.

According to our vision of interfaith, however, in our multicultural environment, religions have no other way but going to the root of their scriptures and founders’ teachings, and focusing on their common, core values and principles that move the universe.

To put it briefly, whether they are called love, mercy or compassion, these values are founded on one fundamental principle: living for the sake of others while maintaining the self; giving priority to others while fulfilling one’s most deep-seated desires.

The foundation to balance our concern for others and concern for the self is a mature heart, and a primary place for the education of heart is the family, where we go through four realms of human development – the heart of a child, the heart of siblings, the conjugal heart and finally the parental heart, which is the most mature expression of altruistic love.

In a healthy home, this process is a training from self-centeredness to selflessness where, centering on heart, we learn to balance the private and public purposes, the claim for rights and the sense of responsibility.

To illustrate this point, here is a quote from Mahatma Gandhi, who was responding to a question on the issue of Rights and Duties from the Director of UNESCO in 1947, the year preceding the Declaration of Human Rights:

« From my ignorant and wise mother, I learned that the rights that can be deserved and preserved come from well-done duty. In such a way that we are only deserving of the right to life when we fulfill the duty of citizens of the world. With this fundamental statement it may be easy to define the duties of men and women and relate all rights with some corresponding duty to be fulfilled. »

Strengthening the family is crucial for the future of human rights. And because family values transcend cultures, they can play a key role for social cohesion in today’s multicultural societies.

Finally, there is another peace icon whom I would like to quote, and he is from Africa.

Two weeks ago, UPF organized the Africa Summit to honour the legacy of Nelson Mandela on his centennial year, together with his grandson Chief Mandela, who is a member of the South African Parliament. It was held in Cape Town and attended by 700 dignitaries from all over the continent. Here is a quote from Mandela which we displayed during the Summit:

« The truth is that we are not yet free, we have merely achieved the freedom to be free, the right not to be oppressed. For to be free is not merely to cast off one’s chains, but to live in a way that respects and enhances the freedom of others ».

This man had suffered many years under the most monstrous human rights - denying regime, namely, apartheid, yet he came out with an extraordinary maturity of heart and showed the world a lesson of humanity and responsibility. This is also based on the African view of humanity called “Ubuntu”, which emphasizes that we are not isolated individuals in the world but belong to a greater whole.

As we celebrate 70 years of the Declaration of Human Rights, we Europeans may have some lessons to take from those peacemakers who stood on strong spiritual and moral principles.

Let me close with a current project through which our organization is supporting human rights in Africa. UPF Founder Dr Hak Ja Hak Moon created an important Peace Prize, the Sunhak Peace Prize, to honor people who dedicated their life to the protection of human rights, conflict reconciliation or ecological conservation. The one-million-dollar prize is awarded every two years.

In 2017 the laureates were two remarkable people who dedicated their whole life for the sake of refugees in Afghanistan and victims of war in Africa – Afghan educator Dr Sakeena Yacoobi and Italian surgeon Dr Gino Strada.

The Sunhak Peace Prize 2019 laureates were announced at the Cape Town Africa Summit. Both are Africans: Waris Dirie, a Somali-born activist who led the fight against the practice of female genital mutilation. And Dr. Akinwumi Adesina, a Nigerian economist, currently the head of the African Bank for Development, who has taken on Africa’s food crisis by supporting small farmers.

The Prize will be awarded next February, at the UPF World Summit 2019 in Korea.