Our cultural inheritance, a common basis for peace and stability in the Balkans 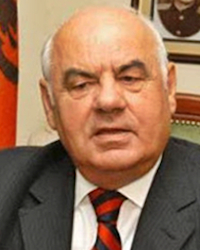 I greet with joy this initiative of UPF to organize this conference aiming at the Balkans and their respective parliaments, so that they may engage in more substantial ways to promote and empower their peaceful efforts among the people of our region.

It is well-known that the history of the Balkans has been troubled. The past times have left heavy marks in the relations between the peoples living in this peninsula. This peninsula has been continually coveted for its geostrategic position, as in the case of the nomadic people that later settled in the region, as well as an important pathway for most important empires of human history. As such, this area has been not only a pathway, but also a battlefield for the Romans, Byzantines, Ottomans, Austro-Hungarians, etc. It has been a battlefield for the First and the Second World Wars. Numerous ethnic, religious and ideological wars have been fought in the Balkans and, as a consequence, much blood has been shed, leaving behind destruction and reciprocal hatred. Ironically, the fiercest and bloodiest wars after the Second World War in Europe happened in this same region. As if not enough blood was shed and crimes committed in the past, these wars added even more to the hatred between the peoples of our nations.

Unfortunately, the political leaders and ideologists of some countries in the region have been continuously distinguished by their nationalist and expansionist theories and practices. They have been raised and fed with the theories of dominance over others and, as a result, have preferred encouraging conflicts and wars to solve issues and achieving their own political, party and tribal ambitions.

The region has tried numerous systems of state governance, mainly monarchies and dictatorships, but not at all real democracy. Not only this, but from time to time there were incitements to conflicts of a religious nature, because the religious prelates thought more about how to dominate larger areas than how to secure peace among the people, with is ultimately their main mission given to them by God.

I presented this short summary of the historical past to show that the roots of the situations we know today are not as shallow as one might think; consequently, they are not easy to eradicate and eliminate. It should be openly said that peace, so much desired and welcomed by the common people, has not always had the right engagement by the local leaders, or “the servants of God”. Each has been looking for and doing his best to increase his domain, with the sole objective of maximizing his power and securing undeserved wealth, despite the resulting pain and human loss.

It is well-known that wickedness with such deep-seated roots is difficult to eradicate if there is no organized and directed effort for this purpose. This absolutely needs continuous actions, persistence and sincere will. Such a situation does not accept the irony or hypocrisy much used in politics.

Besides the above-mentioned issues, we the Balkan people have many things in common in terms of our traditions and culture, just as we naturally have our differences. Therefore, in order to have positive developments among ourselves, we should find and nourish exactly what we have in common. Meanwhile, it has happened on previous occasions that we have fought together against common evils, as in the case of the Second World War. This means that when the need arises, we know how to overcome our differences and contradictions. And this is primarily achieved by the tendencies and directions that are given by the political leaders of the time. This means that the people themselves should be more careful when selecting them, but also that the international bodies and governments that have a great deal of influence over these countries should be more careful in their judgment and decisions.

To illustrate such phenomena, I will cite a famous example. Sport is one of the possible activities that bring people closer together, but this requires attention, since sometimes the opposite occurs. It is a shame that the respective sport and governmental bodies sometimes do not pay proper attention to this issue, because during sport events there is a manifestation of negative actions and gestures that aggravate the relations between nations. When Albanian teams visit neighboring countries, we see and hear slogans and banners calling for “Death to Albanians”, as well as other racist and hateful manifestations. Such actions do not occur when they come to our country.

There are other good examples, such as the organization of film festivals and exchange of artistic groups, tourism and other fields, that show that the common people love and respect each other. However, real progress is made when the political climate is not an obstacle, but establishes the proper climate for communication and contacts. Therefore, only in this way can we build bridges of understanding and eradicate hatred among the people in the region.

The role of religious prelates in this process is important, because they have the right impact on people, especially those in rural areas, so that there can be more affinity among them. They should stay as far as possible away from nationalistic and revanchist tendencies, something that unfortunately is rare. I appreciate and fully agree with the request of the Vice Prime Minister of Serbia exhorting the leaders of the Orthodox Church of Serbia not to oppose and exert pressure against the new policy towards solving the issues with Kosovo.

It has been noticed that the main politicians of the Western Balkans have made optimistic declarations recently aiming at positive developments in the relations between the countries in the future. However, in the meantime, we all know that the words do not always correspond to the reality. The recent declarations of the President of Serbia and its foreign minister contain some elements that should catch our attention. They both underline that, to solve the Kosovo issue, both sides should make concessions and sacrifices. When discussing the solution to something complicated there should naturally be reciprocal concessions, however it is already clear which side is the more damaged. Consequently, reciprocity is a must in such a case, but if the process is to be fair, the concessions will never be equal. This is even more important when one side aims at saving “the Nail of Nasr El Din”. That is why if we truly want and look for real solutions to these problems, pure sincerity is a must. Let us not forget that every solution that is not fair always leaves open a possible return to the starting point.

Thus, I do not want to hear declarations from Serbian politicians that remind us of the tango, i.e. one step forward and two steps back. Such attitudes are not only undesirable, but also create the impression that the real solution is far away and that this distance is artificially maintained simply based on internal conjectures, aiming at maintaining power and not peacefully solving the issues through discussion.

In true parliamentarian republics, the parliament plays an important role and has a great deal of power and, for this reason, as I mentioned in the beginning, this initiative, the IAPP, is of the utmost importance if it is carried out successfully. What we saw in London, in the halls of Westminister, where many important members of the House of Commons of the UK spoke with dedication and enthusiasm in support of this initiative of UPF gives us much hope that here in our region we can also follow a similar path.

The fact that, at this meeting, we have important personalities from several countries in the region shows that we are all interested in building the proper climate to establish an organized and real spirit that could lead to increasing the degree of understanding among the people and the politics of the region’s nations.

We know that this will not be an easy path, that there are still many obstacles ahead of us, but it is not impossible. Those who are determined to do good deeds for their country and their neighbors will surely achieve their goals with strong will and hard work. This is a positive beginning that should be expanded on and continued. The sweat and effort will never be lost; I am optimistic about this. Knowing the culture of my people and that of the Balkans in general, I can say that we are on the right path toward the establishment of good relations among ourselves.

Thank you very much!