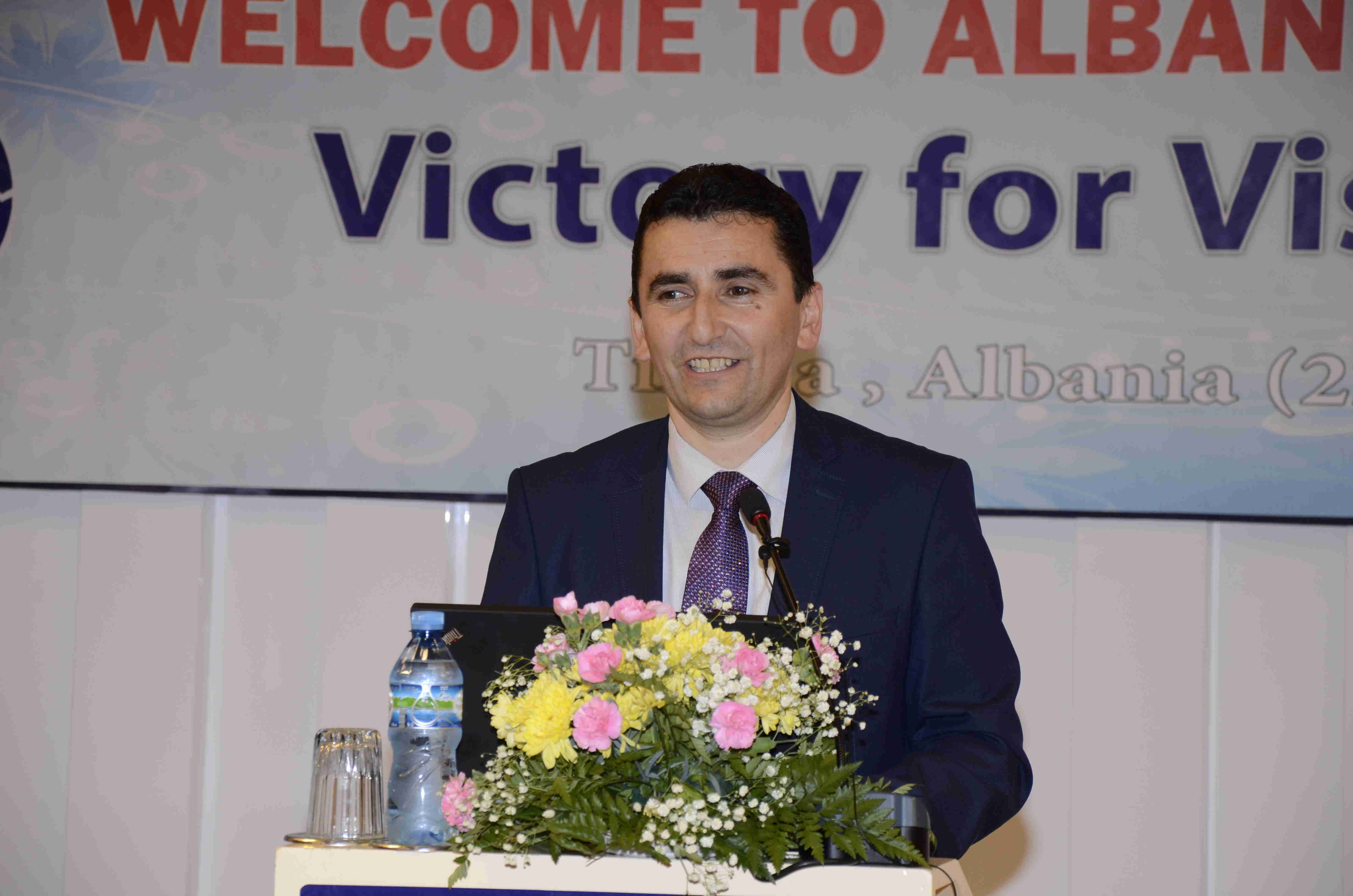 The fifth session was moderated by Mr. Gani Rroshi, the president of the Family Federation for World Peace and Unification in Albania.

The first speaker was Professor Dr. Shezai Rrokaj from Albania, a former rector of Tirana University, currently a dean of the history and philology faculty. Too little investment currently is made in educating youth in the values of brotherhood and conviviality, he said. The education system is not fulfilling its mission of youth education and integration. Some even use history to feed extreme nationalist feelings to innocent young people. Peace starts from oneself, offering love instead of hatred, tolerance instead of intolerance, integration instead of division, appreciation for the neighbor instead of disdain, he said. A lot of energy was lost in communist times, when the country closed itself and truths about neighbors were distorted. He suggested that governments should encourage and finance a revision of school textbooks to update them and clean up historical distortions. We need more courage to accept each other’s truths, learn from negative experiences and benefit from positive ones, he said.

Mr. Siniša Ruzicic, a journalist, football coach and chess master from Serbia, and a UPF Ambassador for Peace, stated that without justice there will be no peace in the Balkans. The challenge lies with young people. He deplored corrupt practices in education and politics, and the dire consequences they have for youth, who indulge in destructive lifestyles. Technological progress leads to impoverished communication among young people, he regretted. He pleasantly recalled the day, 38 years ago, when he skillfully initiated a conversation with the young lady who became his wife. He went on to describe the gloomy future that politicians offer to youth, and spoke about the painful dismemberment of Yugoslavia. International law was not respected, he said, and power became the rule. If we follow rules, as in sports, he concluded, the world would be much better for everyone.

Hon. Ismail Kurteshi, a member of Parliament of Kosovo and an educator himself, opened his speech with quotations on the importance of education as “the best protector of freedom.” Albanian Renaissance leaders put education as the priority for their platform, he said, and the fact that Balkan nations are lagging behind is due to the stagnation of educational systems. Most of the ills of society are caused by uneducated people, he said. Aware that supporting education is an investment for their future, advanced countries put forward a lifelong learning system. Balkan countries should prioritize education and cultural development, he suggested, and cultivate among youth the desire to work in cooperation and solidarity at all levels. Better-educated youth will be willing and able to solve issues facing our nations, within and among them, he said.

Mr. Marijan Orsolic, the co-founder and editorial board member of the Web portal Prometej, deplored the fact that in his native Bosnia, a culture of walls still prevails over a culture of bridges and dialogue, particularly in the realm of education. There are 13 different educational policies in a country of less than 4 million people, he said. Two separate schools may use the same buildings, and there is an identity war in classrooms through ethnocentric curricula. According to the NGO Save the Children, 50 percent of all peace agreements in the world fail because of neglecting the educational system, he warned. Regarding the crucial issue of religious education, there is a heated debate between advocates of purely confessional education in religious settings and advocates of teaching a broader culture of religion. But a third way is possible, he said: developing interreligious education in schools, in cooperation with religious communities. He outlined the benefits of such interreligious education in schools, notably the prevention of extremism, the promotion of integrative values in society, and the fact it could be better monitored by the state. Two most serious problems affect education in Bosnia, he concluded: the brain drain of youth leaving the nation, and the depopulation. There are about 300,000 fewer children registering in elementary school today than 25 years ago. Civil society and the religious community should be partners to make a culture of bridges, he recommended.

The last panel speaker was Ms. Lediana Mertiri, a Youth Ambassador for Peace who earned a master’s degree in the Albanian language at Tirana University. She described her participation in a volunteer project of the Family Federation for World Peace (FFWPU), an organization affiliated with UPF, entitled “Beauty and Variety” that was sponsored by the Youth in Action program of the European Union, attended by 20 participants from Albania, Kosovo, Macedonia, the United Kingdom and Italy. As they together served children in a local Albanian school and listened to each other’s presentations about their nations, they began to overcome prejudice and see each other as real people and friends, she explained. One Kosovo participant with a strong prejudice against people of Serb origin had a real change of heart when she became seriously ill and was healed through the care of a young Macedonian doctor who was a participant. Ms. Mertiri also praised the Albanian prime minister’s initiative, before a sensitive match against Serbia, to invite Serbian youth to spend a week in Albania to overcome prejudices. As such personal experiences are shared with friends and communities, she concluded, such projects should be expanded and supported by the media.