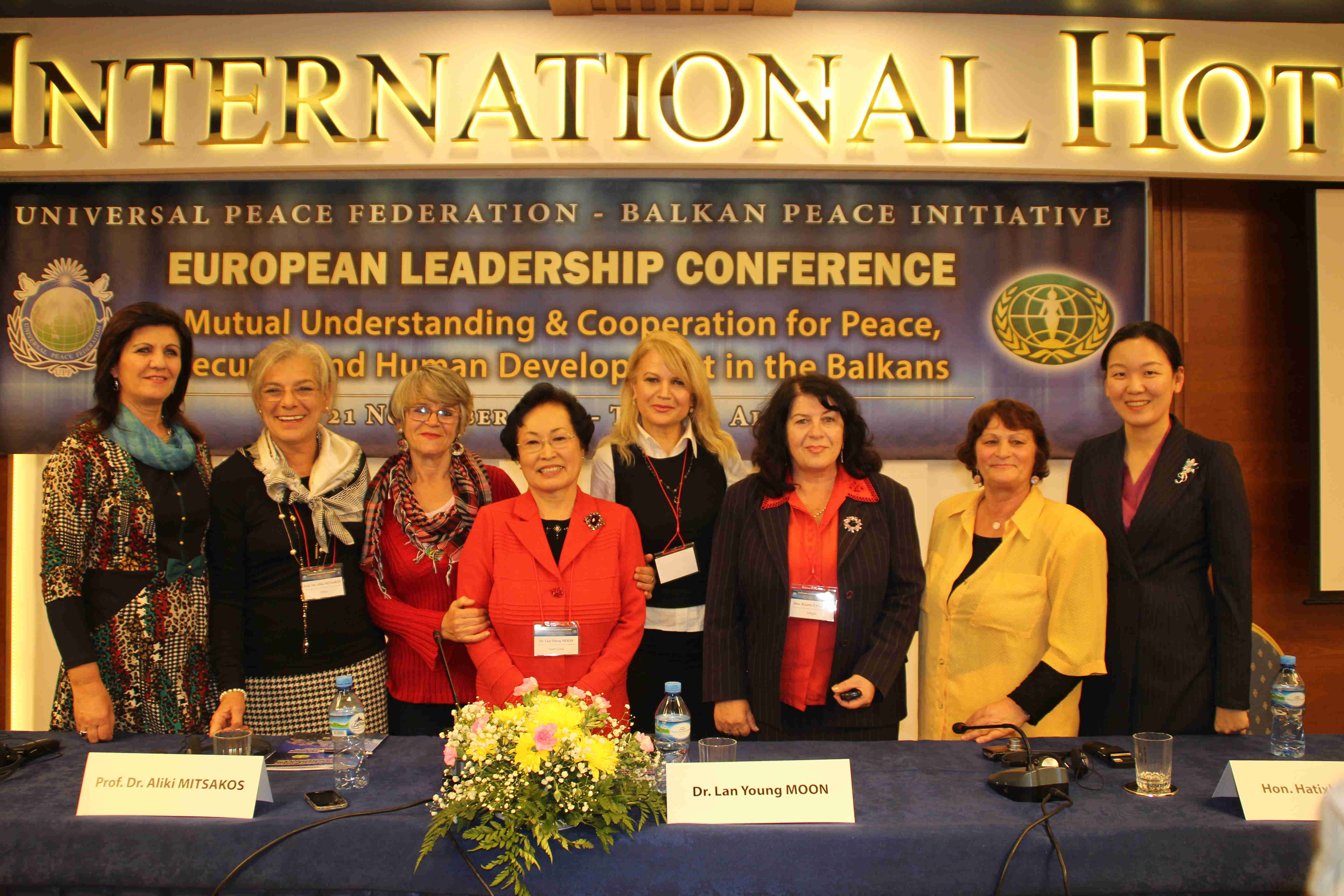 The fourth session was moderated by Mrs. Saemira Pino, a former deputy minister of education and the deputy chair of UPF-Albania, who commented on how the vision of peace of the UPF founder had bloomed in so many directions and brought together people from so many different backgrounds and disciplines.

Professor Dr. Aliki Mitsakos, the founder and dean of the International Center for Leading Studies in Greece, said that she had long been involved in gender issues and human security. Women provide for human security, she said. The family, the basic cell of society, is the place where continuity and inheritance take place, and where women play a central role. But a main issue in recent years has been education, she said. There are many schools and academic degrees available, but what is needed is a broader education, providing a philosophy of life that allows one to appraise oneself and one’s surrounding, she said. Women today should be able to move into all professional positions, but most essential to them is that philosophy of life allowing them to experience security and provide it to people around them—especially to the younger generation. Current crises, whether economic, social or terrorist, she concluded, are caused by the absence of such a philosophy of life.

Hon. Hatixhe Hoxha, a former member of Parliament and the chair of UPF in Kosovo, said that gender issues cannot be dealt with unless men also are emancipated. Without an emancipated community of men, we cannot have an emancipated society. She went on to recall some of the Albanian women who made a difference in history, such as Queen Teuta in the 3rd century BCE, Mother Teresa, and all those who contributed to the cultural renaissance of Kosovo and its independence. Women’s rights, she said, can be protected only by strong democratic institutions, which punish crime and violence. But in the Balkans, women often were violated in wartime. She expressed her conviction that intense efforts should be made to educate women, young women in particular, in order to increase employment opportunities and their participation in public life, which is one of the UN Sustainable Development Goals.

Professor Dr. Shekerinka Ivanovska, the dean of the Faculty of Economy at the International Slavic University in Macedonia, gave a broad overview of women’s role in securing lasting peace. She reviewed studies describing women’s specific capacities for leadership in a complex world. From the second half of the 20th century, women have moved to the highest levels of political power and have been able to get scientific education. However, the world’s women still face challenges, she said: Among the poorest and the illiterate in the world, two thirds are women, and their overall share of managerial positions is still minor. Only 20 percent of members of Parliament in the world are women, she said, with some major European nations being at the bottom of the list. Quoting a study, she said: “Women leaders are more likely to spend money on improving health, education, infrastructure and eradication of poverty and less likely to waste it on tanks and bombs,” concluding that the fastest way to world peace is to mobilize women. She emphasized the key role of women in the development of the family, saying, “The greatest punishment for human beings is the wrong path taken by children.” Happiness is loving one’s motherland, she said, but why should that love stop at the borders?

Professor Lan Young Moon from the Republic of Korea, the president emeritus of the Women’s Federation for World Peace International, explained that six of the eight Millennium Development Goals proclaimed by the UN in 2000 were related to women and children. Today, she said, to fulfill the new 17 Sustainable Development Goals, the unique leadership capacities of both men and women, and their partnership, are very much needed. She testified to the sacrifice and achievements of WFWP volunteers around the world, based on motherly love. She then recalled her experience as a North Korean refugee girl, when she lost her father, brother and relatives during the Korean War. Through practicing Rev. Dr. Moon’s teaching and guidance for a half-century, she said, she eventually could free herself from anger and hatred. Only true love can solve such problems, she said. She described her visits to North Korea and the 1% Love Sharing humanitarian project she initiated to support the North Korean people. A culture of peace will come only through the joint efforts of men and women, centered on God and loving each other, she concluded, but sweat, tears and passion also are needed.