Chisinau, Moldova - A conference entitled “Eurasia-Europe Dialogue for Peace” took place Dec. 5-7, 2014 in Chisinau, Moldova. Before an audience of 120 participants, in a major hotel of the Moldovan capital city, the conference was opened by the First Lady of Moldova Mrs. Margareta Timofti; she was followed by distinguished guest speakers from Austria, Belgium, Great Britain, Moldova, Netherlands, Russia and Ukraine.

This was the fourth in a series of Europe-Eurasia conferences initiated at the UPF founder’s request in 2011. The first conference was held in Moscow in April 2012 on the theme of multiculturalism and attended by high-level representatives from both regions. On that foundation, in October 2012, a large conference on partnership between Europe and Russia was held at the UN headquarters in Vienna, Austria. The president of the Austrian Parliament sent her greetings, the Russian ambassador to Austria came to address participants, and distinguished speakers took the stand during the two days of the conference.

In December 2013, with the co-sponsorship of the Permanent Mission of Tajikistan to the European Union and UNESCO and several NGOs, a third conference was held in Paris. At that time the Ukraine crisis had just begun. Although the first president of Ukraine Leonid Kravchuk had to cancel his participation due the Maidan revolution, the first lady of Moldova attended the conference along with prominent participants from Azerbaijan, the Baltic nations, Moldova, Russia and Tajikistan as well as western Europe.

The Ukraine crisis underlined the importance and relevance of the UPF series of Europe-Eurasia dialogue meetings. As the conflict over Ukraine territory worsened and a dangerous stagnation developed in the Donetsk region, the UPF-Eurasia headquarters proposed that a fourth conference be held in Moldova to address the crisis and discuss a process of reconciliation.

Moldova, just like Ukraine, stands at the center of the power struggle between Russia and Europe. When the Soviet Union dissolved, a part of Moldovan territory, Transnistria, broke away and remains under Russian influence. The political situation in Moldova has been tense ever since, with opposing pro-Russia and pro-Europe factions competing for power. The recent parliamentary elections on November 30 confirmed the current pro-Europe majority, but by a slight margin.

In these circumstances, the fourth UPF conference on “Europe-Eurasia dialogue” was both a source of expectation and concern: would the conference be able to avoid an open confrontation between Russian, Ukrainian and Moldovan participants? UPF-Eurasia invited prominent Ambassadors for Peace from these three nations; they came with a mindset of dialogue, and although everyone expressed frankly their positions, debates were handled serenely.

The conference began informally on the evening of Dec. 5, with a gathering of early-arriving guests and staff; they were greeted by the co-hosting UPF regional leaders of Europe and Eurasia, Rev. Paul An and Rev. Jin Hwa Chung. 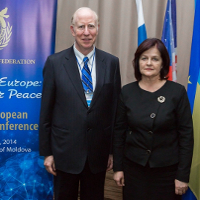 On the morning of Dec. 6, the first session was opened by First Lady of Moldova Mrs. Margareta Timofti and by Rev. Chung. UPF international President Dr. Thomas Walsh moderated the session. Dr. Nicolae Osmochescu, from Moldova State University, a former government minister and ambassador, focused on the role of the UN in the current conflict. Mrs. Valentyna Yefremova, from the Ukraine Culture Foundation, spoke passionately about the territorial integrity of her country. Russia was represented by Dr. Aslambek Aslakhanov, the former head of the International Affairs committee of the Russian Senate and an advisor to President Putin on the North Caucasus. He expressed the need for objectivity to find a solution to the conflict, regretting the extreme positions taken by the warring factions.

Europe was represented by Dr. Robert De Wijk, a prominent expert in geopolitics from the Netherlands and founder of The Hague Center for Strategic Studies, who spoke on the broader context of the Ukraine crisis, and by Dr. Leo Gabriel, director of the Institute for Intercultural Research and Cooperation in Austria. Dr. Gabriel had had personal contacts with both sides of the conflict in Ukraine and proposed that a peace dialogue between the two sides could be organized in Moldova, which caught everyone’s attention. The first lady of Moldova was carefully listening to the presentations and stayed throughout the whole day of the conference.

Each of the four sessions featured speakers from Moldova, Russia, Ukraine and Europe. Other European participants and presenters were: Mr. Azim Ostowar, a young human rights activist from the Netherlands who spoke about the plight of minorities in Europe; Mr. Jacques Marion, UPF-France president, who shared about the role of interreligious dialogue and the family in peacebuilding; Dr. Walter Baar, an Austrian demographer who spoke on the evolution of family patterns in Europe; Ambassador Robert Vandemeulebroucke, a distinguished retired ambassador from the Belgium Foreign Ministry, who gave concluding remarks on successful examples of intercultural cooperation throughout the world; and Humphrey Hawksley, a well-known BBC world affairs correspondent, who summed up the discussions with an attention-catching evaluation of the Ukraine conflict.

Other Russian presenters were: Dr. Vladimir Petrovsky, a political scientist from the Russian Council on International Affairs, who brilliantly shared his vision about the future of the Eurasian Union in formation; Dr. Sergey Kuchinsky, a council member of the Assembly of the Peoples of Russia, who spoke on the process of intercultural dialogue in Russia; and Mr. Sergey Suprunyuk, the head of the Supermarathon for Peace association, who reported on their sports for peace activities – notably their St. Petersburg-Kaliningrad Peace Marathon that crossed the three Baltic nations in the summer 2014 - stimulating a request to organize such programs in conflict-ridden Ukraine.

Ukrainian presenters also included Dr. Victor Soldatenko, from the Ukraine Academy of Sciences, who shared about the current process of running economic affairs in Ukraine, and Dr. Oleksandr Sagan, from the Ukraine Institute of Religion Studies. Moldovan presenters were Dr. Otilia Stamatin, a respected pedagogue and long-time associate of International Educational Foundation and UPF character education programs, who shared about inter-ethnic dialogue in Moldova; Dr. Vasile Capatana, a parliamentarian and member of the Writers Union of Moldova and Romania; and Dr. Pavel Cerbusca, deputy director of the Lyceum of the Academy of Sciences of Moldova, who had invited some of his top students to the conference, two of whom concluded the day with a brief report, in English, on their peace studies activities.

The audience actively participated through questions and discussions, sometimes responding emotionally to Russian presenters with whose views they disagreed. However, at the end of a long day, everyone agreed that the Dialogue for Peace had been useful and fruitful. Due to the presence of the first lady and international delegates and the importance of the theme, the entire conference was covered by national TV and reported twice on the news that day.

Dr. Thomas Walsh concluded the event by expressing his appreciation for the high level of debates and gave an overview of UPF’s vision and activities in support of the peace process; he notably reminded of the importance of dialogue among religious leaders and cooperation between religious and political leaders.

A fifth Eurasia-Europe dialogue conference will be held in Europe in 2015.