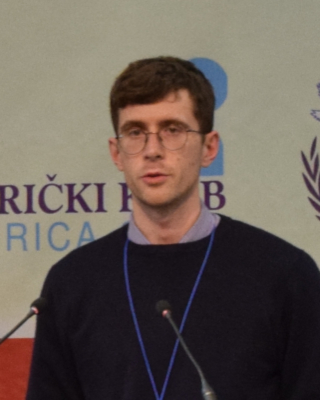 Thank you, Mr. Rroshi, for your introduction. I feel honored to speak to this very special audience about what is happening in my native country of Ukraine.

All of us were very shocked when, on the 24th of February, Russian military forces crossed our border and began to attack our cities. Although in history Russia and Ukraine generally have had a close relationship, this action may divide our nations for centuries to come.

I am a believer in the Divine Principle, the spiritual ideal of the Unification Movement, which was founded by Dr. Sun Myung Moon and Dr. Hak Ja Han Moon, and whenever I face some difficulty, I try to understand what would be the best response. In my faith, we have been taught to look at things not only from a human perspective, but to try to understand how God, our Heavenly Parent, looks at the situation.

It has been a very difficult process for me to find answers in this situation. However, two things come to mind, which I believe are very important.

The first is justice. There can be no doubt that the actions of the Russian government toward Ukraine are evil. No matter what explanations are being propagated by the Russian media, there is no way that this assault on Ukraine can be considered as anything but evil. The reaction of the United Nations supports such a view: Only four nations voted to support Russia, and the vast majority opposed the Russian decision or abstained from voting.

Another thought that comes to mind is to look at this situation from the point of view of God, our Heavenly Parent, who considers all humankind to be His children. There are now over 10 million displaced Ukrainians, including more than 3 million women and children who have crossed the border into neighboring countries, leaving behind their husbands, fathers, sons and brothers to defend the nation. This is heartbreaking. And then we have to look at the numbers of deaths. So far it is estimated that thousands have died. This is truly a national catastrophe and an international emergency, and the world must stand with Ukraine against this evil.

How should we feel toward the Russian people? First of all, those who ordered this disastrous action must be held accountable. Secondly, the Russian people need to know what is being done in their name, and then they must stand up and call their leaders to account.

As a follower of Dr. and Mrs. Moon, I look to their example of relating with their enemies, and in this case, how as Koreans, they dealt with the North Korean regime. In 1991 they traveled to Pyongyang to meet Chairman Kim Il Sung and reached out in an effort to find a solution to the divided peninsula. In essence, North Koreans were not the enemies of South Koreans as much as they were victims of a false ideology and an oppressive dictatorship.

It could be said that Russians similarly are victims of false propaganda and also an oppressive dictatorship. The young Russian soldiers who found themselves in the middle of a war in Ukraine were lied to by their own government and their military superiors and had no choice but to fight and kill, or be killed. What a desperate situation. Although these young men have committed grave crimes and many thousands of them have died, we have to feel compassion for their parents and relatives, as we do for the Ukrainian victims of their actions.

Ladies and gentlemen, I hope and pray that this conflict soon will come to an end and that we can work on the physical and emotional healing process so that such a war never occurs again on European land or elsewhere.