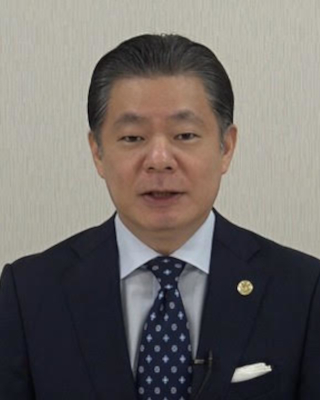 Distinguished leaders of Europe, Middle East, and Korea. Thank you for inviting me as a speaker of ILC Webinar Series organized by UPF-Europe and Middle East. On behalf of UPF-Japan and The International Highway Foundation, I would like to express great appreciation for the organizer of this session.

Rev. Sun Myung Moon first announced the project to 800 scholars from more than 100 countries around the world that gathered at the 10th International Conference on the Unity of the Sciences on November 10th, 1981, in Seoul, Korea.

Through this grand project, Rev. Moon’s aim was to build a unified economic zone, a new civilization that unifies the East and the West, and a truly peaceful world. These were to be accomplished by creating an “Asian Highway” that links Japan, the Korean Peninsula, and China; and it would, then, expand to the rest of the world, where it would develop into an “International Highway” that links to the world’s highway systems.

According to his vision, eight kilometers on either side of the International Highway would be a neutral zone, an inviolable area where no country could interfere, where freedom beyond national borders would be guaranteed. Through an underwater tunnel, this project would connect Japan and Korea—two countries separated by sea.

Dr. Eizaburo Nishibori was invited by one of his associates, an American scholar, to participate in this international conference where this grand project was announced. Dr. Nishibori was a famous engineer and researcher who worked for such companies as Toshiba. He met with Rev. Moon at this conference and was deeply inspired after hearing his speech. Two years later, he appointed his trusted companion, Dr. Yasuo Sasa, as the first president of the Japan-Korea Tunnel Research Institute. Dr. Sasa was a leading expert in underwater tunnels and served as a technical adviser in the construction of the Seikan Tunnel—the world’s longest undersea tunnel. The Japan-Korea Tunnel Research Institute was established in this way, and it is currently engaged in research activities with former Minister of Justice Taizo Nozawa serving as its fourth chairman.

Prior to the institute’s launch, the International Highway Construction Corporation was established in 1981 to undertake the actual construction operations, and geological and route surveys began soon after. At that time, the agency owned a 6-seater Cessna—the Sky Hope—and three research vessels—Teian Maru. The survey was carried out from land, sea and air, making full use of these crafts.

Based on the vast amount of data collected through these surveys, the Japan-Korea Tunnel Research Institute compiled a report in 1996 for the tunnel project, in which it determined the route and construction method. The starting point of the Japan-Korea Tunnel is said to be Chinzeimachi-nagoya of Karatsu City in Saga Prefecture. A groundbreaking ceremony to begin the tunnel excavation was held on October 1st, 1986, with scholars, engineers, and other affiliates from Japan and Korea in attendance.

After that, there were several interruptions, but construction of the tunnel has proceeded, and currently 540 meters in length have been dug 56 meters below the surface. The plan is to drill another thousand meters, connect it to an advanced shaft, and then, to drill a working shaft and main shaft.

In response to Rev. Moon’s proposal in 1981, the Chinese government took great interest in the project and approached the International Highway Construction Corporation. At the invitation of the Chinese government, Mr. Gentaro Kajikuri, then-Chairman of the International Highway Construction Corporation, met with then-Vice President of China, Mr. Wang Zhen. Mr. Wang echoed the idea of an international highway, and immediately responded to possible difficulties in convincing North Korea by saying, “That will be my responsibility.”

In addition to promoting the International Highway and Japan-Korea Tunnel Project, Rev. Moon proposed the Bering Strait Tunnel Project in 2005, at the founding of the Universal Peace Federation. This is also a grand initiative that looks to connect the Bering Strait between Alaska in the United States—another symbol of the division of East and West—and Siberia in Russia. They will be connected with tunnels and bridges, and to the rest of the world through the International Highway and Japan-Korea Tunnel, which will help create a single community.

At the opening plenary of World Summit Africa 2018 held in Dakar, Senegal, Dr. Hak Ja Han, the wife of Rev. Sun Myung Moon, said, “Therefore, I am advocating a Peace Highway, which will travel from the south of Africa, from the Cape of Good Hope, through Africa, Europe, Eurasia, and Asia, connecting all the way to Korea.” In this way, the Japan-Korea Tunnel has been proposed and referred to, not only in Japan, but also internationally. However, I believe that there are three issues that need to be overcome in making this tunnel a reality.

First, an agreement between the governments of Japan and South Korea, as well as gaining the understanding and public opinion of the Japanese and Korean people—which will form the basis for this agreement—will be required. Understanding from the U.S., other countries, and the international community will also be necessary.

Second, the project must prove that it can be a sustainable business.

And third, the technical issues need to be overcome. Although research has proved excavation is possible, further investigation is required in order to determine other construction technologies and timeframes.

As I just mentioned, the first challenge is to reach an agreement between the two governments. In order to do so, public opinion must first be formed in Japan to propel lawmakers to make the Japan-Korea Tunnel into a national project. With that goal in mind, councils were formed in all 47 prefectures to promote the Japan-Korea Tunnel, and based on this foundation, a movement was launched to make this into a national council. Currently, the prefectural and national councils are working to reach an intergovernmental agreement within this decade.

That’s all I have to share. Thank you very much.