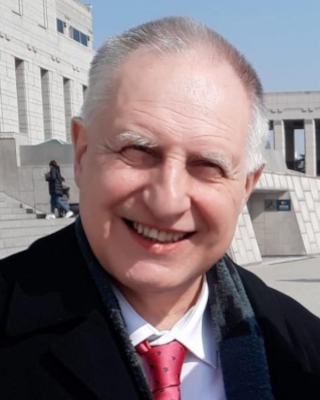 Thank you, Elisabeth, for introducing me. I am very grateful I was invited to this session. I am honored I can share our experience from our last Peace Road. I would like to speak about our recent experience and Peace Road project among three nations.

Last June, UPF of Austria, Germany and the Czech Republic organized a Peace Road on the common border of these nations. The purpose of the Peace Road is to bring peace and reconciliation among nations and people. We are living in a globalized world, which means that the nations and people should find the way to live-in peace, harmony and how to cooperate. Unfortunately, there are still conflicts on the local or regional level. We need to overcome conflicts, resentment, and the legacy of conflict among nations. Reconciliation among nations is very important.

These thoughts brought us to organize a unique Peace Road among three neighboring countries. We understand that the reconciliation and peace process also need some action. Germany, Austria, and the Czech Republic have had a long history of living together as neighbors. Our nations have a very rich and long history, over one thousand years long. Usually, our nations were living peacefully. However, there were times when there was a lot of suffering and pain in the relationships on all sides.

The second world war was unprecedented in human history. Hitler’s Germany attacked many European countries and caused a lot of human tragedies and suffering. This happened also in the Czech Republic. However, after the second world war, the Germans living in the Czech Republic had to leave the country. The way it was done and how they were treated was not smooth and created a lot of resentment, hatred, and pain. We needed reconciliation. Now, this problem of resentment is more or less solved, and our nations can cooperate.

Next, there was a time when our nations were divided ideologically and politically. The emergence of communism after the second world caused the cold war. After 40 years, in 1989, communism collapsed in Europe and a new era started in this continent. The artificial hatred has been overcome, and the European countries started to cooperate.

We can see that there were two kinds of problems among our nations to overcome. One was the situation shortly after the second world concerning the Germans and Czechs, the other was later when the countries were divided between democracy and communism. As we can see, both problems were overcome.

Nevertheless, we should not forget that there is still one country in the world where these problems persist and where the nation and country are divided ideologically and politically. This country is Korea. The 38th parallel still divides the country and is a borderline between communism and democracy. We cannot speak about the peace in the world if one country is not free.

We hope that it is possible to overcome these obstacles and go forward and create a better future.

We hope and believe that one day the Korean people will meet and unite as we could meet at the border of our three nations.

We hope that our Peace Road, prepared with the cooperation of three nations, will send a strong signal of hope for the reunification on the Korean peninsula.

Since 2012, the Universal Peace Federation all over the world holds Peace Road projects to interconnect nations, countries and people based on good will and a desire to create unity. The motto of the UPF is interdependence, mutual prosperity, and universal values. Based on these values, we hope to find ways that humankind can work together and prosper, and gain happiness. We hope that today's gathering will contribute to these noble goals. We want to send a signal for reconciliation and unity in the Korean peninsula.

Now I would like to show you a short video from our Peace Road that took place on the border of Germany, Austria, and the Czech Republic on the 20th of June 2021, which is declared as the Day of refugees.