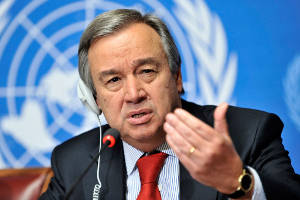 New York, United States—UN Secretary-General António Guterres has given a speech emphasizing the role of religious leaders in preventing extremism.

On July 18, 2017, Mr. Guterres gave the opening remarks at a panel discussion organized by the United Nations Alliance of Civilizations (UNAOC) on the theme “The Role of Religious Leaders in Peacebuilding in the Middle East.”

Addressing leaders of the three Abrahamic faiths, he said: “As Muslim, Jewish and Christian religious leaders, you have the opportunity to teach the shared humanistic values of tolerance, understanding, compassion and peace.

“These are the core values embraced by all three monotheistic faiths represented here today, and they can be the catalysts for peace.”

Since September 2000, when then-Secretary-General Kofi Annan emphasized the role of religion and culture in his UN Millennium Development Goals, there have been discussions about more actively involving religions at the United Nations.

In August 2000, at an assembly on the theme “Renewing the United Nations and Building a Culture of Peace,” UPF co-founders Rev. Dr. Sun Myung Moon and his wife, Dr. Hak Ja Han Moon, first proposed establishing an interreligious assembly or council of spiritual and religious representatives within the structure of the United Nations as it assesses and addresses the perplexing and challenging problems facing humanity.

Rev. Dr. Moon emphasized: “World peace can be fully accomplished only when the wisdom and efforts of the world’s religious leaders, who represent the internal concerns of the mind and conscience, work cooperatively and respectfully with national leaders. … The wisdom and vision of great religious leaders will substantially supplement the political insight, experience and skill of the world’s political leaders.”

The UPF proposal complies with the mission of the United Nations and its Millennium Development Goals, as well as the Sustainable Development Goals adopted by the UN General Assembly in September 2015, which seek to address global problems. UPF maintains that any successful strategy for peace must consider the substantial spiritual dimension of our human identity. An interreligious council could significantly empower the United Nations to deal with root causes of conflict and violence by directly addressing religious issues.

On October 7, 2007, at a high-level dialogue on interreligious and intercultural understanding, then-Secretary-General Ban Ki-moon emphasized: “It is time to promote the idea that diversity is a virtue, not a threat. It is time to explain that different religions, belief systems and cultural backgrounds are essential to the richness of the human experience. And it is time to stress that our common humanity is greater—far greater—than our outward differences.”

Under the leadership of Mr. Ban, several high-level meetings held at the United Nations addressed the topic of interreligious dialogue and reconciliation. A resolution was introduced at the 70th UN General Assembly in 2016 to implement a Plan of Action to Prevent Violent Extremism. This plan of action promoted the use of intercultural and interreligious dialogue to prevent extremism.

The current secretary-general, António Guterres, recently went a step further in stressing the important role of religious leaders in resolving conflicts. On July 14, 2017, Mr. Guterres launched at the UN Headquarters the first-ever action plan specifically designed to enable religious leaders to prevent and counter incitement to violence: the Plan of Action for Religious Leaders and Actors to Present and Counter Incitement to Violence That Could Lead to Atrocity Crimes.

The plan of action was developed over two years of intensive consultations at the global and regional levels organized by the United Nations Office on Genocide Prevention and the Responsibility to Protect, with the support of the King Abdullah bin Abdulaziz International Center for Interreligious and Intercultural Dialogue (KAICIID), the World Council of Churches (WCC), and the Network for Religious and Traditional Peacemakers.

A total of 232 religious leaders and actors from 77 countries took part in the consultations. Participants included Buddhists, Christians, Hindus, Jews, Muslims, and Sikhs from different groups and denominations, as well as representatives from various religious minorities, including Bahá'í, Candomblé, Kaka'i, Yazidism and humanism.

The July 18, 2017, panel discussion organized by the UNAOC served as a follow-up to the November 2016 Summit of Religious Leaders for Peace in the Middle East, held in Alicante, Spain—an initiative facilitated by the Spanish government and sponsored by the UNAOC.

The summit resulted in the adoption of the Declaration of the Alicante, Spain, Summit for Religious Peace in the Middle East. The declaration encourages the contribution of civil society to peace between Israelis and Palestinians. In recent years, the UNAOC has been an official partner with Universal Peace Federation at the United Nations regarding high-level discussions on interfaith relations and the Sustainable Development Goals.

Click on this link to read the speech of Mr. António Guterres at the UNAOC panel discussion, “The Role of Religious Leaders in Peacebuilding in the Middle East”, United Nations Alliance of Civilizations, New York, July 18, 2017.