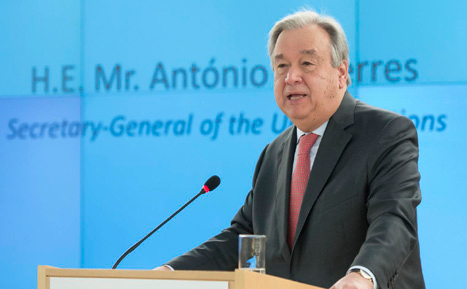 The 11th President of the Human Rights Council, Joaquín Alexander Maza Martelli, welcomed the largest gathering of dignitaries in the Council's history to the 34th Human Rights Council in Geneva. The HRC’s annual session debuted on February 27 and ended March 24. This month-long council yielded nine panel discussions, over 130 considered reports under the various items in the Council's agenda, and more than 250 side events held by member states and NGOs.

Notable highlights of the HRC34 included the three-day high-level segment, the annual report on the global human rights situation, the President of the General Assembly's address, and the newly appointed United Nations Secretary-General's speech.

On March 8, Zeid Ra'ad Al Hussein, United Nations High Commissioner for Human Rights, provided the session with a noteworthy assertion: the rights in human rights law are, and must be applied, universally. The principles of non-discrimination, he explained, are enshrined in the United Nations Charter in the second paragraph of the Preamble and human rights should be viewed as "the necessary starting condition.” He noted the increasing numbers of people who now "know they have a right to development, to decent food, water, health, housing, education and more." He implored the international community to protect that progress. "We have much to lose,” said the High Commissioner.

Concerning the "bloodshed at the hands of extremist and terrorist groups," he urged the United States to conduct more anti-terror operations in accordance with international human rights and humanitarian law. While he highlighted some recent improvements in countries like Gambia, Tunisia, Uzbekistan, Greece, and China, he addressed several concerns, like religious and culture rights restrictions, increased threats against human rights defenders, and human rights violations, in other parts of the world as well. In order to fulfill the Sustainable Development Goals, he accentuated the importance of cooperation and commitment to human rights.

The 2030 Development Agenda, which envisages the end of extreme poverty, increased prosperity, empowerment of women, and climate change, was the central theme of the seventy-first session of the General Assembly.

The President of the General Assembly, H.E. Mr. Peter Thomson, addressed the "growing appreciation at the international level that insufficient attention had been given to prevention," and stressed how the work of the Council was vital in creating an environment that would both sustain peace, the protection of human rights, and allow sustainable development to be implemented simultaneously. Ensuring accountability for human rights violations was emphasized on several occasions.

Finally, the UN’s newly appointed Secretary- General, António Guterres, addressed the growing disregard for human rights in the world, tackling root causes of conflict, early on and more effectively, through prevention, and the need to strengthen Member States, institutions, and civil society, by actively promoting human rights. "The challenges of today’s increasingly dangerous, unpredictable and chaotic world – the multiplication of conflicts and their interconnectedness with the threat of global terrorism and violent extremism, human rights abuses, and massive inequalities within and between States – could only be tackled if prevention was made the priority,” argued the Secretary-General.

While the HRC34 covered a plethora of themes, including the right to privacy, rights of persons with disabilities, rights of minorities, and rights of children, the issues most heavily discussed were discrimination, development (SDGs and the right to development), and refugees and migrants.