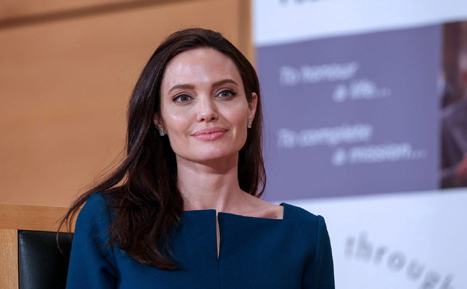 In the context of the 34th Human Rights Council, Special Envoy for the United Nations High Commissioner for Refugees, Angelina Jolie, delivered the annual Sergio Vieira de Mello Foundation Lecture. She urged all participants to strengthen their commitment to diplomacy and to the United Nations.

This annual lecture, which is held around the 15th of March, is dedicated to pursuing the ideals and continuing the unfinished mission of Sergio Vieira de Mello, who worked for the UN for over 34 years. He earned respect and praise around the world as a highly effective humanitarian leader and was considered a likely candidate for UN Secretary-General before his death in 2003. Sergio, along with 21 of his UN colleagues and associates, was killed in the bombing of the UN Headquarters in Bagdad.

BBC's Lyse Doucet chaired this year's lecture, starting off with a brief introduction to Sergio's legacy. She then introduced the keynote speaker, Angelina Jolie, and the current High Commissioner for Refugees, Filippo Grandi, who mainly served as a discussant to Jolie's speech.

Angelina Jolie, while famously known as the successful Hollywood actor and director, represented UNHCR as a Goodwill Ambassador from 2001 to 2012. The UNHCR recognized her hard work and appointed her Special Envoy in 2012. She has dedicated many years to the UNHCR and the cause of refugees in the world. Whilst most of her work focused primarily on the refugee crisis, her special address at this year's Sergio Vieira de Mello Foundation Lecture focused on a larger problem at hand: a world of imbalance.

Her speech, entitled “The Defense of Internationalism,” served as a reminder of the UN's purpose while highlighting several key issues that are birthing instability, disunity, and injustice in the world.

Instability, she noted, is caused by the lack of unity between citizens and their respective governments, as well as the ever-growing gap between those raised in wealthy, democratic countries and those living in war-torn, famine-stricken areas of the world. On top of that, "narrow-minded nationalism is being disguised as patriotism."

"On a global scale, the levels of conflict and lack of solutions combined with the fear of terrorism, has brought a strong sense of insecurity," she added. "The reality is that globalization has brought fast benefits to some and worsened a lot for others.”

Many countries, as she pointed out, are willing to help those in need, yet do not see things through for financial reasons, lack of commitment or international leadership. "Arrest warrants are being issued, yet not implemented - other crimes ignored all together." She illustrated her point with the example of South Sudan and how it was ushered into independence by the international committee but then largely abandoned before it could successfully transition under a peaceful sovereign.

Jolie spoke strongly about the importance of taking responsibility over the things that are said and done. She urged participants to take initiative, strengthen their commitment to diplomacy and to the UN, and perhaps consider a reform of the UN that will be more effective in the future.

As a self-proclaimed internationalist and proud American, and in spirit with the ideas behind the creation of the United Nations, she quoted, "a strong nation - like a strong person - helps others to rise up and be independent."

In conclusion, she made one final request. “The UN should stay true to what it stands for,” referring to the UN’s genesis on a basis of coming together and tackling global issues as a team.

"We need more UN, not less," Lyse Doucet reiterated after Jolie had delivered a "speech that goes beyond call of duty" in front of a room filled with world leaders, diplomats, students, and members of Sergio's family. Her full talk can be viewed at webtv.un.org.